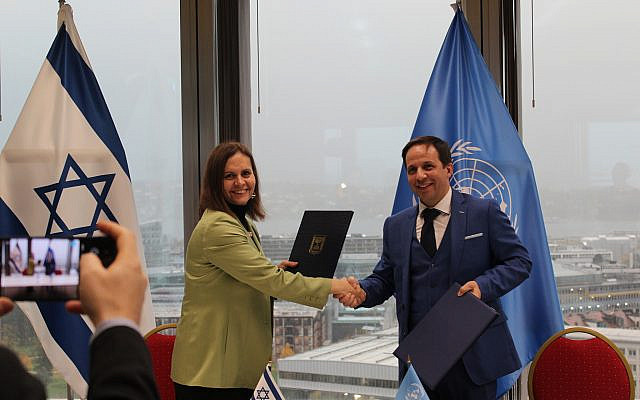 On Wednesday 23 November, the Israeli Ministry of Foreign Affairs’ Personnel Training Department and the University for Peace – established by the United Nations General Assembly in 1980 – signed a Memorandum of Understanding to create academic programs and modules on mutual interests for Israeli Diplomats and employees of governmental agencies dealing with international relations.

The agreement was signed by Ambassador Meirav Eilon Shahar, Permanent Representative of Israel to the United Nations in Geneva and Ambassador David Fernandez Puyana, Permanent Observer of the University for Peace to the United Nations and other international organizations in Geneva, in representation of its Rector, Francisco Rojas. The MoU will be renewable every three years and will build on the previous collaboration between the State of Israel and the University for Peace.

Ambassador Meirav Eilon Shahar stated that “the University of Peace has played a positive role in our region, especially since the signing of the Abraham Accords. In recent years, UPEACE and Israel have partnered on several initiatives to promote peace and strengthen the collaboration between the signatories of the Abraham Accords in the multilateral arena. Our shared values of understanding, tolerance and peaceful coexistence are the backbone of our partnership, which will be reflected in the new programs developed for Israeli officials.”

Ambassador David Fernandez Puyana underlined that “this current MoU will open new opportunities for mutual cooperation between the Israeli MFA Personnel Training Department and the University for Peace. This agreement will also allow us to provide better skills and tools for diplomats, who are the real practitioners on the ground. This agreement signed today at the United Nations is proof and reflection of our aspirations for and commitment to peace and dialogue.”

About the Author
Dr. David Fernández Puyana was born in Spain and is a practitioner and international lawyer specialized in international human rights law, international relations, peace studies, United Nations and civil society movements. He earned a Phd with European Mention and he has also a Degree on Law & Philosophy, as well as, some Masters on Human Rights (Essex, Alcala de Henares and Barcelona Universities). He served as adviser at the UNESCO Liaison Office and the Permanent Mission of Costa Rica to the UN in Geneva. As a legal assistant of the Chairperson-Rapporteur of the UN Intergovernmental Working Group on the right to peace, he was one of the architects of the Declaration on the Right to Peace adopted by the UN General Assembly in 2016. He advises Paz sin Fronteras and is Professor of Public International Law at Abat Oliba University CEU. Since June 2018, he serves as Ambassador and Permanent Observer of the University for Peace established by the UN General Assembly to the UN and UNESCO. He is also nominated Gender Champion.
Related Topics
Related Posts
David Fernández Puyana