My wife kicks my leg under the dinner table whenever guests rail against opponents of Netanyahu and critics of Israel.  The U.N. and college students are also favorite targets.  “Save your contrarian opinions for your articles, not the dinner table,” she reproaches me.  I’m pretty black and blue, as you might imagine.

This abridged dinner talk reflects the mounting impatience among many Israelis. A siege mentality has set-in following years of political, social and intellectual attacks from Jews mostly living abroad, foreign leaders, artists, and pundits. The claque denounces the existence of the State and our moral character. Critics go way beyond simple expressions of differences in how Israel runs its country and treats its non-Jewish populations. Israelis are upending the framework of the five stages of grief so we can live again with ourselves like we did with joy and pride after the Six Days War.

This siege mentality incubates from the politics of fear. Israelis are moving past denial, anger, bargaining, depression and telling our Diaspora family this is who we are; recognize and accept our pride and patriotism, move here and make the changes you want or shut up. We know many of you are collaborating with enemies of our State, and we now reject you.

Israelis Are So Angry

I have noticed a palpable shift in attitude in the six years since we made aliyah.  For instance, staunch Israel advocate Alan Dershowitz threatens to no longer attend Israel public forums, because audiences, particularly American attendees, boo and shout down critics of Israel. Israelis give shrinking quarter to the likes of Natalie Portman, Peter Beinart, and Jeremy Ben-Ami.  Michael Chabon is now totally out of the picture.  One of Israel’s most famous Anglo op-ed weekly commentators goes so far to question the loyalty and patriotism of Israel’s military leaders and former elected officials who publicly disagree with Israel government policies.

Israelis scoff when they hear claims from abroad that we love Israel but do “not want to appear as endorsing Benjamin Netanyahu.”  Israel is becoming an apartheid state.  Israel disproportionately punishes Arabs (implying that Israel is militarily strong and Arabs are Keystone Cops).  In Israel, this is code for the country and Jewish people being creatio ex nihilo, led by craven schemers with perfidious policies.  Israelis are flummoxed when they hear Diaspora critics speak vengefully about Israel’s formidable response to terrorists dressed in t-shorts and flip-flops.  Israelis believe that Diaspora Jews just don’t get it, and Israelis are caring less.

Anglo-olim, especially Shabbat-observant vatikiim (antiques or seniors), trend right of center.  They are angry and fed up with Jews back home.  The largest English- speaking synagogue in our community distributes Moshe Feiglin’s weekly newsletter.  The rabbi promotes Feiglin’s political views from the pulpit. At the risk of overstepping, Feiglin wants to buy out or forcefully remove from all of Eretz Yisroel Arabs unwilling to swear allegiance to the Jewish State.  Pundits predict that Feiglin will be a force to reckon with in the next Knesset election.

Four unshakable principles of faith that Diaspora Jews will never appreciate and about which Israelis will not compromise are:

The widening divide between Israel and the Diaspora is taking on new momentum, as Israelis are reacting by writing-off Diaspora Jews as a family. It is now a dysfunctional family.

For Every Action, There’s a Reaction: Kiss Mine Tuchus

Anglo-olim and many native Israelis are convinced that Likud in general and Netanyahu, in particular, keep Israel safe from existential threats. His administration effectively spreads Israel’s hasbara and corrals Europe’s innate hatred of Jews, Zionism, and Israel.  Our people are prideful about the government’s wildly successful strategy convincing many Americans and a growing number of Africans and Latin and South Americans that Israel holds the high moral ground. They admire the Israeli government and despise Diaspora Jews moaning and whining from afar through the media. Kinder gentler Israelis are telling them

Please don’t talk about me when I’m gone
Oh honey, though our friendship ceases from now on
And listen, if you can’t say anything real nice
It’s better not to talk at all is my advice

But the kinder gentler attitude has worn thin. Replacing it is the attitude of KMT memorialized by Michael Steinhardt. He is the co-founder and major funder of Birthright Israel.   Steinhardt, without saying a word to protesters blocking his entrance outside an AIPAC gala dinner, flashed his middle finger at protesters and triumphantly marched into the hall.  Steinhardt’s flip of the finger sums up the mood in much of Israel. 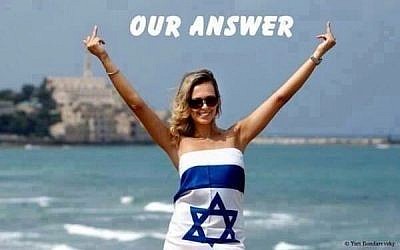 Don’t Talk about Me When You’re Gone

Make no mistake: Israelis engage in vigorous debate about Netanyahu’s policies and political elbowing.  He holds office by a razor-thin majority.  The other half of the nation focuses on deficits in living and working conditions. We want a resolution for peace with the Palestinians. Israelis, though, are largely convinced that land for peace, freeing prisoners for peace, and silk glove actions in Gaza and the West Bank are failed projects. Diaspora Jews are less often meaningful contributors in these conversations because to Israelis their misology makes these tangential stakeholders sound like wailing keeners.

I am extremely proud of two American gap year students I taught in Mideast politics, who for their final project, made a video that in part is poignantly critical of Israel’s failings and missteps, but in discussion, the students echoed the thoughts of Winston Churchill from 1947:

[W]hen I am abroad I always make it a rule never to criticise or attack the Government of my own country.  I make up for lost time when I come home[.]… At home we must do our duty, point out the dangers, and endeavour so to guide the nation as to avoid an overwhelming collapse.  But I have no patience with Englishmen who use the hospitality of a friendly nation to decry their own.  I think this is a very good principle and one that deserves general attention.

I tell my students to argue any government policy you want, but never raise Israel’s right to exist.  I stopped trying to convince Holocaust-deniers and Israel-haters otherwise.  The Steinhardt move, the vaunting finger, is my common response to Israel-haters.

About the Author
Dr. Harold Goldmeier manages an investment firm, is a former Research and Teaching Fellow at Harvard University, and teacher to international university students in Tel Aviv. He served in the administrations of US governors and the Surgeon General, works as a commerce and industry consultant, writer, and public speaker.
Related Topics
Related Posts
Comments