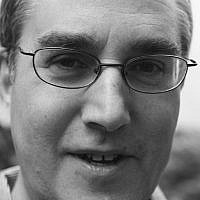 The Blogs
Don Futterman
Apply for a Blog
Please note that the posts on The Blogs are contributed by third parties. The opinions, facts and any media content in them are presented solely by the authors, and neither The Times of Israel nor its partners assume any responsibility for them. Please contact us in case of abuse. In case of abuse,
Report this post.

Who should you vote for if you are a Jewish Israeli leftist or leftist-centrist? Many leftists and centrists I know are experiencing the same dilemma I find myself in; elements of the ideal party are spread across the playing field but that there is no perfect fit.

The conundrum begins with the party leaders and the almost visceral reactions they evoke.

“I can’t stand her (or him)!” is what I frequently hear (although don’t feel myself) about Labor’s Shelly Yachimovich, Yesh Atid’s Yair Lapid, and Hatnuah’s Tzipi Livni, usually from the same folks who are fans of one of the others. (Even Meretz’s Zehava Galon provokes this feeling, but not as strongly). I have no idea what these comments are based on, but voting is an emotional act, so if the face of the party is considered a self promoter, a bitch or a failure, there’s a problem.

Nobody seems to dislike Kadima’s Shaul Mofaz, but they don’t take him seriously either, and his campaign is evoking more pity than passion. Hadash’s Dov Khenin garners great reviews from the minority who know who he is, but most Jewish Israelis won’t vote for a party that hoists the red flag in 2013 or that’s Jewish-Arab, let alone both.

Meretz has the right values; they want a two state solution, social services instead of settlements, equality for Palestinian citizens of Israel, civil rights and economic justice. But they seem irrelevant. They won’t head the opposition, don’t have a charismatic leader and are not likely to have much impact. They insist on trying to address problems that most Israelis are sick of hearing about. It’s true, the problems are all still there, but Meretz hasn’t adjusted its rhetoric, and does not seem to have noticed how well Naftali Bennett is doing preaching Zionism. So, do we vote our values (most of them anyway), boost Meretz and risk feeling that we’ve wasted our vote, or look elsewhere?

The newly reconceived Labor Party, according to the polls, will be the largest of the left or centrist parties, and could lead a powerful opposition or be (uh-oh… we’ve slipped down this slope before) a moderating force on Netanyahu from within the government. It depends on your take on Shelly Yachimovich and her rebranding strategy. She’s turned Labor into a single issue party, economic justice a la the social protest, with an umbilical link to the Histadrut. Has she removed Labor’s two-state solution centerpiece in order to woo more centrist voters turned off by any mention of the conflict? Or so that she can join a Netanyahu government despite recent protestations to the contrary? Does Shelly deserves credit for sticking to her strategy and attracting new voters with dynamic young candidates like Stav Shafir, Merav Michaeli and Itzik Shmueli , or has she destroyed the soul of the Labor party? Is this a tactical maneuver or an authentic shift? (I think the latter, but Netanyahu will continue to insist she wants to divide Jerusalem.) So vote for Labor and give them more leverage, or look for a party that does not shun the “L” word (leftist).

Perhaps Labor can’t find its peace platform because Tzipi Livni took it. Livni’s Hatnuah is the only party putting peace first, promising to parlay Livni’s past stature to bring Israel back to the negotiating table and reduce our international isolation. And she’s added green politics, a new- found concern for workers and economic justice, and Amir Peretz, an an old-style former Labor Party head, Histadrut leader, and mizrachi leader from the perhiphery. But Livni was outmaneuvered by Netanyahu four years ago and maybe outflanked by Yachimovich and Lapid last week. Like everyone on the left, she doesn’t have a plan to deal with Hamas. She was a dismal Opposition leader, despite heading the largest party in the Knesset, and rarely fought anti-democratic legislation, some of which originated in her own party. So do we attribute that to the incoherent character of Kadima? Or do we trust that she’s learned her lessons and is now ready to lead?

Lapid’s Yesh Atid has a clear platform; drafting ultra-Orthodox Jews and sharing the military service burden, electoral and educational reform (his number two is an education activist, low-cost housing for young couples and lower utilities. Lapid, an intelligent talk show host and fine writer, gets dissed for being slick, shallow, good-looking and well connected; his father was a famous journalist and head of the Shinui Party; his mother an established novelist. He won’t talk about peace because conditions are unfavorable, a reasonable position since conditions are unfavorable, but it’s not clear what he would do to change those conditions. But he’s a fiscal conservative, rejects the social protest, and can’t seem to wait to join the Netanyahu government. Perhaps if he and Shelly and Tzipi (or two out of three) go in, they can replace the far right and ultra-orthodox partners. Perhaps.

So who to vote for? The fear is that all dithering will keep leftist and centrist voters in their own homes, while the right fills those long lines to the ballot box next Tuesday.

About the Author
Don Futterman is the Program Director, Israel for the Moriah Fund, a private American foundation which has worked in Israel for more than 20 years for the empowerment of disadvantaged communities, to promote civil and human rights, and to strengthen Israeli civil society. Don is also the founding director of the Israel Center for Educational Innovation (ICEI), which operates a whole school reform program to turn around under-achieving Israeli elementary schools with high concentrations of pupils from the Ethiopian immigrant community. ICEI Initiatives currently operate in 17 schools in seven cities. Don’s writing has appeared in numerous publications and he can also be heard bi-weekly on the Promised Podcast, a review of Israeli politics and culture for anyone who wants to understand Israel beyond the headlines, along with Dr. Noah Efron, Dr. Eilon Schwartz, and Dr. Emily Silverman
Comments