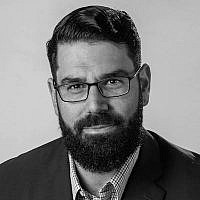 The Blogs
Dan Feferman
Apply for a Blog
Advertisement
Please note that the posts on The Blogs are contributed by third parties. The opinions, facts and any media content in them are presented solely by the authors, and neither The Times of Israel nor its partners assume any responsibility for them. Please contact us in case of abuse. In case of abuse,
Report this post.

Relations with American Jewry and Democrats were strained during former Prime Minister Netanyahu’s tenure, partly due to his need to placate a religious-right coalition and a presumptuous assessment that American Jewry was in decline and Democrats had already rejected Israel.

The Religious-Zionist and Haredi (ultra-Orthodox) parties, Netanyahu’s stalwart allies, rejected pluralistic Judaism. Torpedoing the construction of an egalitarian worship space at the Western Wall was just one example.

Netanyahu made a calculated gamble regarding the growing political divide in American politics. He saw the rise of the progressive, anti-Israel movement within the progressive wing within the Democratic Party as a fait accompli, as Republicans grew more staunchly pro-Israel.

When he forged close ties with Trump, after a particularly stormy relationship with the Obama administration, the divide widened. Of course, Israeli prime ministers must work closely with all American presidents, regardless of party. However, Netanyahu hitched his wagon to the Republicans Party, with its large contingent of Evangelical Christians and Orthodox Jews, sidelining the more challenging connection to liberal Jews and Democrats.

According to the recent Pew study, however, 70% of American Jews are either Democrats or politically liberal and are (still) largely supportive of and connected to Israel.

It also seems that Netanyahu and his advisers exaggerated the influence of anti-Israel progressives within the Democratic party. Yes, the polls show an increase, and younger American Jews are less connected to Israel than their older generations. But this too has been overstated. We know, through educational programs like Birthright Israel, that such gloomy prophecies needn’t be self-fulfilling.

The Bennett-Lapid coalition, which excludes the Haredi and hardline Religious Zionist parties, offers an opportunity for a reset. Prime Minister Bennett, although a hawk on security issues, tends more toward the “liberal” side of the religious spectrum (despite being Orthodox). He has personal connections to liberal American Jewry and served as Diaspora affairs minister. Longtime champion of Israel-Diaspora ties Nachman Shai is the new Diaspora Affairs Minister.

This Knesset also includes the first-ever Reform rabbi, Gilad Kariv. This is, in addition to others who are either left-leaning or centrist and align with the views of many American Jews on issues relating to religion and state, LGBTQ rights, climate change, and safeguarding Israel’s democracy and the rule of law. Yair Lapid, the alternate prime minister and current foreign minister, has long championed these issues too.

In an attempt to restore bipartisan support for Israel, Bennett recently appointed Brig. General (Ret.) Michael Herzog as Israel’s ambassador to Washington. Herzog, a former adviser to four defense ministers and a gifted negotiator, is well regarded in the United States.

Israel and American Jewry were also fortunate with the election of Joe Biden, a centrist and pro-Israel Democrat. over some of Biden’s challengers who would have been critical of Israel, or if Trump would have won reelection.

American Jewish organizations have also lauded the broad representation of Israeli society in this coalition. Such diversity can help shift perceptions and remind American Jews that there are indeed many like-minded Israelis.

Keeping in mind that Bennett’s Yamina (“Rightward”) party and Gidon Sa’ar’s right-wing New Hope party are key members of the coalition, it is difficult to imagine any serious policy shifts on most core issues important to American Jews and Democrats. This is especially so regarding the Palestinian issue and the fate of the West Bank settlements.

However, we could see movement on matters of religion and state and religious pluralism. With the Haredim and religious conservatives out of the government, the pivotal Religious Services Ministry is now in the hands of the more liberal Yamina party. The new minister Matan Kahana has already announced plans to introduce a series of much-needed reforms in the public sphere: From supervising kosher certifications to conducting and authorizing conversions. Moreover, Bennett has made clear his intentions to revive the Kotel compromise as a gesture to liberal American Jewry.

There are inherent limits to what Israel can and should do to reach out to American Jews and Democrats. Israel is a majority Jewish state in a tough neighborhood; American Jews are a welcomed minority in a country that eschews a national ethnic religious identity. Israel should base its policy on critical national security matters and not on the opinions of those who don’t vote.

And yet, we should not overlook the power of rhetoric and goodwill in restoring relationships. Even if no movement is expected on some issues, the makeup of the current government and the timing of the current administration in Washington offer a crucial and rare opportunity for a reset in the strained relations with American Jewry and Democrats more broadly.

About the Author
Dan Feferman is a Fellow at the Jewish People Policy Institute in Jerusalem. He is a major (res.) in the IDF, having served as a foreign policy and national security analyst and adviser, and as an intelligence analyst. He co-hosts the “Jewanced podcast.”
Comments