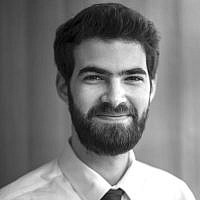 The Blogs
Shahaf Rabi
Former Founding Director of ICSTK
Apply for a Blog
Advertisement
Please note that the posts on The Blogs are contributed by third parties. The opinions, facts and any media content in them are presented solely by the authors, and neither The Times of Israel nor its partners assume any responsibility for them. Please contact us in case of abuse. In case of abuse,
Report this post.

One of Raphael Ahren’s, the Times of Israel’s diplomatic correspondent, recent articles was titled “Israel sends warm wishes, but no aid, to tsunami-stricken Indonesia.” After I read it, I thought people might be interested in a brief historical overview of what could be called: Israel’s Disaster Relief Diplomacy.

In 1957, the then Israeli Foreign Minister, Golda Meir, returned from a diplomatic tour in Africa, and established a division within the Ministry of Foreign Affairs named MASHAV – the Hebrew acronym for Israel’s Agency for International Development Cooperation (IAIDC). At least officially, MASHAV’s guiding principles were always two: moral and political. First, the activities presented Israel as a nation following Jewish traditional-ideals, in which it provided moral guidance for the world (some referred to it as a policy of “light unto the nations” [or la-goyim] or tikun olam). As such, it operated mainly in developing countries in order to help them improve their educational, agricultural and medical situations. Second, it was a form of expression as well as advocacy of Israel’s political interests. After all, the aid helped Israel to form diplomatic relations with a larger array of countries, which was particularly important in the earlier years of the state. Consequently, Israel also cultivated economic affairs and even (sometimes) influenced the way countries voted in the international arena (e.g. United Nations).

It was already in 1957 when Israel provided aid to Turkey, after the country experienced a severe earthquake, albeit the development assistance was mainly allocated to the Black-Africa countries. Israel eschewed helping South Africa as it practiced the infamous institutionalized system of racial segregation (apartheid). This aligned with the principles very well. Israel took a moral stand against the apartheid regime, and politically, it had more to benefit from siding with the Black-Africa nations than merely one state. The affairs between Israel and these countries truly blossomed for years. However, it all but withered in the seventies.

The pivot point – quite a complete reversal of the diplomatic relations – occurred in the year 1973. Israel fought in the Yom Kippur war against the alliance of Arab nations, led by Egypt and Syria. Egypt was a transcontinental nation, as most of Egypt’s territory was in Africa and its Sinai Peninsula territory was in Asia. Prior to the war, Israel already held territory of the Sinai Peninsula (due to the Six Days war of 1967), yet it did not cross the Suez Canal, and therefore, it was not within Africa. As a part of the war, Egypt crossed the canal and pushed Israel back, though eventually, they were deprived of all of their military’s gains. In fact, as the war progressed, Israel brought the war deeper into Egyptian territory, past the Suez Canal. The fact Israel waged war within Africa triggered a rush of African states to break off their ties with Israel (although some had alternative and/or additional reasons other than their sympathy and support for their fellow African nation, Egypt).

Even after the situation settled, and Israel withdrew its forces out of Africa, the relationships were not rehabilitated. At this point, realpolitik prevailed and the moral position was abandoned. Israel gradually magnified its ties with South Africa in spite of the fact South Africa maintained the apartheid regime.

However, this should be considered in context of the circumstances of these years. Israel was still developing as a country back then, with a developing economy. There were positive economic aspects, but also quite some negative ones before the 73′ war. For example, Israel had a sizable security spending (the security-spending of 73′-75′ were record breaking in Israel’s entire history), the state debt was growing, inflation, as well as rising oil prices. In fact, Israel also had to allocate additional funds off its budget to develop an arms manufacturing industry since France imposed an arms embargo on the region, which mainly harmed Israel. The entire set of conditions at that time, on top of the damage to the economy due to the Yom Kippur war, caused the harsh post-war economic situation. Without further unneeded elaborations, the years 1974-1985 were not labelled “the lost decade” for no reason. The economic situation was terrible. Additionally, the Iranian revolution of 1979 terminated the prospering Israeli-Iranian relations, which was especially beneficial economically for Israel (oil trade and military projects). Hence, the South African courtship proved successful in the end. The country had a big Jewish community, and Israel truly needed the benefits of trading with South Africa (which also bought a great deal of arms).

Since that time, Israel began to shift the aid activities to disaster relief operations. This diplomatic policy utilizes Israeli strengths such as mobile, high-quality search-&-rescue and medical support. It helps reflect a positive image of Israel. It minimizes the risk of exposure for criticism while capitalizing on the high profile coverage, with the possibility of tightening relations and harvesting political achievements in the future.

Moreover, in 2015, Israel provided assistance to Guatemala after a natural disaster struck a town in the country. During Sara Netanyahu’s diplomatic visit to Guatemala earlier this month, she participated in several events related to these efforts. And while I do not argue one such activity resulted with Guatemala’s decision to open an embassy in Jerusalem just two days after the U.S. opened its embassy, such activities may indeed help to form and warm relations between countries, which, at times, actually lead to political accomplishments such as this.

Circling back to the tsunami which struck Indonesia several days ago and the Israeli decision not to offer aid: Indonesia is a huge country (with approximately 230 million Muslims and 26 million Christians). It has no diplomatic relations with Israel. It is a country Israel tried to establish relations with for decades, but to no avail. While Israel provided aid in the past to Indonesia, it denied to receive official help from Israel (the aid was transmitted through NGOs, such as the Red Cross). So even if Netanyahu, the P.M., the Minister of Defense, Minister of Foreign Affairs (etc.), would have liked Israel to have “excellent relations” with Indonesia, I find no fault with the Israeli decision not to offer them assistance this time. They suffer myriad natural disasters there, Israel’s courtship of Indonesia could continue in the future.

About the Author
Shahaf Rabi is the former Founding Director of the Israeli Center for the Study of Targeted Killings, University of Massachusetts Dartmouth. He runs the Security Studies Review (www.securitystudiesreview.com). Reflecting his research interests, topics often written about include: future of warfare, targeted killing, innovation of armed organizations, and more.
Comments