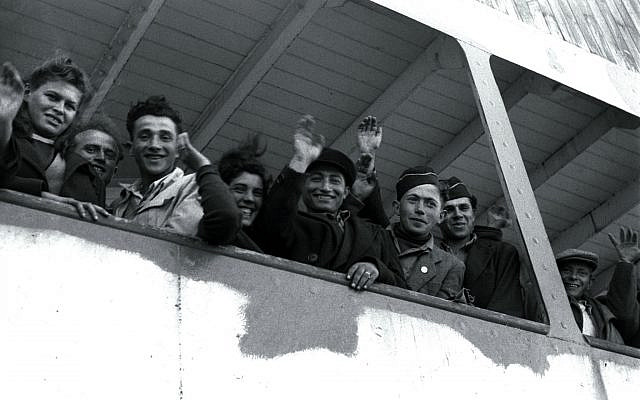 Newly arriving Jewish refugee from the Nazi Holocaust wave from the ship "S.S. Awarea" as it pulls into Haifa port on April 6, 1948, five weeks before David Ben Gurion declared Israel a state on May 14, 1948. The ship brought in immigrants who had been stopped en route to Palestine after World War II and held in camps in Cyprus. Israel has absorbed well over two million Jews in its first 50 years, immigrants from Europe, the Middle East, North and South America and Africa drawn by the promise of shelter from adversity in the diaspora or a better Jewish way of life. They include 250,000 survivors of the Holocaust, Hitler's genocide of one third of the world's Jews.

Israel faces an identity crisis. Over the years we have followed without much thought the rules imposed by the British Mandate after the Ottoman period in the Land of Israel. It has been a natural precedent to carry on, an easy and convenient one. However, the conditions for the governments of other nations cannot and will not suit us here. Therefore, we keep failing time and time again, from government to government, and have yet to get it right.

Nowadays it is already clear to everyone — for better or for worse — that we are a unique people. The world does not allow us to be like other peoples, and Israel is likewise revealed as a country that cannot be like all other countries.

The State of Israel must build itself and its form of government in accordance with its unique character and identity. While the current conditions in Israel are characterized by social havoc, by unruly hatred similar to that which erupted between us in the days of the destruction of the Temple, love of others and the unity of the people above all else is still the requisite state to which we must aspire. We are a nation founded on the supreme commandment to reach love above hatred, to transcend self-interest and to establish good mutual relations between us.

“By these will the State be judged, by the moral character it imparts to its citizens, by the human values determining its inner and outward relations, and by its fidelity, in thought and act, to the supreme behest: ‘and thou shalt love thy neighbor as thyself.’ Here is crystallized the eternal law of Judaism, and all the written ethics in the world can say no more. The State will be worthy of its name only if its systems, social and economic, political and legal, are based upon these imperishable words.” (“Rebirth and Destiny of Israel”)

Ben-Gurion was right. The Supreme Providence will not allow the State of Israel to function according to the conditions of other countries. Pressure will be put on us until we begin to fulfill our destiny. We must understand who we are, what is expected from us, what our role is towards the nations, and govern accordingly. The question is: will we reach such an awareness in a positive or in a negative way, out of awakening and consent on our part to connect as one people, or out of anguish from internal and external pressures?

In order to avoid insurmountable divisions leading to terrible civil war, we must internalize the fact that the basic laws of the people of Israel are the spiritual laws of mutual care and unity.

This fundamental value must be the backbone of every governmental decision, law, and its implementation. From the top downwards, the idea of ​​unity must permeate all avenues of Israeli society. Just as we care for our children’s intellectual upbringing regardless of their socio-economic background, we must provide education to build good and harmonious relations between all members of the nation, to establish close ties connecting each and every one of the people. This law of mutual responsibility and love is the founding principle of our people and should be our lasting recipe for success.

About the Author
Michael Laitman is a PhD in Philosophy and Kabbalah. MSc in Medical Bio-Cybernetics. Founder and president of Bnei Baruch Kabbalah Education & Research Institute. Author of over 40 books on spiritual, social and global transformation. His new book, The Jewish Choice: Unity or Anti-Semitism, is available on Amazon: https://www.amazon.com/Jewish-Choice-Anti-Semitism-Historical-anti-Semitism/dp/1671872207/
Related Topics
Related Posts
Comments
Advertisement