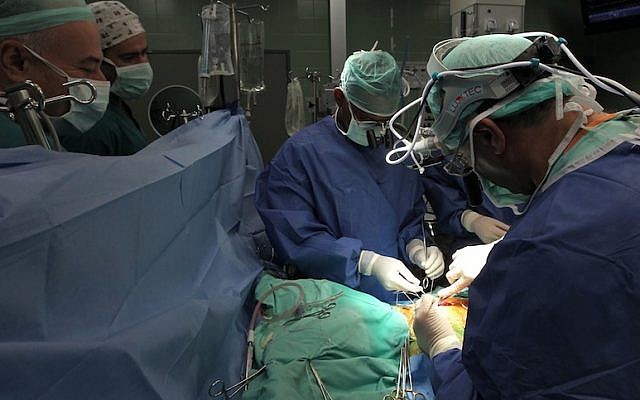 Illustrative. Doctors perform surgery on a patient at the Wolfson Medical Center in Holon. (Nati Shohat/Flash90)

Israel’s overburdened health system is stretched beyond its already extended limits during the winter, when severe outbreaks of flu sweep the country, unattended colds rapidly turn into pneumonia and complications of simple aches and pains multiply. This year, the unusual severity of these ailments highlights the ingrained inadequacies of Israel’s justifiably vaunted medical services. Nothing exemplifies Israel’s crisis of governance more painfully than the imminent collapse of this infrastructure.

If there is one issue that unites all Israelis of every religion, background, and political persuasion, it is the importance they attribute to health. Nary a conversation ends without the ultimate salutation: “Only health” (rak bri’ut). Vituperative debates are often tempered by reference to “the most important thing is health” (ha-ikar ha-bri’ut). The preservation of human life (piku’ach nefesh), even at the expense of basic religious injunctions, remains paramount. Israel’s medical delivery facilities, perhaps more than any other institution in the country, therefore constitute a microcosm of its diverse society. Here, Israelis of all walks of life come into contact with each and interact. It is ironic, therefore, that clinics and hospitals have come to embody not only all that is beautiful, advanced and innovative in the country, but also all that is distorted, wrong and failing. The curing of the medical system is a critical first step in ensuring Israel’s overall societal and governmental health.

The symptoms of the sickness that has pervaded Israeli medicine and threatens to bring down its capacity to govern are, by now, legion. Every citizen has experienced, at one point or another, at least one of its multiple manifestations. Who has not waited for hours to receive emergency care or to be transferred to a ward after being hospitalized? How many have witnessed an intubated patient lying helplessly in the corridor? What relatives have not been annoyed as their dear ones have called out for help while frazzled medical caregivers have been occupied elsewhere? When was the last time you secured an appointment with an orthopedic specialist or a plastic surgeon in a reasonable amount of time? And how much bureaucracy has been involved in getting approval for crucial procedures if you have not been able to pay for them directly?

The veteran journalist Keren Neubach has made it a point to broadcast a new litany of health-related trials and tribulations on a daily basis to magnify the severity of the problems and to highlight both their human and systemic features. The indignities suffered by many of the sick and the infirm and the aggravation of relatives and friends are compounded by the frustration of medical personnel who cannot extend the kind of treatment they would like to give. There is hardly one facet of the public health system that is not in a state of disrepair: the number of beds is inadequate; the doctor-patient ratio, once one of the highest in the world, is at an all-time low; the availability of the latest instrumentation outside a handful of major hospitals is wanting; accessibility to advanced medical treatments in outlying areas is meager; everywhere demand outstrips supply; and, sadly, the scarcity of resources favors the rich and the connected at the expense of the disadvantaged and the disempowered. The ranking of the quality of Israeli medicine is among the highest in the world; its availability is diminishing constantly.

These points are driven home in one exceptionally heart-rending plea by Dr. Eitan Hai-Am, former director-general of the Ministry of Health and ex-director of both the Soroka Medical Center and Assouta, in an article published in Haaretz a month ago, in which he describes how, “from a proud, clean and respectable father and grandfather, I have been transformed into an old man, devoid of honor, thrown into a hallway unshaven and emitting a bad odor. That is not the way I wish to be remembered.” He beseeches his loved ones: “Leave me alone; don’t come to visit me. Farewell. Love, The Old Man in the Corridor (near the intensive treatment room).” His sentiments have been echoed by the Israel Association of Internal Medicine, which warned that should the current situation of overcrowding (in some instances spiking to 150% of capacity) and under-staffing continue much longer, they will be forced to strike and absolve themselves of responsibility for the well-being of their patients.

These dire circumstances are an outgrowth of misplaced priorities, poor planning and ongoing neglect over many years by multiple governments. These have been compounded by contradictions in the system (such as the ingrained inconsistency between the government as the regulator of medical services and its role as one of the key health providers), a growing propensity to encourage private medicine — along with the social inequities this entails (the discrimination against Arab visitors arriving at Barzilai hospital is a case in point). The result is that the most important component of human security in the country, its physical health, is now in an exceptionally precarious state.

This does not have to be. In broad strokes, there is a general consensus on the remedies needed to rectify Israel’s eroding health care and moving it forward (even if there is disagreement on some details). The outlines of such a program were recently presented by Deputy Minister of Health Yaakov Litzman and adopted by the government. These include a significant rise in the number of hospital beds (with an immediate addition of 200 beds within the next year — still far below projected needs), a more rigorous accreditation process for medical graduates from abroad (involving clinical as well as theoretical tests), an overall increase in medical personnel, a tangible growth in subventions for cutting-edge treatments; a substantial overall budget increase, and a commitment to the design of a comprehensive long-term plan for the future.

There is nothing very new in these proposed measures. They have been suggested in the past and, at best, only partly implemented. There is no reason to believe that they will be pursued more vigorously now, especially on the eve of the forthcoming general elections. What has been woefully lacking has been a willingness to undertake the steps needed to put such a plan in motion. It is precisely at this sensitive juncture that narrow political considerations have impeded progress on broad non-partisan concerns and gradually undermined governance.

Serious systemic improvement in health care in Israel clearly demands the injection of massive financial as well as human resources (Israel’s outlays on medical services are among the lowest in the industrialized world and have been further slashed in 2019). Money allotted to this objective requires a revamping of national priorities. First and foremost, it necessitates a reallocation of funds from the defense budget to civilian needs. Prime Minister Netanyahu, who is not only Minister of Health, but now also Minister of Defense (alongside holding the Foreign Affairs portfolio), is disinclined to initiate such a move. In its stead, he supports — at least in theory — seeking other sources of funding. But he is not willing to increase taxation for health purposes, as this will adversely affect the cost of living. Privatization may be a partial solution, but it further exacerbates social inequalities — a very iffy proposition in light of the low socioeconomic status of the present coalition’s electoral base. It is thus unlikely that much will be done in the near future to rehabilitate what is fast becoming a veritable catastrophe in the health sphere — indicative of growing distress in social services in general.

The political price of required action has thus hindered the government’s ability to design policy and to ensure its implementation. In this domain — as well as others — the much-bemoaned problems of governance have nothing to do with restraints imposed by the courts, the media or domestic critics and everything to do with political choices. The failure of governance in health care contributes to its further deterioration. And this pervasive structural sickness cannot but exacerbate problems of governability (and hence legitimacy) down the road. A bit more courage, responsiveness and decisiveness by leaders committed to promoting the public interest can still alter the course for the entirety of the country’s citizens.