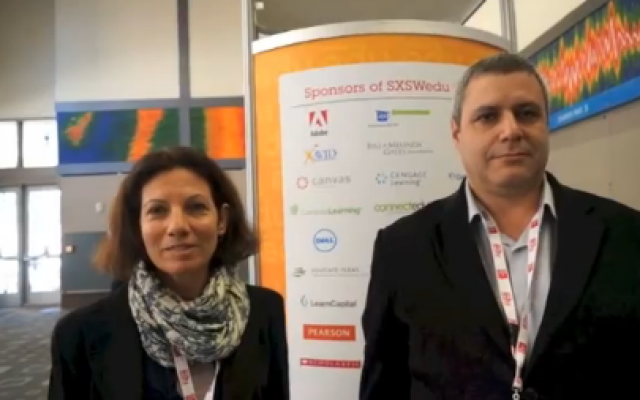 While so much of the focus of SXSW is centered on the Interactive, Music, and Film portion, there’s also an educational component to the festival that runs March 3 – 6. Known as SXSWedu, Israel’s presence was there with the team from the MindCet Ed-Tech Innovation Center.

Meet Avi Warshavsky, CEO and Amalia Bryl, Head of the MindCET Accelerator Program. The idea behind the center is aimed at bringing together a mix of entrepreneurs, educators and researchers to create new approaches to educational technology for the world. It’s the research component that struck me as being something very unique, and something you don’t normally hear about in the context of the accelerator model.

During SXSWedu, Israeli education-startups including CodeMonkey, RoadStory and Simplisico were on hand to not only demo, but illustrate how MindCET is helping to reduce the gap between the impact of technology in and out of the school environment by identifying the pedagogic implications of technology and developing ways in which technology can significantly change teaching and learning processes.

In 2012, the Organization for Economic Cooperation and Development (OECD), ranked Israel as the second most educated country in the world.

Given its global leadership role in startups and innovation, it will be interesting to watch how incubation and education come into the mix that makes Israel so unique and so very special.

Approaches to education and startups, combined with a focus on deep research, makes the MindCet Ed-Tech Innovation Center a model to watch as it helps to contribute to the educational world at large.