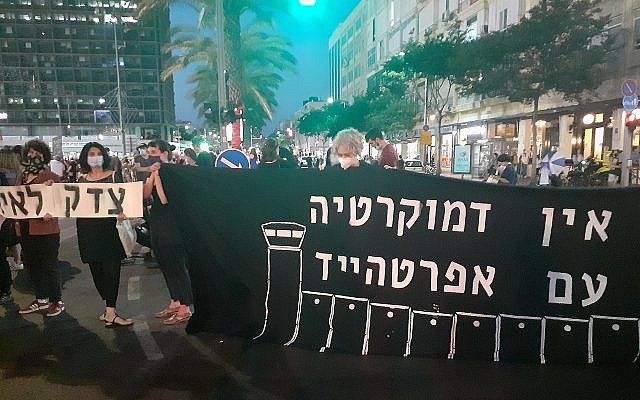 "No democracy with apartheid" sign at an anti-annexation demonstration in Rabin Square, Tel Aviv, on June 6, 2020 (credit: Wikimedia Commons).

Overconfidence is the ultimate weakness of the strong. We can see it in every arena: interpersonal relations, sports, politics, wars, and so on. People who are overconfident are not as cautious, they make unnecessary mistakes that their more careful selves would never have made, and so they sometimes lose when they were widely expected to win.

Jews have so far in their 3000+ years of history been spared this weakness. Why? Because they have never been strong enough to feel overconfident. But now that Israel is a powerful state feared by its neighbors, overconfidence is creeping in for Jews, at least for Israeli Jews. For American Jews, no so much, which is maybe why, on the whole, they are seeing the issue of annexation of the West Bank very differently from the way Israeli Jews are seeing it.

Most American Jews believe that caution should be the top priority. Israel should not unilaterally annex land that it does not absolutely need to annex because it creates new threats on the Jewish state: increased tensions with neighbors, demographic problems, a re-energized anti-Israel movement, more Palestinian extremism, fewer options for settling the conflict, etc.

For a large number of Israeli Jews (maybe most), there appears to be no need to worry about a few new risks. They know that Israel won every conflict with the Arabs so far despite even bigger risks, and they do not foresee that changing. So they are willing to throw caution to the wind and to annex land just because they can. That is overconfidence.

Israel’s most dangerous enemy may not be Hamas, Hezbollah, or even Iran. It may be Israel’s own overconfidence.