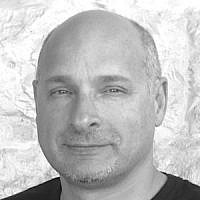 The Blogs
David Talmor
Apply for a Blog
Advertisement
Please note that the posts on The Blogs are contributed by third parties. The opinions, facts and any media content in them are presented solely by the authors, and neither The Times of Israel nor its partners assume any responsibility for them. Please contact us in case of abuse. In case of abuse,
Report this post.

Rebbe Noach is the Ultimate Protector.  No matter what a Jew’s approach to Judaism, level of observance, or attitudes and opinions, each Jew calls on Rebbe Noach (whether or not they have actually ever heard of Rebbe Noach) to receive the opinion that their approach is right, that those opinions and approaches are the ones desired by the Holy One.  And every time a Jew inquires of Rebbe Noach as to whether the thought or action is the “right” one, Rebbe Noach is always there to say “yes”.  Rebbe Noach represents a world of black and white, right and wrong, as described so vividly in this week’s parashat hashavua of Re’eh.  Rebbe Noach serves the most basic need for defense, for survival, for protection, for order, for belonging in a world in which it is not always easy for people to find their place.  The position of Chief Rabbi never existed until the British created it, but Rebbe Noach needed no such interference – people who call on Rebbe Noach do so out of the real human need to fit into the world as they understand it.

Rebbe Shichrur is the Ultimate Liberator.  No matter what a Jew’s approach to Judaism, level of observance, or attitudes and opinions, each Jew calls on Rebbe Shichrur (whether or not they have actually ever heard of Rebbe Shichrur) to advocate his or her growth and development as a human.  Rebbe Shichrur allows a person to set aside every rule they’ve ever known in order flourish as a person – to love more strongly and more deeply, to want and to dare, to express their vision of what the world could be like.  Rebbe Shichrur represents impulse and struggle as expressed in “Yisrael/Ki Sarita” and “Ivri”.  To go beyond the limitations of our own character, of the constrictions of the world around us, and of the “muvan me-alavs” that run our lives we call on Rebbe Shichrur, and he is always there to say “yes”.  Rebbe Shichrur serves the most basic need for growth, for flow, for hope, for nourishment, for building a world that it makes sense to live in.

Rebbe Noach and Rebbe Shichrur are not a division of the Jewish people like Sephardi and Ashkenazi but rather a unity that together are this wondrous thing called the Jewish people.  Rebbe Noach and Rebbe Shichrur together are truly the chief rabbis of Israel who should be recognized, respected, and loved even though they will never go through an election such as we’ve recently witnessed.

About the Author
David Talmor works with released prisoners as they plan and build their own businesses.
Comments