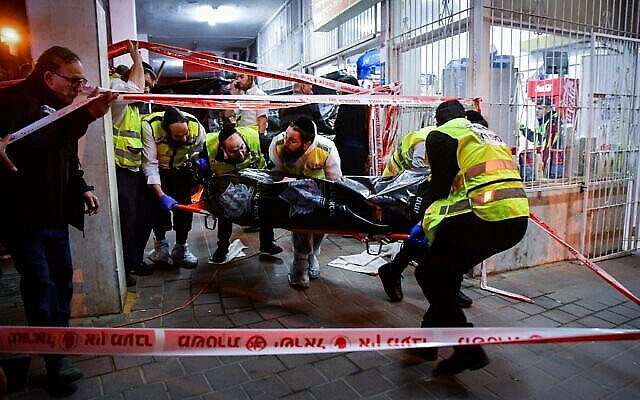 Members of the Zaka emergency organization remove a body from the scene of a shooting attack in Bnei Brak, March 29, 2022. (Avshalom Sassoni/Flash90)

Anytime Israel endures a spate of terrorist attacks the country seems to digress into a sad, visceral ritual. The latest manifestation has just played out in response to the three deadly attacks that killed 11 people within a week.

The details and context of any round of violence may change, but the national psyche seems to stay the same and invariably includes the following elements: massive media coverage that triggers widescale panic, so-called experts calling for swift military action against West Bank Palestinians, and the regular cast of nationalist zealots literally dancing on blood on the streets and disrupting TV broadcasts with their bigotry – while never proposing any specific, practical, feasible solutions.

So, let’s break down the fallacy of each element of this cynical ceremony and examine just how out of whack these emotional reactions are with reality.

Oh no, here we go again

As a war-torn nation, scarred by decades of terrorism, Israel in many ways still suffers from a form of post-traumatic stress disorder. Shootings and stabbings in major Israeli cities naturally elicit troubling associations and fear of a return to the past.

But anyone comparing the recent wave to what transpired in the mid-1990s, early 2000s or even as recently as last year’s vigilante street fighting during the war in Gaza is either prone to hysteria or has a very poor memory. It’s one thing to be more aware of your surroundings these days. It’s quite another to keep kids home from school and see an enemy at every corner.

If anything, the slow reaction in neutralizing the stabber in Beersheba, who managed to kill four before he was finally shot dead, could be emblematic of how easily Israel has gotten used to the “good times.” The shocked response seemed to indicate just how out of practice Israelis have become with such attacks.

It may not be a popular sentiment, but sporadic terrorism is part of life in the Middle East and a few attacks, however tragic, are no reason to panic.

We need another “Defensive Shield”

No, we most certainly don’t. That massive operation, the largest in the West Bank since the Six-Day War in 1967, was aimed at rooting out well-established terrorist cells after a brutal wave of suicide bombings that made daily life in Israel unbearable.

As noted, that’s not where Israel is at. Furthermore, since no one seems to be directing these recent seemingly unconnected attacks, there is no one to really go after. The first two, in Beersheba and Hadera, were carried out by Arab citizens of Israel believed to be inspired by the Islamic State. Only the third attacker, in Bnei Brak, was from the West Bank.

Israel should indeed pursue anyone who abetted him or others planning similar attacks. But since there does not appear to be an orchestrated assault on Israel there is no need for an orchestrated counterassault, especially at a time when Israel is enjoying its heyday in normalization with the Arab world. Why risk all this progress for a vague objective?

If Israel is to launch a major offensive now, it should be a “Defensive Shield” to collect the hundreds of thousands of illegal weapons circulating among Arab criminals in Israel. That’s a campaign everyone can get behind, especially the vast majority of Israeli Arabs who themselves have suffered most from this phenomenon.

The unchecked violence of Arab gangs and the rampant weaponry in Arab society are the primary factors in shifting the narrative in Arab domestic politics and are what paved the path for Mansour Abbas’ electoral success and eventual historic inclusion in this governing coalition.

It’s unfortunate that Arab criminality only gets its proper due when those who are targeted are Jews. But this could be a key moment for the government to finally take it on.

Why even waste energy acknowledging these racist rebel-rousers? Because more than ever the context of these recent attacks offers irrefutable proof that Meir Kahane remains as wrong as ever and that his political disciples remain as despicable as ever.

Yes, the people who carried out these heinous murders were Arabs. But so were some of the victims and some of the heroic police officers who tried to stop them.

The attacks came just as the foreign ministers of Egypt, Morocco, Bahrain and the United Arab Emirates descended on Israel for an unprecedented summit in the Negev to solidify the warming ties. Those leaders all condemned the attackers, as did Palestinian President Mahmoud Abbas and local Arab politicians across the spectrum.

But it was the victims themselves who offered the greatest illustration of how far Israel has come in the integration of its Arab minority. One of the border police officers killed in Hadera was Yazan Falah, a Druze. And in Bnei Brak, it was Amir Khoury, a Christian Arab policeman engaged to a Jewish woman, who sped toward the shooter and was shot dead just before his partner ended the deadly rampage.

They, more than anything, show how Israeli society has evolved.

Rabble-rousers like Itamar Ben Gvir and Bezalel Smotrich and the “death to the Arabs” gangs will always delight in seizing on such sadness as fodder for their extremism. But the rest of the country may better appreciate the full fabric of society.

In conclusion, the best advice to follow these days may well be that which Nachman Shai recommended during the onslaught of scud missiles during the Gulf War: Drink water.

Translation: These are trying times but it’s best to take a deep breath, let the government and army do their jobs in a cool-headed fashion and carry on. This too shall pass.