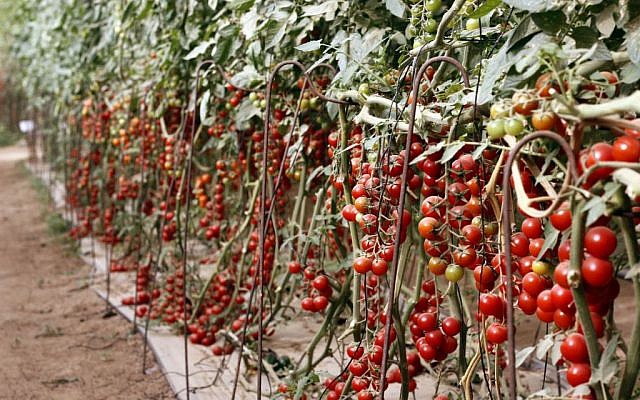 Whenever a government delegation travels to Africa or India, Israeli officials wax euphoric about the country’s agricultural research. When Prime Minister Netanyahu spoke at AIPAC in Washington this year, for example, he opened with a few words about Israeli hi-tech and military industries and quickly moved on to proud descriptions of the country’s astonishing agricultural acumen and innovation. As this year’s 70 Independence Day slogan goes: “There is what to be proud of!”.

This week, Tel Aviv is hosting the triennial Agritech Israel exhibition and conference, where Israeli researchers and agrotech companies present their new ideas and technologies for improving agriculture. What began in 1970 as a modest gathering of farm products has mushroomed into a remarkable international, technological celebration: In the most recent 2015 Agritech, 12,000 international guests joined 30,000 Israeli participants at the event.

This year some forty ministers of agriculture from every corner of the world will be arriving to take in the creative products of Israeli agricultural research. Yet, there is one thing that the esteemed international attendees will not hear during their stay: Contrary to the proud declarations of Israel’s government in general and our minister of agriculture in particular, we are witnessing a new policy that threatens to desiccate the country’s agricultural researchers and impair one of the country’s most impressive scientific and economic achievements: At a time of budgetary surplus, government funding for agricultural research is to be cut back by almost a quarter.

Israeli agricultural creativity is the result of a happy interface between an agrarian Zionist ideology, a sophisticated community of farmers and brilliant research scientists. Along with the Hebrew University’s Faculty of Agriculture and professors from Tel Aviv and Ben Gurion Universities, a slew of inventions followed from the many notable academic publications. Kibbutzim made their own applied contribution with adept factories producing agricultural products for the world, especially in the area of irrigation and water management.

The results are breathtaking: Israel can claim intellectual ownership of the delightfully sweet cherry tomato; uber-efficient drip irrigation; drought-resistant seed varieties; post-harvest treatments for produce that add weeks to the shelf life of fruits and vegetables; cows who yield more milk with more protein than anywhere in the world; the doubling of lambs born to local sheep; biotechnology that turns algae into a healthy and profitable commodity; delicious ocean fish raised in the middle of the desert; and the list goes on and on.

None of this happened by itself. It was the result of a policy based on understanding that if you want innovative agriculture, you have to invest in research.

Even after Israeli agriculture stopped providing employment for a third of the population and could grow only half of the calories required by the growing population, the government understood that Israeli agricultural research had intrinsic merits. It was the unique local scientific community that spawned the country’s 500 agrotech companies, companies that contribute significantly to feeding the planet and producing export commodities that create jobs and generate billions of shekels.

It turns out that the world needs the resourcefulness of Israeli researchers: some 100 million people died during the past decade from hunger and hunger-related diseases. Today there are about a billion people living in Africa. UN projections suggest that by the end of the century there will be 4 billion. It is not at all clear what they will eat. If we want to avert an unprecedented humanitarian disaster, we need to assist these countries. Israel, like all prosperous, developed countries, has a responsibility to help. For any number of regrettable reasons, Israel does not have a foreign aid policy or budget. But at least we have significant government investment in agricultural research which can be seen as meaningful, indirect, international aid to farmers in developing countries.

It’s therefore important, prior to the opening of the Agritech Exhibition, to decry the new policy which Agricultural Minister Uri Ariel has introduced. In all fairness, distancing from agricultural research did not start with the present minister. Thirty years ago there were 400 agricultural researchers at the government-sponsored Volcani Institute. Today there are only 200. All the same, Ariel has begun a full-fledge retreat starting with a 22% cut in the Volcani research budget for 2019.

It should be emphasized that the Ministry of Agriculture’s budget has not be reduced. Rather, Minister Ariel changed its priorities, deciding that there was really no need to keep funding agricultural research at the levels of his predecessors. Of course we won’t see the results immediately. Research funding is, by its nature, a long-term investment. But make no mistake: weakening the country’s researchers will be felt in the future when Chinese, Indian and American corporations fly past Israeli agricultural companies who can no longer compete.

It is well to ask why. Somehow or other, Minister Ariel found millions of shekels in the ministry’s budget to sponsor an “Open Day” on the Volcani campus over the Passover vacation, even though its primary benefit seems to be political. Money is directed from the budget from agriculture to myriad activities for Ariel’s core constituents and NGOs affiliated with his political party. But the scientific research that allows tiny Israel not only to be a player, but a super power in the world of agriculture, is of less interest to the Minister.

We can only hope that Uri Ariel and the other government representatives attending Agritech will listen to the very speeches praising local agricultural research that they themselves will undoubtedly be giving to their colleagues from around the world next week. There is still time to reconsider this unfortunate budgetary decision and allow Israeli scientists to continue contributing to the greatest global challenge of them all.