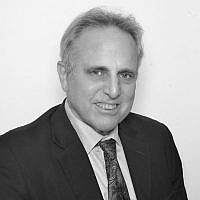 The Blogs
Steve Gutow
Apply for a Blog
Advertisement
Please note that the posts on The Blogs are contributed by third parties. The opinions, facts and any media content in them are presented solely by the authors, and neither The Times of Israel nor its partners assume any responsibility for them. Please contact us in case of abuse. In case of abuse,
Report this post.

There are supporters of Israel who have tried to delegitimize J Street ever since its founding fifteen years ago. Rabbi Strauss’ TOI blog is yet another in a long line of attempts to place J Street beyond the pale of Jewish organizational life, this time arguing that the organization has undergone a dramatic shift away from its earlier positions. In my view, J Street has been consistent in its guiding principle from day one, namely, that Israel’s security as a Jewish and democratic state is best served by a negotiated two-state outcome.

I come at this discussion from an interesting place. In 1984, I took an extended leave from my Dallas law firm and moved to Austin to set up  AIPAC’s newly formed Southwest Region. Those were some of the best years of my life. We organized in small towns and cities in six states: Texas, Arizona, New Mexico, Oklahoma, Louisiana, and Arkansas. Those were states in which two-thirds of the members of Congress voted against foreign aid and ten of twelve of the Senators supported selling AWACs aircraft to Saudi Arabia. These were AIPAC’s priority issues at the time, and we needed the votes changed. Through our efforts we reversed the votes in the six target states.

Our basic organizing principles were both to respect differences of opinion on Israel and, at the same time, to keep the Jewish community united around support for the Jewish state’s fundamental security. That entailed building support for US foreign aid and opposing the sale of sophisticated military equipment to Israel’s Arab adversaries. We believed, then, that to highlight differences was rarely a productive enterprise. I still believe that. Attacks such as the one launched by Rabbi Strauss are not only a waste of time – J Street has grown bigger and stronger over the years – they are counterproductive.

Truth is that AIPAC and J Street agree on some basics. For example, they both support $3.8 billion in annual security assistance for Israel, the legacy of the MOU signed by Israel and former President Obama. This package includes significant funding for the Iron Dome system. Thus far, AIPAC’s modus operandi is never to challenge the policies of Israel’s governments, including the current one which includes extremists in highly sensitive ministerial positions.

On the other hand, J Street has decided to take positions on issues about which most American Jews care deeply. These include Israeli government proposals to amend the Law of Return, to reject non-Orthodox conversions, to allow a simple majority of sixty-one Knesset members to overturn Supreme Court decisions that protect basic minority and individual rights, and to threaten the equal status of LGBTQ Israelis. These possibilities are frightening to many of us who will always love Israel and work for its security no matter what. Rabbi Strauss, perhaps these matters are as important (probably more) to members of your congregation than are their differences with J Street’s positions. Maybe, instead of attacking J Street, it is worth lobbying AIPAC to depart from past practice and represent the American Jewish community, not only in Washington, DC, but in Jerusalem as well.

I served as CEO of the Jewish Council of Public Affairs (JCPA) for more than ten years during which time the Israel Action Network to combat the assault on Israel’s legitimacy was founded. We coordinated the efforts of all the major national public affairs organizations and over one hundred JCRCs. Our core belief was that by bringing the varied segments of our community together in civil discourse we were more effective in advancing shared policy objectives, that the whole is greater than its individual parts.

There’s a lesson to be learned. Whether as an activist in AIPAC or J Street, let’s keep our collective eyes on the prize: a secure and democratic Israel at peace with the Palestinians and its other Arab neighbors.

About the Author
Rabbi Steve Gutow just completed a six-year position as a visiting scholar at the Robert F. Wagner Graduate School of Public Service. He received rabbinic ordination from the Reconstructionist Rabbinical College in 2003. Gutow served as president and CEO of the Jewish Council of Public Affairs (JCPA) from 2005 until 2015 in which one of his principal tasks was to defend Israel in the political system of the United States. In 2015, Gutow was appointed to the President’s Council on Faith-Based and Neighborhood Partnerships and was accepted as a New York member of the Council on Foreign Relations. Gutow was recognized by Newsweek as one of the nation’s most influential rabbis in 2009, 2010 and 2012. He has also been recognized as one of the nation’s top Jewish leaders by The Forward.
Related Topics
Related Posts
Steve Gutow