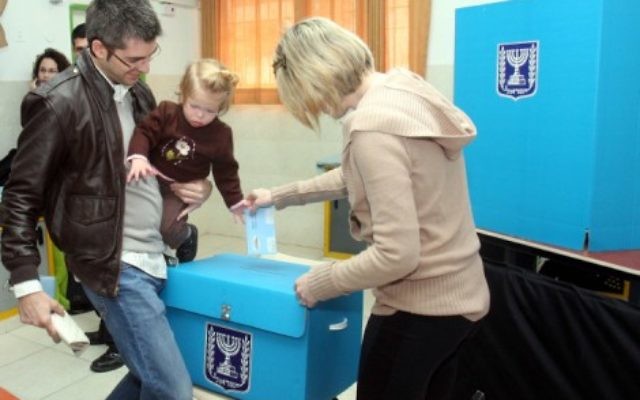 Illustrative. An Israeli family cast their ballots at a polling station in 2009 (Flash90)

On March 2, Israelis will head back to the polls for a third time in 12 months. This previously unimaginable situation has left many asking: what – if anything – will be different this time around? Will the newly publicized Trump peace plan prove to be a boon for Benjamin Netanyahu and help his Likud party succeed in forming a government after having failed to do so following the past two elections? Will Netanyahu’s official indictment, presented to the Jerusalem District Court on the same day on which Trump’s plan was published, convince voters that it is time to move on and put their trust in Benny Gantz and his Blue and White party? In the end, the answer might depend on who shows up at the polling place.

As we enter this last phase of the election, from now until Election Day, most people are focused on is who sets the agenda. Gantz and his Blue and White Party want the electorate to focus on Netanyahu’s legal troubles and on the prospect of a sitting prime minister attending his trial in Jerusalem’s District Court in the morning, and then heading to his office to convene the cabinet in the evening. They know that Israelis, almost completely across the political spectrum are uneasy about the prospect of business as usual, as Netanyahu’s legal predicament worsens.

For the Likud, the plan is to focus on their strengths – the relative security and stability Israelis have enjoyed during the last 10 years that Netanyahu has served in office and his perceived ability steer the ship of state through turbulent regional and international waters. This is why Trump’s peace plan and the possibility of annexation (or, extending Israeli sovereignty) over parts of the West Bank, is back in the headlines. While the so-called “deal of the century” may threaten to upset the more extreme elements of the right-wing base, since it implies some possible Israeli concessions, the very fact that the Israeli voter could focus on Netanyahu the statesman as opposed to Netanyahu the defendant, is a net gain for the Likud.

The real focus of the campaigns, however, is on voter turnout. Or, more specifically, turning out their own voters.

For the parties, where turnout will be strong is even more important than general turnout. As in the United States, geographic location can tell you a lot about people’s voting. Cities and towns, whose residents enjoy higher socioeconomic status, have consistently voted for parties belonging to the center-left bloc. Conversely, Israelis living in “development towns” and lower-to-middle class cites, such as the northern town Karmiel or Tel Aviv suburb of Bat Yam almost always vote for the Likud or one of its satellite parties. If we take Karmiel as a case study, we can see why the Likud’s representation in the Knesset dropped. While 37% of those who voted in the April election chose Likud, in September this went down to 31%. At the same time, Blue and White’s share of the vote stayed steady at 26%. The real change can be seen in the numbers supporting Liberman’s Yisrael Beytenu party, which rose from 16% to almost 24%. It is important to note that this shift occurred despite Liberman having already made clear that he no longer necessarily sees himself as solely as a member of the center-right bloc.

A mirror image of this phenomenon can be found in upper middle-class cities such as Givatayim, Kfar Saba or Ra’anana. In these cities, Blue and White was able to keep its share of the votes, garnering between 40% and 50% in both national elections. More importantly, voter turnout remained steady– or even rose– from April to September. In the Likud strongholds, on the other hand, turnout dropped between the two rounds by 0.4%, and in some cities such as Karmiel, it sank as much as 1.3%.

This is exactly the trend that Netanyahu hopes to reverse now in March. He is counting on his base coming out to vote this time. Netanyahu is assuming that while an estimated 300,000 potential voters stayed home in September, now — when they see that the Likud-led government is in danger, and perhaps empathize with his sense that he is being victimized by the so-called elites, the base will come out in droves. Gantz, of course, hopes for the opposite, and is betting that his base will be fired up by Netanyahu’s indictment and the prospect of defeating him for the first time in over a decade.

It is impossible to predict how Israelis will react to this third election and if they will show up at the polls. IDI’s latest survey indicates that the public is not following this campaign as closely as in the previous round. Still, it is important to remember that in September, the pundits were surprised by the amount of faith shown in our democratic system, with voter participation actually increasing to 70% from 68% in April’s election.

Rational thinking would seem to indicate that March’s election will be the last one of this zany cycle. With no 2020 budget in place, Israel is now operating on 1/12th of the 2019 budget. All reforms and government plans are essentially frozen. And while the security services continue to do their utmost to keep the country safe, Iran is more belligerent than ever, the region is transforming at a dizzying pace, and now the American administration is adding its peace plan to the mix. This should spur our elected officials to seek the quickest route to governmental stability.

Nevertheless, if the events of the past year have taught us anything, it is that Israel’s democratic system is more broken than we previously imagined. While the civil service remains dedicated, and key institutions such as the judicial system are standing strong under immense pressure, the underlying foundations of our democracy are being eroded.

The electoral system is not producing a government and is in dire need of reform; key segments of the Arab and ultra-Orthodox communities are feeling alienated, while many in the political center are concerned that religious extremists have an increasingly outsized voice in determining the character of the state. In short, it is becoming more apparent with each passing day how fragile the constitutional framework of our democracy truly is.

We can only hope that after March 2nd, whatever the result, political leaders across the spectrum will put their short-term personal interests aside and not only form a government, but actually get to work to implement desperately needed reforms to safeguard the future of Israel’s democracy.