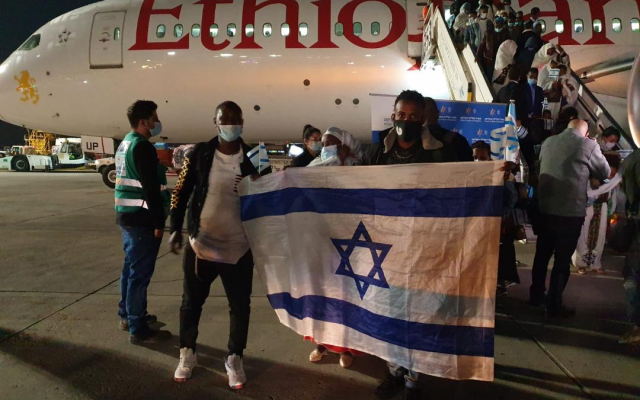 Under MK Pnina Tamano-Shata's leadership, Israel was able to keep its promise to transport 2,000 new olim from war-torn Ethiopia. But it needs to finish the job. Family members of those resettled are still at risk. (Kassaw Molla)

The new Bennett-Lapid coalition is a reminder that Jews carry the best potential for success when they work together.  It’s a valuable lesson for all, but especially for Israel’s western allies, where it is common to think that the only way to win voters is to discredit one’s opponent and disparage their values. It’s no surprise that antisemitism and racism are now daily topics of reporting in the US and Canada. We have yet to realize, as Israelis are striving to do, that by recognizing the principles, customs and strengths of others, ours too, are made relevant.

But perhaps one of the smartest steps this new coalition has taken was to give credit where credit was due. As a member of the Blue and White party (which was part of the most recent government), MK Pnina Tamano-Shata was a natural fit for the role of minister of aliyah and absorption when Benny Gantz became joint prime minister in 2020. Her immigration to Israel during the perilous 1984 Operation Moses airlift gave her a unique understanding of what immigrants from at-risk communities experience when applying for aliyah, and in particular, the urgent needs of Ethiopian Jews. Appointing her in this position has saved thousands of lives. It has also served as an excellent reminder to the rest of the world that even in the midst of a pandemic we are still capable of saving and transforming lives when we truly want to.

Her quiet but successful effort to secure a temporary visa for one young Ethiopian boy who needed to travel to Israel for heart surgery did more than fulfill pikuach nefesh. It elevated a global discussion about Israeli nonprofits and hospitals that work together regularly to save children’s lives in Africa. Social media was tweeting and broadcasting the story of Binyamin Tesfahun’s surgery in Israel for weeks.

So Tamano-Shata’s continued appointment as minister of aliyah and absorption is welcome news, especially since conditions in the region of Tigray, Ethiopia are continuing to worsen. The city of Gondar, which is west of the war-torn region of Tigray, is home to thousands of members of the Ethiopian Jewish community. The majority are related to Ethiopian Israelis who gained aliyah years before. Ensuring the safety of these remaining men, women and children should be among Israel’s most urgent priorities.

Israel’s new government has many challenges ahead, but it has for the first time in decades, a coalition of strengths and experience that reaches across ideological lines and has the potential to unite not just Israelis, but Diaspora Jews as well. Forging a working, cohesive coalition of strengths is vital to mending an equally fractured Diaspora. But it also sends an important message to those who disparage Israel and are trying to foment antisemitism: Tolerance toward those who are different from you, and willingness to work in unity with cultures and ideologies that aren’t your own, can bring success. It’s up to Israelis and Jews across the globe to reinforce that message, not just in the streets of Israel, but in those of the Diaspora, as well.