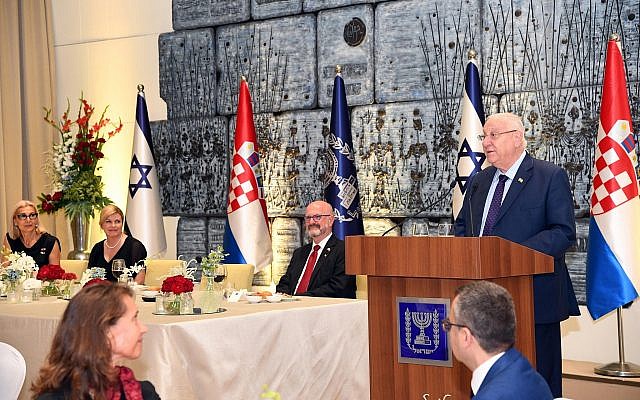 The recent visit to Israel by Croatian President Kolinda Grabar-Kitarović has once again focused attention on one of the more difficult dilemmas facing Israeli foreign policy. How should Jerusalem treat countries which are increasingly friendly to the Jewish state, want to strengthen bilateral relations, and occasionally even vote against, or at least abstain on anti-Israel resolutions in international forums, but have a bloody Holocaust past, which they have failed to confront honestly, and as a result, a badly strained relation with their own Jewish community?

Normally, when dealing with such questions, we seek historical precedents, but this situation is, to the best of my knowledge, totally unprecedented in Jewish history. Never have we had to deal with countries which greatly admire Israel and are anxious to become our close allies and benefit from our advances in a wide range of fields  from agriculture and defense to cyber security, but retain a deeply-seated animus toward local Jews and refuse to honestly and effectively distance themselves from their fascist past and Holocaust crimes.

In this regard, Croatia has become a classic example of such a country and President Grabar-Kitarović a political leader who exemplifies the problem. During World War II, Croatia was a satellite state, created by Nazi Germany and Italy, which was ruled by the Ustasha, a fascist movement established in the 1920s, and which was notoriously anti-Serb, anti-Semitic, and anti-Roma. The area of what was called the Independent State of Croatia [NDH in Croatian] consisted of what is today Croatia, Bosnia-Herzegovina, and a small part of Serbia. It included hundreds of thousands of Serbs, 40,000 Jews, and several thousand Roma.

Immediately following the establishment of the NDH, it began to persecute and murder the members of these minorities, in camps like Jasenovać, the largest one set up by the Ustasha, where approximately 100,000 innocent victims were murdered. In all, hundreds of thousands of Serbs were killed by the Ustasha, as well as 20,000 Jews and several thousand Roma. In addition, 10,000 Jews were deported from there to be murdered in Auschwitz. All of these crimes were committed by Ustasha, without active Nazi participation.

Needless to say, this was hardly a pleasant legacy to inherit when the country became independent, but the father of Croatian independence, President Franjo Tudjman, actually embraced it, daring to deny the Holocaust and accuse Jews of running Jasenovać, despite the fact that he had fought with Tito’s partisans against the Ustasha. His provocative comment that “he was proud that his wife was neither a Serb nor a Jew” only added flame to the fire.

Subsequent leaders, like his successor President Stjepan Mesić, apologized unequivocally for the crimes of the Ustasha, but a large segment of Croatian society, most probably a majority, remain staunchly ultranationalist. Even the trial, conviction, and punishment of Dinko Šakić, one of the commanders of Jasenovać, who was extradited from Argentina to stand trial in Zagreb, and which initially had a positive impact in Croatia, could not squash the widespread nostalgia for the Ustasha, which continues to this day.

The problem in this regard exists on two levels — the political leadership and the educational system. The latter has not found a way to convincingly educate the younger generations about the horrific crimes committed by the Ustasha and the dangers of the racism, fascism, anti-Semitism, and xenophobia they espoused, while leaders like Grabar-Kitarovic send confusing messages of where they stand on these issues. On the one hand, she has denounced Ustasha crimes on several occasions, but, like many Eastern European leaders, she never forgets to, on the same occasion, denounce Communist crimes as well. She thereby promotes the canard of equivalency between the two totalitarian regimes, one of the major principles of contemporary Holocaust distortion.

And then there were more blatant examples of her ambivalence about her country’s sordid past. Thus, for example, in 2016, she was photographed in Canada together with Croatian emigres proudly showing an Ustasha flag, and in 2018, on a visit to Argentina, she praised those Croats who emigrated from Yugoslavia to South America to find freedom, when among these emigrants were major and quite notorious Ustasha mass murderers, such as NDH head of state Ante Pavelić, Dinko Šakić, and many others. And finally, she related in a radio interview several years ago that her favorite singer was Marko Perković (nicknamed “Thompson”), some of whose songs glorify Ustasha massacres and incite to violence against Serbs.

Despite all these incidents, she was invited to Israel and treated royally, with nary a harsh word or comment made by President Rivlin. Prime Minister Netanyahu, or Foreign Minister Katz, with the latter even praising her for her efforts to combat anti-Semitism, a compliment regularly made about Eastern European leaders who do nothing of the sort. So instead of some innovative Israeli approach to this unprecedented set of historical circumstances, what has happened so far is a shameful response by our government that is an affront to the victims of the Nazi collaborators of these countries, not to mention those of us alive and living here because of a desire to reside in a country whose priorities and responses are reasonably influenced by Jewish interests and history.