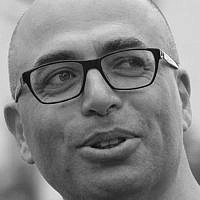 The Blogs
Eyal Hareuveni
Apply for a Blog
Please note that the posts on The Blogs are contributed by third parties. The opinions, facts and any media content in them are presented solely by the authors, and neither The Times of Israel nor its partners assume any responsibility for them. Please contact us in case of abuse. In case of abuse,
Report this post.

On Jerusalem Day, Israelis are bombarded with clichés about the “unification” and “liberation” of the city. There is no better time to examine Israeli policy in what is actually a divided city. There is no better place to look than the Palestinian neighborhood of Issawiya. Fifty-three years after Israel illegally annexed East Jerusalem, this neighborhood is now one of the poorest and most overcrowded in the city.

For more than a year now, the Israel Police has been waging a campaign of abuse and collective punishment against the 22,000 residents of the neighborhood. Armed from head to toe, Special Patrol Unit and Border Police forces enter Issawiya for absolutely no reason almost every day. They intentionally create violent “friction” by firing stun grenades, tear gas and sponge rounds, and beat and arrest residents. Last June, a police officer killed 21-year-old Mohammed Obeid with no justification; to add insult to injury, the police then clamped down on commemorative efforts, breaking monuments erected in Obeid’s memory and painting over his portraits on neighborhood walls.

In February, eight-year-old Malik Eissa lost his left eye after being hit in the head by a sponge round that a Border Police officer shot from about 15 meters away. About 850 residents, most of them minors, have been arrested and 300 injured. The brutal police campaign is continuing despite medical guidelines on social distancing, raising the risk of coronavirus infection in the neighborhood. Unsurprisingly, the police cite security concerns as justification. Yet close monitoring proves time and again that Issawiya remains calm – that is, until the police chooses to torment the residents.

The abuse of Issawiya residents by Israeli authorities extends far beyond the police campaign. If Israelis think the authorities work for the good of the entire public, they should think again. No less than 90% of the Palestinian neighborhood’s land has been expropriated, seized by military order, or declared state land, always in the name of “the public interest.” Somehow, that interest is always erecting a new Jewish neighborhood or Israeli institution. The neighborhood is now hemmed in by the Hebrew University, the Hadassah Mount Scopus Medical Center, the Jewish neighborhoods of French Hill and Tzameret Habira, military and police bases, and Highway No. 1. As though that weren’t enough, the settlement of Ma’ale Adumim, the Jerusalem municipality and even the Israel Nature and Parks Authority have all directly benefited from the land grab. The interests of Issawiya’s residents never factored in the equation. For Israel, Palestinians are never part of the “public.” If you wonder why East Jerusalem’s residents are poor, start with the dispossession of their land.

Denying residents the opportunity to benefit from their own land is compounded by a policy of no urban planning in the neighborhood, a key reason for its overcrowding. The reason more than half the homes in Issawiya – about 2,000 units – were built without a permit, is not the Israeli truism that Palestinians in East Jerusalem are serial lawbreakers. Rather, the authorities’ deliberate no-planning policy means that even if residents dearly wish to build legally, they simply cannot. Fifty-three years after Issawiya was annexed to the municipal boundaries of Jerusalem, the city has yet to draw up a proper outline plan that allows for building permits to be issued, or for future development to meet the neighborhood’s needs. Left with no other choice, residents build, risking demolition of their homes and being fined exorbitantly.

Issawiya is an extreme example. But its abusive treatment by Israel is no aberration. Israel wants a Jerusalem that is “united” in fantasy, but racist in reality. It wants the land, but not the Palestinians living on it. For a regime geared towards preserving Jewish demographic supremacy in the city, the Palestinians are redundant. They must be kept subdued, oppressed, poor and in constant fear. Maybe, the policymakers hope, these residents will someday give up and leave the city. Until then – let them suffer.

About the Author
Eyal Hareuveni is a researcher with B'Tselem and the author of the report This is Jerusalem: Violence and Dispossession in Issawiya
Comments