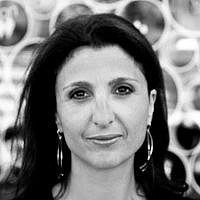 The Blogs
Fleur Hassan-Nahoum
Apply for a Blog
Advertisement
Please note that the posts on The Blogs are contributed by third parties. The opinions, facts and any media content in them are presented solely by the authors, and neither The Times of Israel nor its partners assume any responsibility for them. Please contact us in case of abuse. In case of abuse,
Report this post.

A march that started as a happy and hopeful celebration of freedom and diversity suddenly descended into mayhem and panic. At the very moment that it happened I was taking a picture of four men I had noticed wearing kippot in the colors of the pride rainbow flag. When I saw them I thought to myself, what a wonderful expression of freedom and diversity, proud gay and religious men. But in fact the whole makeup of the march resembled the colors of the pride flag. There were of course young and old gay and transgender men and women, and then there were hundreds of people like me, religious, straight, entire families, children with balloons, babies , pregnant women, many men in kippot many women in long skirts. There were also some well-known figures; I saw MK Nachman Shai and Hebrew University political science legend Professor Amos de Shalit. We were there to show the world, but mostly ourselves, that Jerusalem is a pluralistic city and home to all. We were there to express that despite the chorus of bigoted and extreme voices we sometimes hear, we are not giving up on our city as a city belonging to all its residents regardless of religious and sexual persuasion, gender, race, color, or political belief system. We were hopeful, we were happy, we were dancing, we were chanting and we were having innocent fun.

In a dreadful instant our hopes and innocence were brutally violated. It came like a dark clap of thunder in the middle of a sunny day. I was 7 meters in front of the attack and it could have been me.

Now politicians are decrying this dreadful act, the Prime Minster and the Education Minister and the Mayor are promising change to the LGBTQ community. However, every year, the Open House in Jerusalem, a beautiful community center for the LGBTQ community, has to fight for funding from the city. The Open House acts as a haven of tolerance and support for young LGBTQ people, sometimes the only place they can feel like they can be themselves and find the sanctuary of feeling normal. Every year extreme voices in the Jerusalem City Council threaten, stall and drag their feet in transferring the funds that are rightfully budgeted to them and are theirs. It’s a tedious battle they have to fight every year.

Jerusalem is a diverse city, in any public space you see Jews and Arabs of every persuasion; modern orthodox, ultraorthodox, secular, but the last bastion of discrimination in this city is discrimination against the LGBTQ community. In Jerusalem as everyone else walks and dresses according to their beliefs and conscience, hold hands down the street and kiss whoever they wish, gay couples find it extremely uncomfortable. At best they get looks of disgust, and most of the time they are victims of homophobic slurs by hostile strangers.

I am glad the politicians are waking up, it’s about time they did because the status quo is intolerable. I pray for the speedy recovery of that young woman, and the other innocent people, who were injured, our hearts are with them and their families. I pray that the politicians do not just use this sad event as a platform for cynical slogans to deal with the public outrage, but that they actually follow through and ensure that the LGBTQ community are respected and protected, because if they go, we are next.

About the Author
Fleur Hassan-Nahoum is a Jerusalem City Council member and no 2 of Mayoral candidate Minister Zeev Elkin. She is also a communications consultant working with a wide variety of organisations in Israel and around the world craft and delivery impactful messages and presentations
Related Topics
Related Posts
Comments