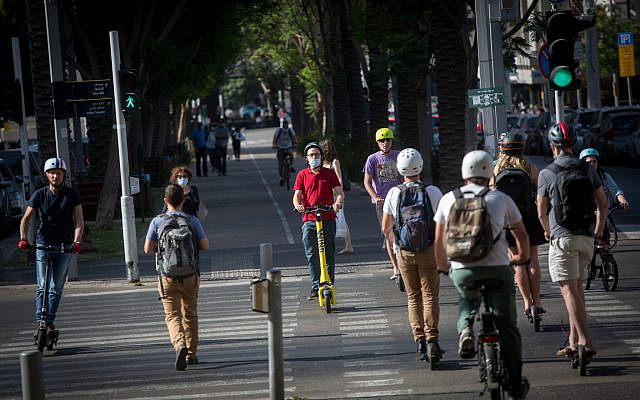 Year after year, even in the most trying of times, Israelis consistently score exceedingly high on comparative happiness indices. Yet anyone who participates in the most casual of conversations during the many face-to-face gatherings that are now taking place for the first time since the outbreak of the COVID pandemic — punctuated by a series of holidays, fasts and memorial days — cannot but be struck by the unusual amount of dissatisfaction with the small as well as the big travails of daily life. How is it possible that if things are so good, they seem so difficult? If they are so uplifting, why are they apparently so hard? And for what reasons, on the collective level, are these sentiments magnified exponentially? Why has caring for one’s own suppressed the most minimal empathy for the concerns of others and their problems?

Israelis, like many of their counterparts elsewhere, have in the past few decades adopted a confrontational mentality that pits ” me vs. you” on the personal level and “us vs. them” on the societal one. This mindset — spurred by neoliberal economic policies, mounting security-related trepidations, and growing inter-communal enmities — has been fueled by increasingly insecure politicians hoping to capitalize on heightened uncertainty.

This destructive mindset, however, is far from inevitable. A constructive counterpart does exist (albeit less overtly): one based on a more hopeful “me and you” worldview that advocates an “us and them” approach to tackling a growing list of challenges in a rapidly changing world. For this to happen, it is necessary to instill hope where disillusion has become commonplace, to inject optimism where pessimism is widespread. And that requires leaders capable of looking beyond the next vote in the Knesset or still another round of elections — and citizens willing to give then the power to do so.

Most Israelis today — except those in the highest income brackets and their cronies — are finding it more difficult to cope with the trials and tribulations of managing on a daily basis. Discussions about the rising cost of living infiltrate almost every conversation. These are especially vociferous among young people deciding on their way and only now entering the workforce. Talk to them: with all their talent and energy, however hard they try, they simply cannot pay rent, cover basic expenses, and meet the costs of the education that could give them a horizon for the future. Many are moving back in with their parents to somehow make ends meet. Others are lured into a hi-tech world — mostly minding social networks and gaming platforms for the money, suppressing dreams of improving their surroundings until they can afford to do so. Those starting as teachers, social workers, childcare providers, and community workers work harder, barely bringing in subsistence wages.

Young couples a few years older are saddled with more expenses, but don’t necessarily boast greater means. Most people in their 30s and 40s are overworked and exhausted. They worry about their circumstances and see their prospects dimming — unlike those of their parents. For lower income groups, the line between minimum income and outright poverty has become blurred, as prices of basic commodities have soared and access to medical and social services curtailed.

Accompanying anxieties spill over into the common domain. Public transportation is uncomfortable and overcrowded, prompting extra pushing and shoving by stressed people bent on getting where they want to go, even if it means trampling others. Driving has become a veritable hazard not only because of the congestion, but also as a result of raw nerves and proliferating road rage. Throughout, escalating violence in public spaces has generated a sense of personal insecurity.

The message that comes through is that everything, even a visit to the bank or the post office, communicating with the electricity company or getting answers to simple questions about social security benefits, has become an uphill battle. Life is an ongoing struggle in which your success becomes paramount, even at the expense of your neighbor, your friend or your coworker. With perpetual contestation the dominant norm, an overriding despondency has cast a pall on large segments of the population.

Remedies for these persistent hardships have been far from forthcoming. Incentives to enter remunerative fields are constantly touted, but these do not answer the needs of the dwindling middle classes. Tax breaks for lower income groups do not begin to cover the soaring cost of living. And publicly-sponsored campaigns for the needy to which many Israelis contribute generously only serve to entrench inequalities and to nurture a growing underclass.

Those without money therefore have come to rely on its manipulative substitutes: power and connections. The former took on sectoral forms during the Netanyahu era, funneling funds and benefits to particular groups in return for electoral loyalty. Under the current government, sworn to do away with such organized favoritism, recent efforts to roll back regulation or offer universal rewards to all have actually exacerbated endemic inequities and further fueled the “me first” mindset — leaving those outside the power nexus scrambling to find someone who knowns someone who can shorten the wait for a specialist, a needed test, an operation, or a passport renewal.

Noticeably missing is what is needed most: overall policies that can narrow gaps and make a real difference. Raising the minimum wage across the board is one. Assuring reasonable housing prices another. Opening slots for qualified and currently unemployed medical practitioners or substantially revising wages in social service professions yet another. These steps, however, rely on what is not necessarily politically profitable in the short term: a dedication to a cooperative approach that places the common interest above partisan considerations.

The pattern evident on a personal basis has been affected and reinforced on the more salient and better known macro level. Successive governments have found it particularly worthwhile to sow discord to prop up their power. For over a decade, Likud-led governments (like many of their predecessors) favored Jews over Arabs, the religious over the secular, settlers over urban dwellers inside the Green Line, citizens over refugees and asylum-seekers, the ideological right over the liberal center and the ideological left. The much broader Bennett-Lapid government has tried to break this mode. But its stability has been assailed, as each of its diverse components is attempting to shore up its own base to the detriment of other groups. The result has been to embed the idea that purposeful separation fortifies the capacity for political domination.

This principle has also guided policies toward the West Bank and the Gaza Strip in diverse ways since 1967. The physical separation of these areas (excluding East Jerusalem and the Golan Heights) has in reality extended Israeli control over Palestinian lands and people through the expansion of Jewish settlement and the imposition of separate legal systems for Palestinians and Israelis in the territories. This approach has contributed directly to a cycle of growing Palestinian despondency, greater use of force, the expansion of militant extremism, and the consequent intensification of the conflict. There is little debate about the nature of the cycle; the differences between the sides center on who started they cycle and why it continues its deteriorating course. Here too, as on the domestic front, the confrontational approach has done little to raise hopes or to alter growing asymmetries. Yet it contributes systematically to a worrisome mixture of heightened authoritarianism along with spreading anarchy — the concrete alternatives to vibrant democratic governance.

The way to deal with these patterns is to transform the dominant mindset, to shift to an “us and them” framework. The fragile patchwork that barely sustains the country and the areas under its rule — just as on the individual level — may unravel if not replaced by a tighter grid of crosscutting connections that can be woven into a firmer fabric which reflects the intertwining of the many people and communities that inhabit the land. This approach is being implemented in a growing number of initiatives designed to promote greater equality, equity, reciprocal rights and mutual respect.

The absence of concrete incentives to those preoccupied with their political survival should not constitute an impassable barrier for those who seek alternatives to their present plight. That, however, will continue to depend on all those in search of a better and more durable life and are willing to do something about it — each is his, her and their own way.