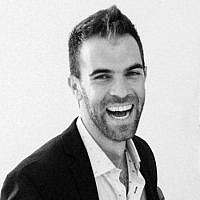 The Blogs
Daniel Y. Goldberg
Apply for a Blog
Advertisement
Please note that the posts on The Blogs are contributed by third parties. The opinions, facts and any media content in them are presented solely by the authors, and neither The Times of Israel nor its partners assume any responsibility for them. Please contact us in case of abuse. In case of abuse,
Report this post. 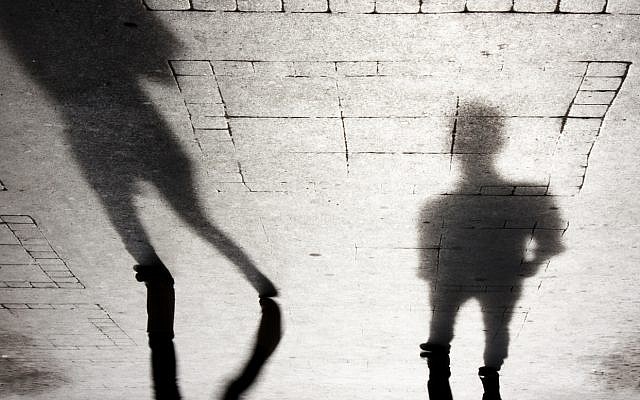 I live in Tel Aviv with my wife. I grew up in a good home. I served in an elite combat unit in the army. I work in hi-tech. If this happened to me, it can happen to anyone.

This kind of exposure is terrifying for me. But what motivates me is the possibility that I could help someone else, even one other person, to deal with their own fear and/or pain.

Last August, I signed up for an amazing workshop which combines self-awareness, tolerance, acceptance of the other, and emotional connectedness. I’ve gone back a few times as an assistant to practice my ability to support others, my empathy, and my ability to open up. (I have purposely omitted the name of the workshop because the connection to this incident is coincidental – this kind of thing can happen anywhere.)

The workshop took place at Beit Berel, where three meals are served a day. The first time I ate in the dining room, I recognized a man of about 55 years of age, serving food, and he seemed a bit off to me. I’ve been taught to pay attention and notice even people who stand in the shadows, whom society usually ignores. So each time I went by the buffet I chatted with him a bit. Hey, man. What’s up? How was your day? Two months ago, at the end of the workshop, I even gave him a hug. A friendly hug, the kind where you give each other a pat on the back, fitting for two strangers who had just met. There were no awkward feelings when we said goodbye.

Last weekend, I went back to participate in the workshop again. At breakfast on Friday I talked to him a bit, and he told me he lives close by and has a wife and a few kids. Since then he stared serving me double portions.

At Saturday’s lunch, I realized it would be the last meal for the program, so I should say goodbye to him. I said, “Rassin, I won’t see you again until next time, let me say goodbye, come, give me a hug!” He was in the middle of wiping down some tables so he said he needed to wash his hands first. I didn’t really get why he needed to wash his hands, but I went with it and followed him into the area with the sinks. When he was done washing up, I was about to say goodbye but he said, “Come with me a minute. I want to show you something.” He led me around the corner and stopped next to the bathroom. He asked me, “Want to go to the bathroom?” nodding and inclining his head towards the bathroom. I was confused for a minute, I told him I don’t need to pee. At that moment he jumped me, forced himself upon me, and hugged me hard while kissing my neck. He pushed his groin up against mine and started grinding on me in circular movements.

It all happened so fast. After a few seconds he turned around, said goodbye, and went back to the dining room.

My first instinct was to ignore it, convince myself that nothing happened and just walk right up the stairs. But the incident reminded me of something that happened when I was 16. That time it had been a 30-year-old man, who was my religious mentor and had been a friend to me since I was 13. I trusted him blindly, until the moment he violated me sexually. At that point, I entered a seven-year period of complete denial and told no one.

Now, back to last Saturday. I stopped on the stairs and told myself that I am no longer the scared, confused child that I was back then. Today I know where the boundaries are, and I know that what he did was not at all okay. I went back down to the dining room and confronted him. I shouted at him that it was not allowed, that sexually exploiting someone is illegal. He mumbled an apology and some other unintelligible things. I realized there was no point talking to him. Despite an intense urge to beat him to a pulp, I knew that would not solve anything for either of us.

So I went upstairs and told the workshop instructor. I went outside and just fell apart. I cried uncontrollably. My vision went dark, all of my repressed memories came floating back to the surface. All the feelings, the fear that I would not be believed, or that I would be judged. The sense of helplessness, that someone deprived me of my choice and touched me intimately without my permission. The anger and frustration due to finally learning to trust again and finally allowing myself physical contact, and then in one single moment everything shattered and sent me back to where I started.

I started regressing back to the place I was in for years, where I was apathetic and indifferent. But what I kept thinking – and what ultimately allowed me to escape from that mindset – was that others might be hurt by this man. For years, I felt guilty that others might have been hurt because I was in denial. I went through several extremely difficult hours that I would not have survived had I not been in a loving and supportive environment without the incredible family of the workshop around me.

The next day I spoke to the management of the workshop, of Beit Berel, and the company Rassin worked for. I told them what happened. It is important to acknowledge that they all were extremely professional about it. After that I went to the police station and filed an official complaint against him. On Sunday evening, I was notified that he was let go and would not return to work, and that the investigations are open. I know the system, and chances are that he won’t see any jail time, but at least he won’t be at Beit Berel any longer. The thought that at this moment there are other workshops going on there, some even for teenagers, reassures me that I did the right thing.

On Monday, I told my colleagues at work. I chose not to be ashamed.

What I want to say to you here is clear. It is so important for us to be there for each other when this happens. It’s important to be able to recognize when these things happen to our children, and to us. It’s not really a question of whether or not it will happen – it’s a question of when and where. A good friend of mine who is knowledgeable in the field told me that the statistics are that every woman and one out of five men in Israel experience sexual harassment at least once in their lives. The worst thing for anyone who experiences sexual assault, apart from the event itself, is the thought that they can’t tell anyone because we’ll be judged, ridiculed, and we will not be believed.

To those of you who have children, give them the feeling that they can tell you anything, always! If you are teachers, pay close attention to your students. For me, the experience came with rebelliousness, oversleeping, escapism through alcohol, a drop in my grades, running away from religion. And my teachers just chased after me and forced me to take part in prayers when what I really needed was for them to see that I was in pain, and to help me through the crisis. I don’t blame them at all. I understand today that they just didn’t know how to handle something like I was going through, and were only trying to help. But that is why awareness is so important.

One last story. On Monday, I told another friend at work, and she told me that she had been harassed three times in her life and had no idea why she never told anyone. Now she knows that she must go and talk about it, because denial can have some extremely destructive side effects.

If we could all be more open and share more, I think we’ll see that we are absolutely not the only ones who have gone through this. Slowly, in time, we’ll be able to break this terrible chain reaction. Too many of yesterday’s assault victims become tomorrow’s predators unless they get proper treatment. I am able to share my story now because I am in a place where I feel strong and safe, but there are so many more who are not there yet and we need to help them.

If anyone wants to talk to me, I’m always here, open and not judging.

And here’s a link here containing lots of information for victims of sexual assault, hotlines that give support and guidance. Don’t keep this to yourself, it’s not worth it. Believe me.

At this opportunity I would like to thank my incredible wife Anaelle, my family, and everyone who supported me over the years. You know who you are and I am eternally grateful.

NB: Since I first recounded my story, five other grown men have come forward and told me that they were sexually assaulted by the same guy as I was, and most of them in the same exact manner. In addition, many other women and men have come forward and told me their rape and sexual harassment stories for the first time, noting  that the post gave them the courage and the feeling that they are not alone. I am pointing them in the right direction to get help.

Translated from the original Hebrew by  Liora Sophie Halevi.

About the Author
Daniel was born in Teaneck, NJ. His parents made aliyah in '91, when he was 4. He grew up in Beit Shemesh and is the oldest of 10 siblings (including two foster sisters). As a teenager, he studied at the Orot Yehuda yeshiva high school in Efrat. During his army service, he served as a combat soldier in a special forces unit called "Duvdevan."He then got his degree in Architecture at the Bezalel Academy of Arts and Design in Jerusalem. He currently lives in Tel Aviv with his amazing wife, Anaelle, and works on the Portfolio Management Team at OurCrowd.
Related Topics
Related Posts
Comments