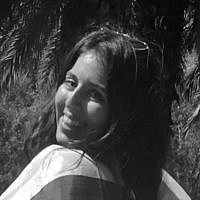 The Blogs
Chloe Levian
Apply for a Blog
Please note that the posts on The Blogs are contributed by third parties. The opinions, facts and any media content in them are presented solely by the authors, and neither The Times of Israel nor its partners assume any responsibility for them. Please contact us in case of abuse. In case of abuse,
Report this post.

I am a Persian Jewish American and I live in a society that usually allows me to embrace all three aspects of my identity.

Yet, it has become common knowledge that all Jews are all white, although many of us Jews are white or white passing, that is not the case. There are many Middle Eastern, North African, Ethiopian, Hispanic and other beautifully diverse Jews in this world and it is time that we are recognized.

Although I have never been to Iran, being Persian has always been a very proud part of my identity. From taking Persian dance classes to learn how to dance at extravagant Persian Jewish parties to having Persian food every single Shabbat dinner, my Judaism doesn’t have to be set aside for me to embrace my Persian identity.

Yes, there are occasions that my identity as a Persian Jew has confused many people. “How could you be from Iran and be Jewish?” I have been asked, or “You can’t be Jewish, Jews look like me,” I have been told by a “white” Jew. But, it doesn’t take extensive knowledge of Judaism to know one or two famous Persian Jews.

Queen Esther and her uncle Mordechai could have easily passed as non-Jews in the Persian empire, yet they used their newly gained power and prestige to save all the Jewish people from Haman’s evil plan to kill all the Jews.

During the Holocaust, Persian Jews were so assimilated that the Iranian regime was certain they would convert to Islam and did not send them to concentraiton camps. Somehow even as “second class citizens,” Persian Jews were considered Aryan.

At the 2020 AIPAC policy conference, Iran was the main topic of many speeches, yet the way that the speakers pronounced Iran (i-RAN) continued to upset me.

I am an unapologetic Zionist Jew, but each time someone said “i-RAN” I corrected them under my breath, “it’s ‘ee-RON.'”

I shouldn’t care that most of the Presidential candidates or the many speakers at AIPAC don’t know how to say Iran, they recognize that Iran is the number one state sponsor of antisemitism in the world. Yet, as secretary of state Micheal Pompeo said during his speech at AIPAC, “the nobleIranian people do not hate Israel, or Jews, or any other religious group. It’s the bigoted, intolerant regime that does.”

As a proud Persian Jew, I ask, please try to correctly pronounce Iran (ee-RON) and please remember that not all Jews are white.

About the Author
Chloe is a leader, teacher, and student with aspirations to make a tangible difference in the world. She is also on the board of Students Supporting Israel at Santa Monica College, a StandWithUs Emerson Campus Fellow, an Intern at the Museum of Tolerance, and a Sinai Temple Religious School Teacher.
Related Topics
Related Posts
Comments