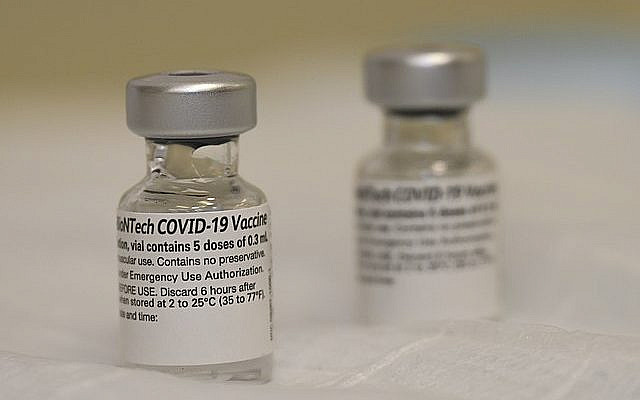 There has been a debate raging for months as to whether the state of Israel should offer to provide vaccinations for the Palestinians in the West Bank and Gaza. It is time for the debate to end and for it to actually happen! A petition is being brought to the Supreme Court of Israel this week which hopefully will finally resolve this issue. Let me explain why this is important

First of all, it is the moral thing to do. Yes, it is simply the right thing to do for people who are our neighbors, with whom we should want to live in peace, and who are under our control from the point of view of international law. Rather than shipping vaccines abroad for narrow political reasons, it would behoove the State of Israel to use the rather large supply of vaccines that it already has in storage, for this purpose. According to media reports, Israel is holding millions of surplus doses in its warehouses including 10 million AstraZeneca doses which it has said it does not intend to use!

Secondly, from the point of public health, this is the correct thing to do for both the Palestinians and the Israelis since both peoples live in the same epidemiological community, according to public health experts. According to Ronny Linder, who wrote an important article on this issue in Haaretz on April, 28th, many public health officials and influential organizations, have been pushing for this since January of this year:

In January, the cabinet of experts, the leading professional and non-political organization advising the COVID-19 czar, said that ‘All those present agree that vaccinating the Palestinian population is a clear need, due to the fact that the Palestinian and Israeli populations are epidemiological communicating vessels. We must take active steps, to the degree that the PA agrees to be assisted by Israel, to help this population be vaccinated.’ The cabinet members included members of Israel’s national program for fighting the coronavirus and Health Ministry representatives.

Yet, instead of active steps, for the last four months, all we have heard is talk, which has led to delay after delay in getting this done.

Thirdly, vaccinating Palestinians in the West Bank and Gaza is not only the moral and the correct public health policy for Israel, but it would be in Israel’s political interest as well. Doing so would boost Israel’s moral stature in the world, which is something very much needed nowadays. It would also enhance Israel in the sphere of international relations, which would also be useful for our foreign policy.

Instead of offering phony excuses that say the Oslo Agreements turned over health management to the Palestinians, the State of Israel should recognize its responsibility as an occupying power to abide by international law on this matter. Israel ignores whatever it wants to with regard to the Oslo agreements of the early 1990s most of the time. It operates all over the Palestinian territories whenever it deems fit, mostly for so-called security reasons. So, it is a bit strange, not to mention hypocritical, for Israel to hide behind this phony phraseology right now.

Fourth, vaccinating the Palestinians in the West Bank and Gaza also has positive security implications. Such a step would undoubtedly help prevent violence from a frustrated populace who see no end to the covid-19 pandemic where they live, whereas right next door Israel has become almost fully vaccinated as far as its high-risk population goes, and most of the restrictions relating to living with the pandemic have been removed as Israel’s numbers of people dying from the virus have rapidly declined.

This issue will be brought to Israel’s High Court of Justice this week, in a petition filed by 6 human rights organizations demanding that Israel deliver vaccines to the Palestinians. Indeed, in the world we live in now, getting this vaccine ought to be a human right. One can hope that the Supreme Court—which usually takes moral, reasonable and enlightened positions on issues like this in Israeli society– will recommend immediate action in this matter.

For ethical, legal, humanitarian and public health reasons, it is time to provide much-needed vaccines to our Palestinian neighbors in the West Bank and Gaza now.