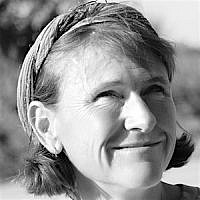 The Blogs
Heather Gelb
Apply for a Blog
Please note that the posts on The Blogs are contributed by third parties. The opinions, facts and any media content in them are presented solely by the authors, and neither The Times of Israel nor its partners assume any responsibility for them. Please contact us in case of abuse. In case of abuse,
Report this post.

I would like to start this blog with a parable you may have already heard.

And even if you have, it helps to be reminded of the message every once in a while.

Once upon a time, there was an old man who used to go to the ocean to do his writing. Early one morning, he was walking along the shore after a big storm had passed and found the vast beach littered with starfish as far as the eye could see, stretching in both directions.

Off in the distance, the old man noticed a small boy approaching.  As the boy walked, he paused every so often and as he grew closer, the man could see that he was occasionally bending down to pick up an object and throw it into the sea.  The boy came closer still and the man called out, “Good morning!  May I ask what it is that you are doing?”

The boy paused, looked up, and replied, “Throwing starfish into the ocean. The tide has washed them up onto the beach and they can’t return to the sea by themselves.  When the sun gets high, they will die, unless I throw them back into the water.”

The old man looked skeptical. “But there must be tens of thousands of starfish on this beach. I’m afraid you won’t really be able to make much of a difference.”

Adapted from “The Star Thrower” by Loren Eiseley

From the Jewish perspective, we have this G-d given drive towards tikkun olam, a drive to leave the world in a better state than what we were born into. We all have the opportunity to make a difference by creating positive change, but if you’re like me, you sometimes find yourself asking that useless rhetorical question: “I am just one person, what difference could I possibly make?” Or fall into that other false belief, that it is more praiseworthy to ignore each individual struggling starfish, and instead to focus energy on saving the whole ocean.

My understanding of the value of each individual starfish has been reinforced by my recent return visit to Rwanda.

Twenty-three years ago, I was a Peace Corps volunteer working in a rural Rwandan health center, a universal Jew on a mission to save a small part of the world.

Oh, yes, I had big ideas, such as organizing a small business for a group of local women, procuring funds for a growing farming co-op comprised of ambitious youth with a mission to build a restaurant that would serve nutritious food to patients at the local health center, create a community theater program to promote good health messages in the schools, and so much more.

Although at the same time I was also sowing deep friendships from among the Rwandan people, I believed that to really make a difference, I must do something BIG, right?

But then, fingers of violence and civil unrest between the Hutu and Tutsi people inched closer to our village and I was forced to leave Rwanda with the other Peace Corps volunteers.

A year later, in 1994, a genocidal war had covered that small country of a thousand hills with destruction and hundreds of thousands of shallow graves, and blew away any good I thought I had done, like withered blades of dead grass.

I ended up living and raising a family in Israel, an unusual journey which I detail in my recently released book:

From Hilltop to Hilltop: My Path from Rwanda to Israel https://www.amazon.com/Hilltop-My-Path-Rwanda-Israel/dp/1937623076

Over the years, I kept in touch with my friends who survived, sending blessing, encouragement and occasionally, modest financial aid for their growing families as they rose from the ashes.

And then came the opportunity this summer to return to Rwanda with my husband and one of my teenage boys.

Our first destination was the Kigali Genocide Memorial, a museum which commemorates the Rwandan genocide in 1994 and is also the resting place of over 250,000 of the people who were murdered. This is the same memorial that our Prime Minister of Israel, Bibi Netanyahu, had visited during his trip to Rwanda a few weeks before us.

My husband, son and I, so soon off the plane from Israel, felt the special significance of our Rwandan friends personally guiding us through their memorial while sharing their stories of survival and feeling connected to Israel as a model of a people full of hope, faith and resilience.

Our second and main destination was to the small village from my Peace Corps days, a two-hour drive south of the capital, Kigali.  We spent two full days visiting house to house, friend to friend, family to family. They no longer identified each other at Tutsi and Hutu, but as a unified Rwandan people.

And they all remembered me. I was sincerely surprised to hear over and over again how I had made a difference in their lives.

Really? But I thought all my attempts at tikkun olam in their part of the world were buried in their war, or blown away like withered blades of dead grass.

And then, as they say in Israel, “the asimon fell” – the penny dropped.

They didn’t remember me for those “big” things, such as the agricultural and small business projects, nor the many other projects they had asked for.

Into each home I was warmly welcomed with fruits from their fields, songs from their heart and stories about me that mattered to them, like how I had carried one of their injured children on my back a kilometer down the road to the health center; how I had visited the sick at all hours of the night; how I sang with them in the choir, danced with them at celebrations… all the “small things. The kind gestures of friendship. That is what they remembered. That is what survived the war and what made a difference to them.

In the bigger arena, a friendship between Israel and Rwanda is being sowed. Netanyahu told Rwandan President Paul Kagame on July 6: “We’re determined to work together in so many fields to secure a future of security, prosperity and peace for all our peoples.” And Likud MK Neguise added: “We now have the opportunity to further strengthen the relations between the countries (Rwanda and Israel) in a variety of fields, specifically in parliamentary relations.”

Israel has also been creating positive change in Rwanda through Gigawatt Global. “Arise, shine for your light has come,” reads a sign at the entrance to the first major solar power grid-connected farm in Rwanda and East Africa.

This progressive farm is on the same land as the Agahozo-Shalom Youth Village, a special project of the American Jewish Joint Distribution Committee (JDC) which is modeled after Israeli youth villages that were originally built to care for orphaned children after the Holocaust. Israel has spread its light to Rwanda to care for her most vulnerable children orphaned before and after the genocide.

Israel and Rwanda.  Wonderful!  We need the BIG stuff. The political and humanitarian friendships.

But the small friendships also matter. Heather and Mukashema, and Nakabonye, and Kabalisa, and Byiringiro, and Nduwamungu, and all the others.

So you see, it helps me to remember the Starfish Story. I may not be able to change the entire world, but at least I can make a difference to someone, valuing each starfish as I strengthen friendships one by one.

Let the Starfish Story also help you as you look for those starfish in your daily life – bringing joy to that one person through your kind smile, encouraging word, and extended hand.

About the Author
Heather is an aspiring writer, poet, tap dancer, banjo player, holistic nutritionist, amateur actress, world traveler and long distance runner who is raising her five children among the Judean hills in a house that her husband built. She recently published her memoir, a spiritual journey entitled From Hilltop to Hilltop: My Path from Rwanda to Israel.
Related Topics
Related Posts
Comments