“The silicone chip inside her head got switched to overload . . .”  Is the first line of the song “I don’t like Mondays” by The Boomtown (1979).

The song has been playing in my head since I first heard of the Fourth of July – Highland Park Massacre, which was committed by twenty-one-year-old Robert “Bobby” Crimo, III.

“I don’t like Monday’s” is a song written by Bob Geldof about a teenage girl who went on shooting spree in San Diego, California on January 29, 1979.  Sixteen-year-old Brenda Ann Spencer,  shot at school children on the playground at Grover Cleveland Elementary School.  Brenda Spencer murdered two adults, and injured eight children and a police officer. She was the first known female mass school shooter in the United States.

Back on May 20, 1988 Laurie Wasserman – Dann, who was also raised in Highland Park, went on a shooting rampage at the Hubbard Woods Elementary School in the nearby suburb of Winnetka, IL. Dann murdered eight-year-old Nicholas B. Corwin, and injured several others.

The case of Laurie Dann was another case in which the warning signs were there, yet ignored by her parents, neighbors, friends, mental health professionals, law enforcement officials and the community.

My heart goes out to each and every single person who was injured, along with the families who lost loved ones, and also those who witnessed the atrocity that occurred in Highland Park on July 4, 2022. Not one person who’s family member or friend who was murdered, injured or witnessed this massacre deserves to have to live the rest of their lives with this memory.

I want to say this loud and clear, I do NOT condone Bobby Crimo’s actions.  His actions were that of a deranged terrorist, yet I still don’t hold him totally responsible for his actions.

The signs were out there for years that Robert E. Crimo, III was having serious emotional and psychological issues.  For years this young man was screaming out for help, yet his cries were ignored.

Looking at the dynamics of Bobby Crimo’s family and childhood — from what’s being shared in the news media — it’s shocking that child protective services did not have involvement with the Crimo family.

Bobby E. Crimo was born on September, 20, 2000. As a young child it’s been reported that Bobby and his siblings were often left to fend for themselves. Growing up their mother Denise Pesina and father Robert Crimo, JR, often forgot to pick them up from after school programs.

According to reports, Bobby Crimo lived  with his father and uncle in a home once owned by his grandfather.  His mother, Denise Pesina, 48, lived nearby in her own home.

Denise Pesina is a holistic practitioner, who promotes alternative therapies.  According to her Facebook profile (which has recently been removed), she described herself as healer, and owns a business called Trilogy Energy Systems.  Pesina studied Traditional Chinese Medicine at Shanghai University and at the Ayurvedic Institute.

Back in February, 2015 when Bobby Crimo was around fourteen, Denise Pesina was arrested in Highland Park on charges of domestic battery while driving.  No more information about the arrest is known.

Bobby Crimo’s father,  Robert “Bob” Crimo Jr, 58, ran an unsuccessful campaign to become mayor of Highland Park back in 2019.  This was the same year that Bobby attempted suicide and also threatened to murder his family.  His father also owned a convince store.

A few months after Bobby Crimo attempted suicide, and after threatening to kill his family — Bobby Crimo’s father sponsored the application allowing his nineteen year old son to purchase firearms.  With Bobby’s firearm owners identification card he was able to legally purchase the AR-15 used to slaughter his hometown of Highland Park, Illinois.

With every thing I’ve read, and after watching  Bobby Crimo’s music videos, I can’t help but feel bad for this young man on several levels.  Bobby Crimo had been screaming out for help for several years, yet no one cared enough to listen.  It appears that his parents and his community enabled this young man in ways which prevented him from receiving the psychological help Bobby desperately needed.

Highwood resident, Michele Rebollar shared with The Daily Beast of her experience of Bobby Crimo at her son Anthony LaPorte’s funeral (who died of a drug overdose) in August of 2017.  At the time Bobby Crimo was around sixteen years old.

Rebollar is quoted as saying that Bobby Crimo stood up in the church and shared that her son Anthony was one of the only people that Bobby trusted enough to confide in.

According to The Daily Beast (who able to watch the video of the memorial service), Bobby made the following statements:

My name is Bobby, and Anthony was the person I would call when I couldn’t sleep and he would always reply” . . . “And he was always free to hang out and whenever I was with him. It felt like I wasn’t alone anymore, like I had somebody there, like, that was actually there” . . . “There were so many nights we would just keep walking ‘cause both of us could never sleep and our conversations would be so deep. I really did love Anthony. He was a really good friend,

After these statements were made, it appears that no one at the church reached out to Bobby to offer him support.  Bobby Crimo’s words were obviously made by a child crying out for help.

Bobby Crimo attended Highland Park High School from around 2014 to 2018.  During this time  there were plenty of red flags that the teenage Bobby Crimo was in trouble.  It was reported that several of Bobby’s classmates complained about his bizarre behavior, yet the teenager’s behavioral cries for help went ignored.

On April 29, 2019, nearly a year after Bobby should have graduated from high school, Bobby attempted suicide.

In September, 2019, a few months after allegations were made that Bobby threatened to “kill everyone” in his family with a machete.  At the time, nineteen-year-old Crimo collected knives, a dagger and a sword.  All of which were confiscated by the Highland Park Police.

Once again signs of a child crying out for help were ignored.  What I don’t understand is that when a person is a danger to themselves or others usually that person is placed under a psychiatric hold for up to 72 hours.  To the best of my knowledge Bobby Crimo was NOT psychiatrically hospitalized after attempting suicide or threatening to murder his family.  My question is why?

Back in April of this year, during the Jewish holiday of Passover, Bobby Crimo entered a synagogue, sat down and was listening to the prayers. From reports Bobby was wearing a kipah (yarmulke).

The rabbi of the synagogue looked at this young man and determined he didn’t belong.  He then asked Bobby to leave. Crimo complied and left quietly.

I’ll admit that no one knows what was going on in the mind of Bobby Crimo during Passover Seder.  With the increase of antisemitism and hate crimes against Jews it makes sense that the rabbi would ask him to leave.  The rabbi wanted to make sure his congregation was safe.

With a great deal of thought, and after reading about Bobby Crimo’s life — I have to wonder if this young man was once again reaching out for help?  Perhaps Bobby was trying to find answers to his problems from God?

Considering Bobby grew up in Highland Park, and so many of his classmates were Jewish — I wonder if he might have assumed his Jewish neighbors had their lives together.  Maybe he wanted to be like them.  I keep asking myself if that could be why Bobby entered the synagogue?

I really wish someone would have communicated with Bobby a bit on Passover before tossing him aside. Yet it makes perfect sense why the rabbi requested the long haired, tattooed young man, who looked scary — and the rabbi didn’t believe was Jewish, to leave.

I could go on and on, about all the times Bobby Crimo’s  cries for help were ignored.  I’m angry at his parents, law enforcement, the school system, and the local mental health agency, the community, etc.  We all need to feel responsible for what occurred, and make changes with the way we handle kids at risk.  Their cries CAN NOT be ignored. 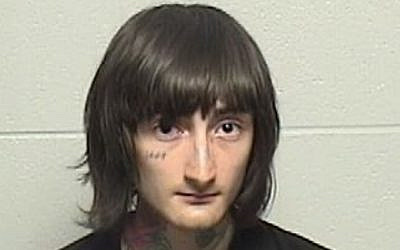 The point I’m trying to make is that there are other young people out there like Bobby Crimo. If we ALL keep ignoring their behaviors, their artwork, and their actions — which are all cries for help, more innocent lives will be taken.

About the Author
Vicki Polin is a feminist who has been a Social Justice Activist since her childhood. Vicki is also an award winning, retired psychotherapist who worked in the anti-rape field for just under forty years. For fun Vicki is an artist and nature photographer.
Related Topics
Related Posts