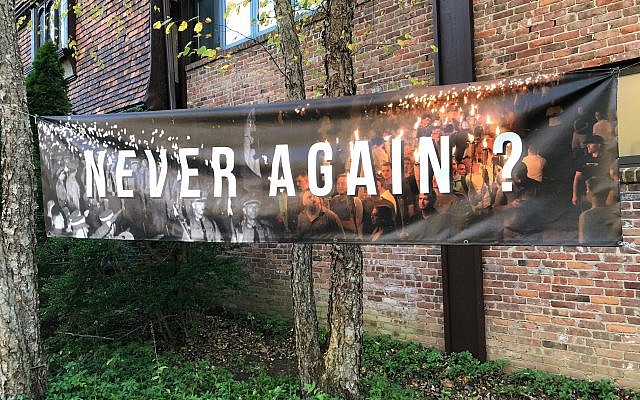 Approaching the majestic structure of The Community Synagogue, a thriving bastion of Reform Judaism in New York’s affluent Long Island hamlet of Port Washington, it was the question mark at the edge of a long banner hung at the mansion’s entrance that grabbed my attention. Emblazoned over juxtaposed photographs of two marches – one of Nazi soldiers in Germany and the other of white supremacists in Charlottesville – were the words “NEVER AGAIN?”

It was just two weeks after the Tree of Life Shabbat massacre, but the sign, I was assured, had been in place long before that.

Having been raised in a family actively involved in Great Neck’s Reform Jewish community just across Manhasset Bay, I felt peculiarly out of place and found the message particularly perturbing. The last I had heard, America’s Jews felt very much at home right where they were – and the more liberal the more so.

True, living in Israel for the past 44 years, I wasn’t delighted when Professor Jacob Neusner proclaimed more than 30 years ago that “It’s time to say that America is a better place to be a Jew than Jerusalem,” but neither could I ignore that this 1987 assertion of his appearing in The Washington Post went essentially unchallenged. “Jews feel safe and secure here in ways that they do not and cannot in the State of Israel,” he wrote, concluding that “for here, now and for whatever future anyone can foresee, America has turned out to be our Promised Land.”

His was a mindset that for three decades has stood the test of time. Only seven months ago, Jane Eisner, editor-in-chief of the Forward, echoed his sentiments in an op-ed penned for the likes of me entitled, “It’s Time For Israel To Recognize That Diaspora Jews Are Already Home.” In the piece,  she also turned to her local readers, writing that “I suggest that those of us in the Diaspora think of ourselves as being at home,” emphasizing her point by proposing “To begin with, let’s leave behind the outdated notion of ‘Diaspora.’”

Thus the question mark that threw me. Was that banner hanging in front of The Community Synagogue an anomaly? I assumed so, and was prepared to dismiss it as the reflection of the disaffection of a small group of congregants, who, to my mind, must certainly embody an aberration from the general sense of ease and comfort with which Jews had ensconced themselves in mainstream America. Until I asked my mother what she thought.

“Of course the question mark belongs there,” she told me, surprised that I could think otherwise. “In Germany they didn’t think it was possible either.” The wrong observer, I thought to myself. Mom, after all, was born in 1924, a witness to the Holocaust (though from the safe distance of Brooklyn) whose worldview has been informed by the atrocities of WWII, the miracle of Israel’s independence, and the frailty of Jewish statehood epitomized and eternalized during the Six Day War. Clearly I needed a more dispassionate pundit to corroborate my presumption.

Fortunately, 31 of them showed up at the extended family’s Thanksgiving table, all of them effusively liberal and several who have been comfortably intermarried for decades – just the sort of critics I needed to tell me that that troublesome question mark was out of place.

Not one of them was prepared to cooperate. Not only were they unsurprised by the punctuation, most wholly endorsed it. “It doesn’t feel safe anymore in Trump’s America,” I was told. “It’s the Jews, but not only the Jews. Everyone who’s not part of the entitled majority feels threatened.” Others complained about the phenomenon of intersectionality infesting the Women’s March movement, whose leaders have embraced Nation of Islam leader Louis Farrakhan who has scorned the “Satanic Jews who have infected the whole world with poison and deceit,” the same Jews he has also referred to as termites. A sister who was outraged over this declared she’d managed to get an apology out of one of the organizers; another chimed in that “this doesn’t mean it really changes how she feels  about us.”

The Pittsburgh shooting, of course, was also invoked as a blatant example of the anti-Semitism that is out there. “But as horrific as that was,” I asked, “do you really see it as being anything more than an isolated incident?”

“There were swastikas painted on cars in Kingston,” submitted one relative who lives there.

“Two weeks ago Jewish kids here in Connecticut complained about being harassed and terrified,” said another, referring to what was going on in a local high school where swastikas were found carved into a desk and bathroom stall and the words “These Jews deserve to die” and “We are the Nazis” were overheard in the hallways. The photograph of a man and his young children dressed up as Nazis for Halloween, a Hitler mustache painted on the face of the little boy, was also mentioned.

“The fascists in Charlottesville weren’t only marching against the blacks. They were also chanting vicious things about the Jews,” added another. “And what about the smear campaign against Soros? There are millions who support Trump’s xenophobic policies and who are bolstered by his incendiary rhetoric. People have lost any sense of morality.”

It’s as if those assembled were documenting the Anti-Defamation League’s recent report of the more than 2000 anti-Semitic incidents recorded in the United States in 2017, a 57% increase over the previous year – and all this was before Elizabeth Midlarsky, a professor at Columbia University, came to work last week and found swastikas spray-painted on her office walls.

“But this is America,” I continued to counter, still unprepared for the degree of gravity which my impromptu focus group was attributing to what was going on in an America I didn’t recognize.

“America is not so special,” was the rejoinder. An America I didn’t know was there when growing up. An America beyond the “foreseeable future” Neusner prophesied. An America in which the foundations of Eisner’s home in the Diaspora she would deny are a bit less secure than they were last April. An America post-Charlottesville and post-Pittsburgh.

An America with a big fat question mark where I never expected to find one.

An America in which the light of the Menorah, symbolizing the ascendancy of right over might, is more indispensable than ever. Happy Chanukah.

About the Author
Dr. David Breakstone is the Executive Director of the Yitzhak Navon Center for a Shared Society. He previously served as deputy chair of the Jewish Agency executive and the World Zionist Organization and as the conceptual architect and founding director of the Herzl Museum and Educational center in Jerusalem. He welcomes correspondence from those determined to forge Israel as the shared society it was always meant to be at breakstonedavid@gmail.com.
Comments

14 years after his death, megastar Paul Newman’s memoir is a portal into his soul
Renee Ghert-Zand
Advertisement