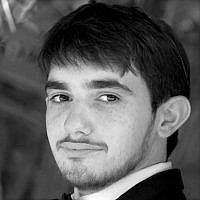 The Blogs
Yochanan Brody
Apply for a Blog
Advertisement
Please note that the posts on The Blogs are contributed by third parties. The opinions, facts and any media content in them are presented solely by the authors, and neither The Times of Israel nor its partners assume any responsibility for them. Please contact us in case of abuse. In case of abuse,
Report this post.

I’m getting really sick of these hysterical pronunciations of doom.

Lets stop and take stock for a moment. Trump is not the first, nor will he be that last candidate prophesied to be the fifth horseman of the apocalypse.

People panic every change, they always have and always will.

But here’s what you need to know:
No, your candidate didn’t win, that happens in a democracy. It’s part of the price you pay for the right to vote, everyone else gets to vote too.

No, Trump can’t just cancel the universal healthcare plan, he needs to give an alternative that Congress accepts.

The President cannot actually enact any laws, rules, war, etc. Laws are drafted and voted upon by Congress. The president can enact or veto the law. War requires an act of Congress.

I hear you say “What about executive decisions?”

Executive orders from the president are a lot more limited than you think and usually have quite a lot of oversight and can cause an impeachment, the main issue is that the Democrats let so many abuses of the use of executive power slide when Obama was a president that they will have a hard time opposing it now.

“But what if…” How many candidates make how many promises and how many actually keep them?

“He’s going to outlaw being gay” I highly doubt that,he’d need to convince the Supreme Court first because If you’ll remember, the Supreme Court (who use the Constitution as their guide) claimed that it was peoples constitutional right to be wed to members of the same sex, only the supreme court can undo that decision.

“What about being Muslim?” Check the First Amendment, it guarantees freedom of religion.

“But I’m a minority” Look at the 14th amendment, it has you covered.

“Congress is Republican!” Yes, although a bunch of Republicans who do not like Trump or his policies very much. With every president you get a mess of Congress, some stupid laws will pass, some won’t, we won’t die bathed in the blood of innocents.

“What about Immigrants? and the wall?” Do you know how many undocumented immigrants are in America from how many different countries? Do you think those countries want these individuals back? Even if they do, who is covering the bill? Mexico certainly isn’t. Worse is the wall….. one of Trumps most ridiculous statements. You’re talking about a wall that would stretch 2,000 miles… That’s a lot of ground to cover while patrolling. Do you really think anything is really going to stop Mexicans leaking into America? It’s going to be a waste of money and resources. On the bright side, there will probably be quite a few jobs available because of it.

People are angry, that’s fine, but Trump is no more the devil than Obama is a Muslim.

Yes, he has said some pretty disgusting stuff, so what? If he tries something like that ever again he’ll be impeached.

Words are words and actions are actions so spare me the drama.
When something happens I’ll be among the first to oppose it if I think it’s wrong (I’m a lot likelier to snipe it with witty comments from my chair). barring or until that happens, I choose to try and give him the benefit of the doubt.

Secretary Clinton spoke about healing the rift between Americans. How about we start by stopping to hate them?

About the Author
Yochanan Brody, 23, was born and raised in Israel to immigrant parents. He is a collector of antiques and oddities, a massive bibliophile and an amateur historian.
Comments