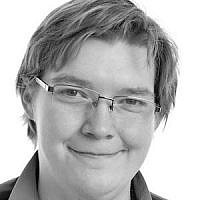 The Blogs
Sarah McCulloch
Apply for a Blog
Please note that the posts on The Blogs are contributed by third parties. The opinions, facts and any media content in them are presented solely by the authors, and neither The Times of Israel nor its partners assume any responsibility for them. Please contact us in case of abuse. In case of abuse,
Report this post.

Yachad, the pro-peace British Jewish campaign group recently funded a piece of research by City University that found something that let’s face it, most of us in the British Jewish community already know – British Jews feel a sense of commitment to, affection for and identity with Israel, fear for its security, but are profoundly embarrassed by the Israeli government’s ongoing approach to the peace process with the Palestinians, believing it to be counter-productive and largely indefensible.

The social media response was as predictable as it was irrational. Allegations that the poll isn’t representative, that it was biased or asked leading questions, that “everyone knows” that the problem is the Palestinians not being a partner for peace, that Yachad only ever attacks Israel and never defends it, etc. etc.

These are pretty simple enough to respond to, though they obscure the broader meaning to this research. Complaining that polling a representative sample of 1,131 British Jews isn’t representative is not only a simple matter of failing to understand how mathematics works, accepting this principle would also invalidate the Jewish Chronicle poll that’s been brandished by many that found that 67% of 1,000 British Jews randomly sampled by Survation would have voted for Likud in the Israeli general election. If City University’s research is not representative, why is this poll? In fact you will see in the JC’s poll, if you read the sampling methodology, they don’t even bother to weigh it against synagogue affiliation or religious observance which time and again come out as the biggest influencing factor on political opinions of the members of Anglo-Jewry. City University’s research does in great detail.

The reality seems to be that those who are calling the report out as “biased”, are doing so because it does not agree with their views. They complain that the survey asked leading questions like “I feel a sense of despair when Israel approves further expansion of the settlements in the West Bank.” I will dwell on this point for the sake of science.

If you look at the actual questions asked (which you can do by requesting them, as I did), which were designed by a panel of social researchers, you can see they use multiple perspectives to ensure objectivity. For example, here are the statements people were asked to rate the section on attitudes to the peace process:

Most will feel alienated by the wording of some and warmer towards others. That’s the point, to obtain a more objective set of data that purposely strips out the bias, rather than adding it in. Again, these are basic, standard research methods. That people saw a single question and inferred that the entire survey was “misleading”, says much about their grasp of quantitative research and subsequent legitimacy of their criticism in this area.

But let’s face it, this criticism was not levelled from a genuine concern for the public understanding of methodology. Was it?

What’s significant about the research is not that the vast majority of British Jews feel connected to Israel, support it as a Jewish state, hate it when double standards are applied to Israel internationally, but recognise that the Israeli government is simply shooting itself in the foot when it comes to the long-term security and economic welfare of the nation (the occupation costing billions of shekels that is coming out of taxes that are not going into public services). I live in the British Jewish community and I read the news – I knew that. I feel that. As Anshel Pfeffer noted in Haaretz:

Some of the newspapers in Britain that have reported the survey highlighted the widespread criticism of Israel’s policies among British Jews, as if it should be surprising. But why should it be? Believing in the necessity and justice of the Jewish state while deploring the actions of its elected government is the most moral and sensible position to take. Assuming that a majority of British Jews does not hold such a position is an insult to their intelligence. In a sense, the results should come as a surprise only to those who are not really acquainted with a wide range of British Jews or those who simply don’t think they are capable of nuanced political thinking.

What this research actually shows is that the majority of people are much more nuanced in their relationship to Israel and can be described as critical friends. When most major British Jewish communal institutions feel obliged to defend Israel no matter what it does, and the Zionist right tag-team each other to create the loudest echo in the chamber of public discourse, it can seem like you’re a bit weird to believe that maybe maintaining an indefinite occupation of millions of people is economically and ethically ruinous. This survey demonstrates objectively and scientifically that those who think that are not a minority by any means.

What these findings show is also broadly in line with the last major survey on British Jewish attitudes towards Israel, conducted by the Institute for Jewish Policy Research in 2010, the only significant difference between that the numbers of British Jews defining as Zionists has dropped from 72% to 59% over that period, as support for Israel remains high – suggesting that committed supporters of Israel are increasingly refusing to identify as Zionists as it steadily becomes synonymous with a particular right-wing perspective that most are left cold by.

Where I feel this survey brings something truly new to the table was asking participants to rate how widely they felt their views were shared by other Jews. The disparity was remarkable. For each question considered “hawkish”, the participants who agreed believed that nearly double the number of people who agreed with them who actually did (by contrast, the “doves” consistently underestimated their own strength, though by a much smaller margin). Approximately 14% of British Jews believe that “Palestinians have no legitimate claim to a land of their own”. But those 14% believed that 49% of British Jewry agreed with them. This finally explained my experience of meeting people in Jewish environments who say things about Palestine that I couldn’t believe they actually understood they were saying out loud. When you realise that they assume that every Jew in the room agrees with them, it makes so much more sense. No wonder when the truth does comes out, they just can’t believe it.

The conclusions of this research is that the majority of British Jews have a deep abiding love for Israel, but are not blind to the long-term implications of the current policies pursued by the Israeli government. This is not especially ground-breaking. But the fact that the media have treated it as if it is, and the outraged reaction in some quarters that this research has received, attempting to dismiss its methods even as they cite research conducted in the same manner, show why it is important to get the information out into the public domain. Israel’s future as a Jewish, democratic state can only be secured through a meaningful peace agreement with the Palestinian people. All of us who know this must not allow ourselves to be drowned out by ideologues who genuinely seem to believe that the issue will just go away if they just talk for long enough.

As for “why do you never defend Israel” — that’s what I’m doing, right now.

About the Author
Sarah McCulloch is a Jewish occupational therapist specialising in mental health and logical argument. She lives in London.
Related Topics
Related Posts
Comments