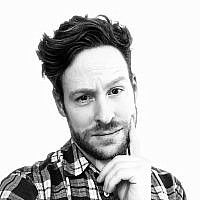 The Blogs
Aaron Bilek
Apply for a Blog
Advertisement
Please note that the posts on The Blogs are contributed by third parties. The opinions, facts and any media content in them are presented solely by the authors, and neither The Times of Israel nor its partners assume any responsibility for them. Please contact us in case of abuse. In case of abuse,
Report this post.

I’ve never been a protest-going, flag-waving gay. I’ve always thought of myself as a “quiet” activist. This quiet activism dovetailed nicely with the Jewish imperative of hachnasat orchim (the welcoming of guests), which for me meant opening our home to friends and strangers alike, to show them the life my husband and I have made for ourselves in this unique city of Tel Aviv. It’s about not just being out of the closet, but actively welcoming people into our lives and showing them our way of being LGTBQ religious Jews in Israel in the 21st century.

Aside from speaking to media outlets and being the subject of more than a few academic works (mostly middle-schoolers’ “My First Interview” but also the occasional college or doctoral thesis), we’ve hosted some very distressed people from complicated backgrounds: a young gay castoff from Meah Shearim; trans people from conservative religious homes; lone soldiers in the coming-out process. Young LGBTQ people in general, and those from religious backgrounds in particular, often cope with incredible challenges in their day-to-day lives. They face assaults on their self-esteem and their sense of belonging to their communities, they are taught to believe they are either sinful or insane, and they are shackled with a yoke of guilt which might take a lifetime to cast off. Depression and anxiety are familiar, and for many, so are suicidal thoughts. Hope and direction may help some of them to extricate themselves from the morass of self-hatred and the closet. That’s why it’s been so important to my husband and me to open our home to people and show them, well, what we are up to. While many models exist for religious LGBTQ people to lead fulfilling lives, having a nuclear family with children in a warm Jewish home, is one which many people can relate to and may wish for themselves.

A few years ago my husband and I participated in a reality-TV cooking competition where unbeknownst to us we would be paired with a young, ultra right-wing antigay settler couple, as well as a delightfully kooky spiritual medium and her illusionist husband. This show was less about hosting a gourmet meal and more about the social experiment. The settler couple said atrocious things about us on national TV and made terrible food, but needless to say, the gays from Tel Aviv got a great reality-TV edit and won the contest handily. The prize? A trip to northern Italy in February 2020, which thankfully didn’t work out for a reason unrelated to the original outbreak of COVID in Europe: the birth of our second son. We didn’t participate in this show for the prize or the fame, although we did become D-level celebrities, and are still recognized from time-to-time. We participated to allow the camera to show people – some of whom might be in dire straits – our model for family, home, and the fulfilling Jewish life that we have built for ourselves.

Since the last elections however, I have felt that my quiet activism isn’t cutting it anymore. I think I’ve been going through the seven stages of grief. It started with shock, progressed very clearly through denial (did anyone else believe that the coalition might not actually form, and that Lapid would keep on being Interim PM forever?) I think I’m now at stage three – anger. (Spoiler alert: I skipped ahead to chapter four and discovered that it is bargaining. This is something I have become good at since I moved to Israel. At least I have something to look forward to before sinking into stage five, depression.) Now that reality has sunk in, and we have entered into a new normal where antigay rhetoric and action are becoming mainstream, I have felt a need to change my approach. I’m still not into flag-waving and going to protests, though. I don’t have enough friends for Facebook, I’m too verbose for Twitter, and I’m not cool enough for Instagram. TikTok is out of the question; I’m too afraid of the Chinese Communist Party. So all that was left for me was to start a blog at the Times of Israel.

While I still intend to welcome people into my home, this isn’t the time for quiet activism. It’s not the time for anything quiet. All the creeps are coming out of the woodwork and they’ve declared open season on us queers. MK Orit Struck says that religious medical professionals (like me) should be allowed to deny services to “certain people” if it goes against their religious sensibilities; at least she was politely opaque about who she was referring to. Thankfully MK Simcha Rothman clarified rather gleefully for anyone who hadn’t gotten the gist, that they were talking about LGBTQ people, and that business owners should be allowed not to serve anyone they consider untouchable. Don’t get me started on MK Avi Maoz (I think I’ll reserve a whole blog post for him.) Even before the point of legislature, the mainstreaming of this discriminatory discourse is connecting with tendencies already latent within Israeli society. In October, a trans man in Eilat named Andy Ziv was refused a hormone injection by a nurse when she decided his transition wasn’t in line with her interpretation of religious law. Coming soon: much more of this sort of thing.

Aside from a preview on discriminatory antigay legislature, it’s come back into rabbinical fashion to blame LGBTQ for all sorts of problems. Blaming us for earthquakes is very 20th century, so now rabbis are blaming us for more modern calamities such as COVID and the Meron tragedy. Since discovering these supernatural powers, I’ve been embracing my inner voodoo doll. Every time my wrist gets floppy, a Haredi kid drops his ice cream cone. Every time I listen to Madonna, a flower wilts in a settlement. Every time I wear something too tight around the hips, the Sephardic chief rabbi gets a snag in his gown. Pride parades? Gevalt! Better check the Richter scale.

Thankfully we have Bibi to defend us. He promised us that LGBTQ rights will be protected. He’s got two hands on the steering wheel. In fact he even made the coalition’s token gay MK Amir Ohana Speaker of the Knesset (cue puking ultra-orthodox coalition partners.) He gave Ohana a vote-whatever-you-want card on LGBT issues (which of course Ohana won’t need because LGBT issues won’t be voted on.) Within a matter of days, Orthodox leadership figures called Ohana “infected”, his leadership position “unbearable”, his appointment “a trick”. Our new Speaker has made a policy of silence, or at least of “not speaking against the rabbis.” After years of vitriolic mudslinging in the political arena, it’s suddenly very important for everyone to be mamlachti (statesmanlike), especially when it comes to not embarrassing people who spread libelous poison about gays. I was, however, particularly impressed by indicted-for-corruption cum paragon-of-liberal-values MK David Bitan, standing up for his gay colleague and chiding other Likud MK’s for not doing enough to defend Ohana’s honour in the face of these diatribes. MK Bitan, you get a gold star.

Dear MK Bitan, members of the Likud, and concerned public – let me clarify that this is not about Amir Ohana. He does not need defending. You do not need to speak out in his honour. The people whose DO need defending are vulnerable LGBTQ people of all stripes: trans people, closeted Orthodox people, Haredi LGBTQ youth without basic skills who have been utterly rejected by their families and communities, people being treated with antipsychotic drugs because of their sexual/gender identities, people forced to participate in debunked conversion therapies, and many downtrodden and beleaguered others. These are the people who need your protection, dear politicians and public leaders, not MK Ohana who has a beautiful family, a beautiful life, and who tows the party line beautifully while doing precious little for the community he purportedly represents. A brief visit to his Twitter page shows how vocal he is about LGBTQ issues. I have two words: Fig. Leaf.

Perhaps it is my deeply-ingrained sense of entitlement, but I have to admit my sense of betrayal when discovering that many friends and family members (including LGBTQ people!) chose to vote for members of the right-wing bloc in the last elections. I think I wandered around in a daze for a few weeks muttering “..why? … but why?” As an avowed homo tsfonbon (disconnected north-Tel Avivian), I was shocked to eventually learn from a friend-of-a-friend that us gays delude ourselves into thinking that the whole world revolves around us and that other people might not actually base their vote around defending LGBTQ rights. In fact, for most people, gay rights are… *gasp* … a marginal issue. Once I wrapped my head around this, it suddenly made sense to me how a majority (even a large majority) of Israelis might be in favour of LGBTQ people having equal rights, even including civil marriage, yet at the same time would cast votes for a political bloc which includes virulently anti-gay politicians. It’s not about us gays and our hang-ups; apparently, there are other complex issues that people care about more.

As a self-declared champion of liberal values, I am learning what it means to respect others’ right to think (and vote) differently from me, even if I have trouble understanding their considerations. That other standard-bearer of open dialogue, MK Bezalel Smotrich, has repeatedly commented in public that us liberal folks are the real oppressors because we don’t allow room in the conversation for oppressive discourse. He’s so right. But here’s the part where I challenge my many right-voting friends and family, especially those LGTBQ people who made the interesting decision to vote for parties with explicitly anti-gay platforms: take responsibility for your choice. For many in our community, the elections were not about right and left, only-Bibi versus anyone-but-Bibi. They were about our place in this complex society, and about swinging the door wide open for people actively seeking ways to curtail our basic rights. I call on you, my friends, to demonstrate your support for the LGBTQ community by standing up and speaking out against the bigoted, anti-gay tirades we are hearing on a near-daily basis, even if they are coming from “your camp”. Tell the representatives you voted for, that LGBTQ rights are not up for discussion: in the case of Likud voters, that you expect your MKs to actively defend the LGBTQ community and speak out against those within the government who assail them; in the case of voters for the religious parties, that you do not support this aspect of their platform. Be vocal within your communities, talk with others openly about your LGBTQ friends, relatives, and children. Be the allies you claim to be.

Either way, I anticipate that the next few years will see me doing a lot of dramatic sighing, self-righteous eyebrow-raising, and sanctimonious grumbling, interspersed with blog posts which I hope you will find thought-provoking. Some of it will be serious, some of it irreverent. Some of it will be comical, some of it tragic, much of it both. As my wonderful, 97-year-old Holocaust-survivor grandmother has been know to say: If we don’t laugh, we cry.

About the Author
I'm living my simple life as a kippah-wearing, doctor Oleh, who is raising small children in an interracial, same-sex marriage...to an Israeli.