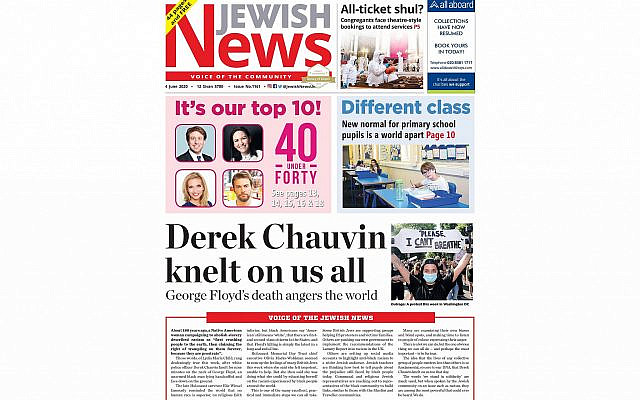 I don’t often feel uncomfortable about the front page of the newspaper I write for – but last week, it jarred with me.

It read: “Derek Chauvin knelt on us all”, referring to the police officer filmed kneeling for nearly nine minutes on the neck of unarmed black man, George Floyd. The footage was sickening, and has led to an eruption of protests, and violent police confrontations.

There was a sharp backlash to last week’s front page, and this was acknowledged by Jewish News’ editor. You can read his response here.

The intention, is of course, noble: to sympathise with black communities in America specifically, and around the world.

But the backlash to his death shed light on how much anger black communities have – that racism against people of colour has for too long been ignored.

This isn’t an issue the British Jewish community understands intimately. Indeed, it’s insulting in some ways to say ‘he knelt on us too’.

We don’t face the same kind of harassment and institutionalised racism from the police. Indeed, every year we get millions of pounds, rightly, to protect us from antisemitism and extremism, our own specific trauma.

The notion that Chauvin ‘knelt on us all’ ignores both the nature of racism faced by black communities in America, and the fact that it’s been ignored and not acted upon for so long.

So no, this isn’t the time to say we, as Jews, the long-suffering victims of racism in Europe, get it, and are part of your struggle.

It’s the time to say, it’s not about us.

But we’ll support your fight, because that’s what minorities do, and we’ll learn about what you’re going through.

Chauvin didn’t kneel on us.

He knelt on someone else, and the reality is, that while the contents of the article was on-point, this headline was another way of saying “All Lives Matter”.

This is the mantra used in recent weeks to downplay the impact of racism against the black community in America.

It’s been the term that attempts to divert attention from the trauma one community faces, and generalise it to say “we all face trauma. We all matter”.

How would you feel, if on Holocaust memorial day, someone said “what about the five million non-Jews who also died?”

But both are clearly intended to take the focus away from a specific trauma.

Nobody said only black lives matter.

That’s why this isn’t about us.

It’s about recognising a particular set of conditions a community faces, which British Jews by-and-large do not understand, even if we sympathise.

About the Author
Jack Mendel is the Online Editor at the Jewish News.
Comments