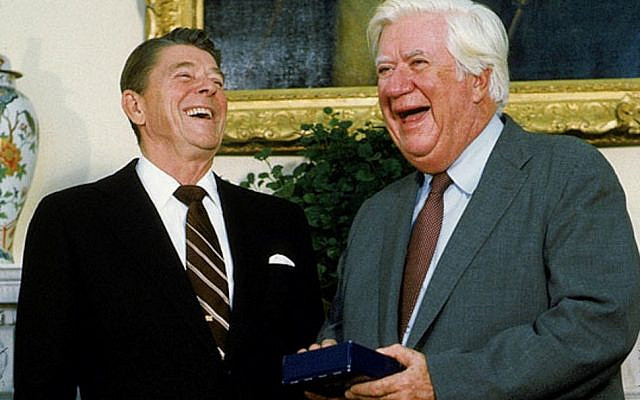 President Reagan and Speaker O'Neill, political opponents who were civil with each other. (DARRYL L. HEIKES)

There are many aspects of the Hanukkah story to celebrate. Like most Jewish festivals, the Hanukkah story begins with persecution and ends with miraculous Divine salvation. It is these two points that we generally focus on during Hanukkah. There are unpleasant aspects of the Hanukkah story that we don’t teach. During the time of the Greek rule over Judea the Jewish people were divided. Many Jews had become attracted to the foreign philosophy of the Greeks and became “Hellenized.” Traditional Jews remained loyal to the age-old teachings of God in the Torah. The divisions between the two groups were sharp, the Jews were a divided community. The division lasted hundreds of years, eventually causing baseless hate among the Jews. This internal hatred brought about the destruction of the second Temple and the exile of the Jewish people.

Disagreements are natural to the Jewish world. Debate is considered healthy and Judaism’s most established Rabbinic work, the Talmud, is a record of thousands of debates. I frequently share my opinions in op-eds, blog posts and on social media. As can be expected not everyone agrees with my opinion. I look forward to the disagreements and constructive criticism. I learn the most from hearing other opinions, especially those critical of my ideas. I’ve noticed a trend over the last four years; Public discourse, especially in the political arena, is anything but civil. We’ve lost our graciousness, become ruder and are full of animosity.

I teach my students that all political discourse, whether it is with people who agree or disagree, must be conducted respectfully. There is no allowance for making an argument personal. One can not offend, question the integrity, or shame others publicly within a debate. A civil debate and disagreement must maintain rules of decorum. In an effort to ensure that interactions with those who disagree critically remain respectful, refuse to be anything but civil in all debates. Ignore all people who respond discourteously. If someone’s responses are particularly egregious – block them. There are three types of comments that should never be honored with a response.

Never respond to a comment that includes an insult. We are taught to respond to insults by singing “Sticks and stones might break my bones, but words will never hurt me,” but words do hurt. God forbade causing pain to others with words because insults can be more damaging than sticks and stones. If someone uses an insult instead of addressing a point or offering an idea, their insults say more about them than those they’re insulting. They don’t deserve a response.

Some people don’t insult – they consider it beneath them; instead they question their opponent’s motives. They claim that those who disagree with them must be acting out of self interest or some agenda. Only they act altruistically with the good of the world as their sole motive. All who disagree with them must, by definition, be acting with less than noble objectives. Questioning motives is a unique passive aggressive way of belittling an opponent. It does not deserve a response.

Lastly, some people are cowards. Instead of directly confronting a person they disagree with, they’ll talk about them publicly, but behind their backs. These people don’t allow their opponents to respond with their point of view or defend the accusations laid against them. Cowards who refuse to challenge their opponents don’t deserve a response.

My friend Arsen Ostrovsky recently quoted Winston Churchill, “I always cheer up immensely if an attack is particularly wounding because I think, well, if they attack one personally, it means they have not a single political argument left.” My dear students, let Churchill’s reflection be your guiding principle. When dealing with those who refuse to be civil in their discourse do not stoop to their level; recognize that you’ve won the debate. Ignore or block them – they are not worth your time. Most importantly, make sure that all of your responses are respectful. Never insult or question your opponent’s motivations. Always have the courage and courtesy to allow them to defend themselves. The most important part of any discussion isn’t what you say, but how you say it.