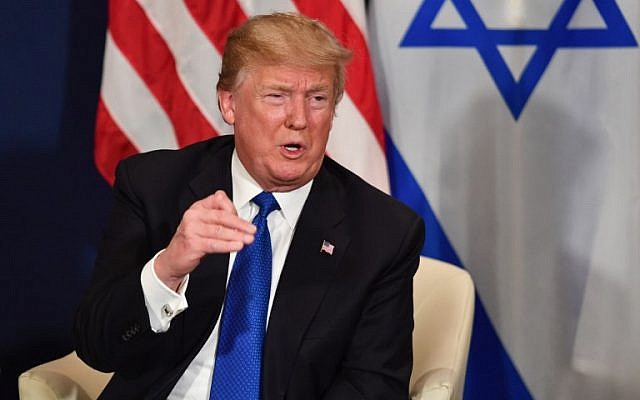 US President Donald Trump is pictured during a bilateral meeting with Israel's Prime Minister on the sidelines of the World Economic Forum (WEF) annual meeting in Davos, eastern Switzerland, on January 25, 2018. / AFP PHOTO / Nicholas Kamm

What qualifies a President as Pro-Israel? What qualifies them as a friend to the Jews? With the passing of President George H.W. Bush these questions have been the subject of many discussions this week. President Bush did many great things for the Jewish people and for the State of Israel. President Bush played an instrumental role in the liberation of Jews from the former Soviet Union, Syria, and Ethiopia. He also created crises in the U.S.-Israel relationship. He advocated for stopping shipments of F-16 fighter jets to Israel after Israel bombed Iraq’s nuclear reactor and wouldn’t grant loan guarantees to Israel without concessions from Israel on settlements. When discussing a President’s relationship to Israel nuance is required. It is too complicated to simply judge a President as Pro or Anti-Israel.

Israeli government officials, from Knesset members to Ministers, have complimented President Trump in a way they never praised American presidents that came before him. In a speech last week at a Government Press Office Summit, Deputy Minister in the Prime Minister’s Office, Ambassador Michael Oren, said the Trump administration is “The friendliest U.S. administration to Israel since 1948.” As Israeli Ambassador to America from 2009-2013 and a historian and expert on the U.S.-Israel relationship, no one is more qualified than Oren to make that judgement.
Not every Jew agrees with the current Israeli government’s policies or is a fan of Prime Minister Netanyahu. When it comes to judging an American president for his support of Israel, the current elected leaders and policies must be separated from the State of Israel, the homeland of the Jewish people. Jews advocate for American support of Israel, not for support of Israel’s leaders.

Many Jews disagree with the position that President Trump’s warm relationship with Israel’s current government should make him a hero to the Jewish people. The President’s critics absurdly accuse President Trump of being an anti-Semite. A less absurd claim is that he is using language that anti-Semites find supportive, and people correctly criticize him for dividing the country. It is absurd to think the President is an anti-Semite because there’s no sign or evidence of him acting in an anti-Semitic fashion. I find his language divisive and many are taking his lead to become more contentious in their dealing with others.

There is no connection between the President’s policies and behavior to the uptick in antisemitism in America. Robert Bowers, the Pittsburgh shooter was a critic of President Trump, and none of the recent anti-Semitic assaults in New York were perpetrated by Trump admirers. There’s no tangible evidence that points to President Trump being directly responsible for antisemitism in America.

President Trump has been the most supportive American President of Israel. There is a long list of his policies and decisions that have advanced Israel’s security. President Trump’s first foreign trip was to Israel, every statement of his has been supportive of Israel, he hasn’t told Israel to stop building in Judea and Samaria, he has spoken in a straightforward manner to President Abbas and the Palestinian Arabs, his upcoming peace plan will not be prescriptive, he has moved the U.S. Embassy from Tel Aviv to Jerusalem, and most importantly, he has withdrawn America from the Iran deal and reinstituted sanctions on Iran.