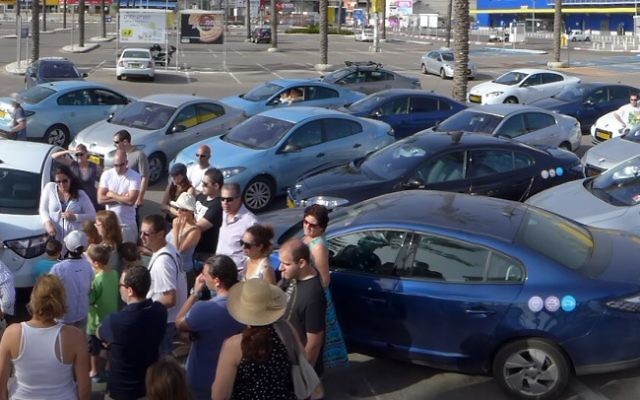 Better Place customers gather in Netanya 25 May 2013 to talk to the press - Photo: Brian of London

I’ve written here at Times of Israel extensively about the Better Place car I own and drive. Today the company filed for bankruptcy. It really is too soon to know everything that went wrong and there will be a lot of speculation.

Customers do not know what it means for them. I had confirmation on Friday afternoon that the company would file for bankruptcy today, Sunday, and that happened while I was driving my car up to Jerusalem. I switched my battery (as usual) and I will drive home tonight.

In the coming days and weeks when we see the financial details the receiver has, we’ll know more.

I’ve written in the Times of Israel how the government of Israel failed to make any use of the massive investment privately made in Israel. For better or worse, Better Place is an emblem of the Startup Nation phenomenon and this failure will cause wider damage. I also have no doubt that many aspects of the execution of Better Place’s business plan were faulty too.

Better Place customers gather in Netanya 25 May 2013 to talk to the press – Photo: Brian of London

What Better Place did deliver was an absolutely stunning customer experience. This is not to be underestimated, but if this is at an uneconomic cost, it can’t go on.

Be wary of speculation from those with distant connections to the company and don’t believe anyone who says this reflects badly on electric cars in general. Electric cars (and battery electric cars especially) remain the world’s best way of kicking the disastrous oil habit and freeing ourselves from OPEC’s tyranny. And that’s before we even consider the health benefits from removal of pollution from our city centres.

If you think putting Israel’s natural gas in cars and buses is the future, just consider this horrific story from Pakistan of 17 children killed when a gas canister in a bus exploded.

Even without switch stations I will be able to use my car just with home charging. There may be occasions I will swap cars with my wife because she never drives 100 km in  a day won’t ever be concerned by the range of the car.

Over the coming days and weeks we’ll see what this means for the various creditors and the customers. I’ve never met a group of customers so committed to a product and so happy with a service. We’re all desperately sad at today’s news.