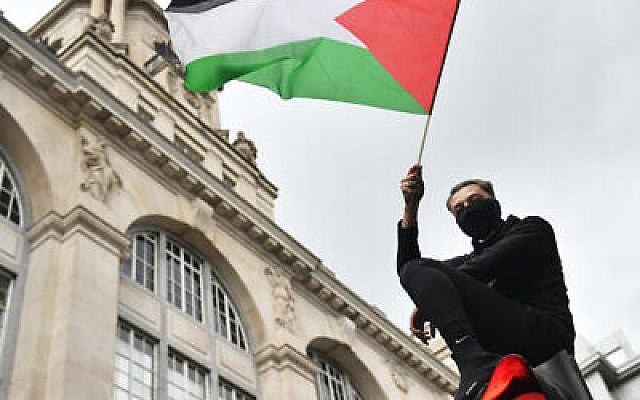 A demonstrator waves a Palestinian flag whilst sat atop a traffic light in London, during a march in solidarity with the people of Palestine amid the ongoing conflict with Israel. Picture date: Saturday May 15, 2021.

It is sometimes difficult to write about an ongoing wrong when there is a live obscenity dominating the headlines.

So, let me say straight up, I stand with the Ukrainian people against Putin’s war.

And while this war has seriously exposed the deficiencies of the collective known as ‘the West’, there’s evidence that we are getting our act together.

But as Putin continues his brutal, illegal and devastating war against Ukraine we shouldn’t be afraid to draw parallels with other conflicts and learn.

In Putin’s war the truth was a casualty before it began.

How many times did Putin tell us that he was not about to attack Ukraine before doing exactly that?

But his subterfuge didn’t succeed because ‘the West’ called him out.

Intelligence on the Russian build up wasn’t absorbed and then secreted away by our security forces.

Every time Putin said: nothing to see here, Ben Wallace or Jens Stoltenberg said: not true, and denied him his fig leaf of justification.

Enormous lies have the potential to hide enormous crimes.

So, as we approach the latest instalment of fiction prepared ‘Putin style’ by the Palestine Solidarity Campaign (PSC) and their comrades in the anti-NATO Stop the War group, it’s well past time to expose the calumny that Israel is an apartheid state.

There is no apartheid in Israel.

People of all creeds and backgrounds are free and Israeli soldiers and police officers exist to protect life, not endanger it.

In the latest democracy index ratings, Israel scored higher than Italy, Spain and the mighty land of the free, the United States of America.

To suggest, therefore, that Israel is an apartheid state is risible but that doesn’t mean that the assertion can be ignored.

Putin’s lies about Ukraine were designed to camouflage a crime and those that promote the fiction of apartheid seek to hide decades of crimes committed against many people, including ordinary Palestinians.

Those crimes were committed by Arab then Palestinian leaders who were: offered a state, refused it, lost all the wars they started, refused to negotiate peace, deliberately denied haven to their own people, manufactured a displaced nation before resorting to blowing up women and children.

And after all these self-inflicted wounds they want to be seen as the victims in the conflict and counter intuitively, as the victors in negotiations!

Like Putin’s war, Israel Apartheid Week is just one more lie, one more piece of camouflage for the failures of Arab and Palestinian leaders.

So why do our politicians fall for this story? It’s probably a mixture of dislike for the Jewish State, ignorance of history and a desire to support the perceived underdog.

However, their failure to remove the blinkers denies the next generation of Palestinians freedom.

Palestinian children are being taught to hate Jewish people, and university students in the United Kingdom are being offered the same menu via Israel Apartheid Week.

A starter, main course and dessert of lies.

But they can’t be allowed to do so under a banner that is untrue and at its core is antisemitic.

That’s why the latest BIA partner campaign will focus attention on the universities across the United Kingdom that have failed to adopt the IHRA definition of antisemitism, and we’ll ask our politicians to remedy this deficit.

To join the campaign, go to www.israelbritain.org.uk.

About the Author
Michael McCann is a former Labour MP and is now Director, Israel Britain Alliance
Comments