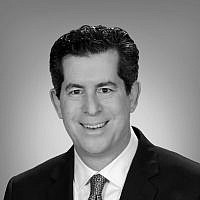 The Blogs
Brian Strauss
Apply for a Blog
Advertisement
Please note that the posts on The Blogs are contributed by third parties. The opinions, facts and any media content in them are presented solely by the authors, and neither The Times of Israel nor its partners assume any responsibility for them. Please contact us in case of abuse. In case of abuse,
Report this post.

This past year should have been the bellwether year for a left-leaning pro-Israel, pro-peace organization to prove its merits and demonstrate its worth.

America was governed by a Democratic administration, House and Senate, and Israel was led by a centrist unity government led by an Obama and Biden favored Prime Minister Yair Lapid. So how did J Street, the self-proclaimed “pro-Israel, pro-peace” organization, seize this unique opportunity?

It lobbied Congress for U.S. investigations into Israel’s military, called on Biden to publicly pressure Lapid during his first official visit – and then panned the visit when Biden didn’t, defended Ben & Jerry’s boycott of Israel despite fierce opposition from the Lapid government, and pushed for adding new political conditions on security assistance to Israel despite wall-to-wall opposition in Israel and the Biden administration.

Politically, the group endorsed four of the mere eight Democrats who voted against emergency supplemental Iron Dome funding, and it spent $100,000 to reelect a congressman who took his name off a bipartisan bill to strengthen the Abraham Accords peace agreements.

If this is what J Street did to promote pro-Israel policies with Democrats in all seats of power, we can reasonably ask, is J Street pro-Israel at all?

Founded 15 years ago as a “pro-Israel, pro-peace” organization with the vision of being the “blocking back” in Washington for advancing a two-state solution, J Street won fans in synagogues and even some congressional offices.

But the organization has changed – and it’s time we face reality about what J Street is and what it is not. Last month, its founder and CEO Jeremy Ben Ami that “J Street is not a two-state solution organization, that’s a mistaken premise.”

Ben Ami went on to tell the Forward that the organization’s goal was now to convey to policymakers that American Jews prioritize other issues above Israel.

It is deliberately deceiving for this organization to still be branded as “pro-Israel, pro-peace,” and the stakes are too high for our community to continue to pretend they are either of those things.

The security challenges facing Israel are growing more severe. Iran is advancing its nuclear program while cozying up to Putin. Terrorism is on the rise in the West Bank and the Palestinian Authority is on the verge of collapse. And the new government in Israel may pursue policies that may inflame tensions with the Diaspora.

Pro-Israel organizations should work to diffuse those challenges – navigating us through these tense and complex times toward an outcome where America and Israel emerge stronger, not weaker — more aligned, not less. Yet recently J Street issued a new policy paper of directives for the Biden administration that would only serve to exacerbate tensions. The kindling is smoking, and J Street is fanning the flames. That’s a recipe for disaster.

The group also recently announced that it had expanded its mission to include “pro-democracy” – a noble cause that I subscribe to as well.

But this mission creep is inherently a message in line with everything else the organization has said and done in the past year: Its original priorities have changed. J Street is not what it used to be, while still trying to convince us it is. While it may still have an important role for many in our community, we do ourselves a disservice if we continue to pretend it’s a pro-Israel organization when its track record says otherwise.

About the Author
Rabbi Brian Strauss became the Senior Rabbi of Congregation Beth Yeshurun on August 1, 2018. He joined the congregation in July 2001. Rabbi Strauss is a graduate of the Zeigler School of Rabbinic Studies in Los Angeles and the University of Texas at Austin. A member of the United Jewish Communities Rabbinic Cabinet and the United Jewish Communities National Young Leadership Cabinet, he has been the recipient of the annual Jewish Federation of Greater Houston Mae & Edmund Hecht Rabbinic Presentation. Rabbi Strauss also served on the Texas State Commission on Holocaust and Genocide. He was selected as the winner in the men’s spiritual leader category in Houston’s city-wide “Gen Next” contest, which recognizes Jewish professionals in their twenties and thirties. He is also a member of the prestigious program Rabbis Without Borders, sponsored by the National Jewish Center for Learning & Leadership (CLAL). He has served on the boards of the Holocaust Museum Houston, the University of Texas Hillel, the Jewish Federation of Greater Houston as well as serving as the president of the Houston Rabbinical Association. He has served as a visiting scholar in residence at the International Kallah of the B’nai B’rith Youth Organization in Starlight, Pennsylvania and other synagogues throughout the region. He is the author of the book, “To Life, To Family, To Me: 6 Keys to a Good Family Life.” He is also a frequent guest speaker at many local schools and churches and has been published in national and local publications. Rabbi Strauss is married to Lisa Shapiro Strauss, a practicing attorney and a previous fellow in the Wexner Heritage Program. They have three children.