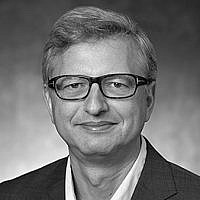 The Blogs
Michael Brenner
Apply for a Blog
Advertisement
Please note that the posts on The Blogs are contributed by third parties. The opinions, facts and any media content in them are presented solely by the authors, and neither The Times of Israel nor its partners assume any responsibility for them. Please contact us in case of abuse. In case of abuse,
Report this post.

This week, when the Likud ministers of the Israeli government proposed a controversial bill that would define Israel as a Jewish state, they might as well have taken down the framed images on the walls behind them in the Likud headquarters. Neither Theodor Herzl nor Vladimir Ze’ev Jabotinsky would have approved of their initiative.

Herzl’s Judenstaat (literally: The State of the Jews) was a vision of a cosmopolitan society, in which Jews would constitute the majority of the population and enjoy full political autonomy, but in which Jewish religion, culture, and symbols played only a minor role. Herzl was interested in creating a model society for all humanity and not just a national state of the Jewish people. He proposed a flag with seven stars for the seven-hour working day, with German, French, and English, rather than Hebrew or Yiddish as official languages. The “Seven-Hour-Land” was to be a laboratory of utopian ideas. Doctors work to find a cure for Malaria, while engineers develop telephone newspapers with spoken advertisements, and women enjoy voting rights unknown anywhere else at the turn of the twentieth century. As he envisioned it, this “New Society” would also spearhead an end to all racial inequalities: “I am not ashamed to say, though I be thought ridiculous, now that I have lived to see the restoration of the Jews I should like to pave the way for the restoration of the Negroes.”

Herzl’s New Society makes “no distinctions between one human being and another. We do not ask to what race or religion a person belongs. If he is a human being, that is enough for us.” In his utopian novel Old New Land, Herzl excludes Jewish fanatics such as the rabbi Dr. Geyer, who sought privileges for Jews over non-Jews, from the New Society. At the same time, he includes the Arab Reshid Bey as well as the Prussian Protestant Kingscourt. The novel’s hero David Littwak proclaims: “You must hold fast to the things that have made us great: to liberality, tolerance, love of mankind. Only then is Zion truly Zion!”

It may come as a surprise to many that Vladimir Ze’ev Jabotinsky, whose image can be found next to Herzl’s in the Likud headquarters, was not that different in his views of a future Jewish state. While his conviction that Jews should be allowed to settle on both sides of the Jordan and his vision of a state with a strong Jewish army are certainly no secrets today, it is less known that all a Jewish state meant for him was a territory in which Jews enjoyed a sufficient degree of sovereignty in their internal and external affairs and in which they constituted a majority.

In The Jewish War Front, his last book before his premature death in 1940, Jabotinsky describes a state that looks much more like a Jewish-Arab Federation than a Jewish nation-state. He begins by writing that it may reassure the world “to learn how not the moderate but precisely the so-called ‘extremist’ wing of Zionism visualizes the constitution of Palestine of the future.” Jabotinsky draws on the draft constitution worked out by the Revisionist Executive in 1934.

In Jabotinsky’s vision of a future Jewish state, the inhabitants not only all enjoy equal individual rights, but both Jews and Arabs share equal collective autonomous rights as well. Jabotinsky writes:

In every Cabinet where the Prime Minister is a Jew, the vice-premiership shall be offered to an Arab, and vice-versa. Proportional sharing by Jews and Arabs both in the charges and in the benefits of the State shall be the rule with regard to Parliamentary elections, civil and military service, and budgetary grants… Both Hebrew and Arabic shall be used with equal legal effect in Parliament, in the schools, and in general before any office or organ of the State… The Jewish and the Arab ethno-communities shall be recognized as autonomous public bodies of equal status before the law… Each ethno-community shall elect its National Diet with the rights to issue ordinances and levy taxes within the limits of its autonomy, and to appoint a national executive responsible before the Diet.

And just like Herzl, Jabotinsky states: “After all, it is from Jewish sources that the world has learned how ‘the stranger within thy gates’ should be treated.”

Neither Herzl nor Jabotinsky lived to see the establishment of the State of Israel but both left their imprint on the future state. Israel was founded as a Jewish state. This is inscribed in its Declaration of Independence, it is symbolically enshrined in its flag and its national anthem, in its official language and its holidays. It is expressed in its Law of Return, which gives every Jew in the world the right to become an Israeli citizen. To go beyond this, and to turn Israel from a Jewish state into a more Jewish state is not only an unnecessary provocation to Israel’s Arab citizens. It also ignores the vision of its founders right underneath their images proudly displayed inside the Likud headquarters.