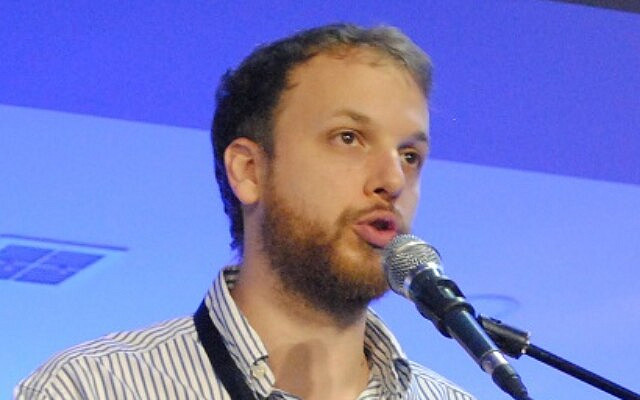 Jack Munayer uses his rights as an Israeli citizen to de-legitimize the Jewish state. 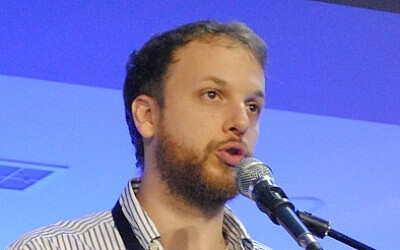 Jack Munayer serving as master of ceremonies at the 2018 Christ at the Checkpoint Conference. (Photo: Dexter Van Zile)

One would think suggesting that the people who defend people from gun and knife attacks are modern-day Christ-killers is bad form, especially in Israel, the (((Jewish))) state.

But Israeli citizen Jack Munayer has a special dispensation.

For him, suggesting that Israeli soldiers are an amalgam of the Jews who sent Jesus to his death and the Roman soldiers who killed him qualifies as “peacemaking.”

You see, Munayer, a Palestinian Christian who lives in Jerusalem, works for the World Council of Churches, an ecumenical Christian organization that has been assisting in the demonization of Israel on a pretty regular basis for the past few decades.

For example, the WCC supports the work of Yusef Daher, a Palestinian Christian who has posted some ugly images on his Facebook page that reveal a troubling hatred of Israel and a tendency to valorize violence against it.

And then there was the time a WCC delegation helped throw Israel to the wolves at the UN Conference on Racism in Durban South Africa in 2001, where Jews were vilified and intimidated. Sadly, the WCC helped make Durban worse for Jews throughout the world.

It did this by playing a central role in the deletion of a paragraph from an “anti-racism” resolution that was affirmed by attendees. The paragraph was intended to put a break on the use of anti-Zionist propaganda as a method of promoting hostility toward Jews.

The paragraph warned against “inaccurate charges of genocide, war crimes against humanity, ethnic cleansing and apartheid.” It described these charges “as a virulent contemporary form of anti-Semitism leading to firebombing of synagogues, armed assaults against Jews.” The delegation from the WCC called for this paragraph to be removed from a resolution before the conference. The delegates followed WCC’s lead, yanked the paragraph from the resolution and the global “running of the Jew” began in earnest after Durban.

Highlighting the connection between anti-Israel propaganda and violence against Jews was too much for the WCC, which has established two bureaucracies that promote exactly the type of anti-Zionist propaganda that was condemned in the deleted paragraph.

One institution is called the Palestine Israel Ecumenical Forum (PIEF), which promotes theological anti-Zionism, in the form of the Kairos Document for example. The other is the Ecumenical Accompaniment Program in Palestine and Israel (EAPPI), which recruits anti-Israel activists to visit the Holy Land and, in some instances, stand in solidarity with members of the PFLP, a terrorist organization responsible for a number of hijackings and the deaths of dozens of Jews.

As luck would have it, Munayer is a “local coordinator” for the EAPPI. He is also heavily involved with the Christ at the Checkpoint (CATC) conferences organized by Bethlehem Bible College which are held every two years in the West Bank.

At these conferences, speakers like Munayer vilify Israel and do everything they can to portray Palestinian leaders as innocent parties to conflict in the Holy Land.

For example, in 2018, Munayer denied the role the Grand Mufti of Jerusalem, Haj Amin Al Husseini, played in the Holocaust in Europe during World War II.  “I don’t accept the premise that the Grand Mufti of Jerusalem helped accelerate [or] encourage the Holocaust in any manner. I don’t think that there are any Palestinians or any serious Holocaust historians that will accept that either.”

Somebody needs to tell Munayer that denial is not a river in Egypt. The Grand Mufti recruited Bosnian Muslims to serve in Hitler’s SS and wrote letters to Nazi officials to stop planned exchanges of Jewish children for German POWs held by the Allies during the war. A German official testified before the judges at Nuremberg that “The Mufti was an accomplished foe of the Jews and did not conceal that he would love to see all of them liquidated.” That qualifies as encouragement, for sure.

By working for the WCC and helping to organize CATC conferences, Munayer is not trying to reform or improve Israeli policies regarding the Palestinians, but to delegitimize the very state that allows him the freedom to do so. The fact that the Israeli government allows this behavior to proceed unchallenged demonstrates its commitment to the rule of law and the rights of its citizens.

Late on Saturday, June 13, 2020, Munayer exercised his right as an Israeli to delegitimize the very state of which he is a citizen by participating in a CATC webinar that condemned potential Israeli plans to extend its sovereignty into the West Bank.

In the webinar, which was broadcast from various cities in the Holy Land, Munayer portrayed the extension of Israeli sovereignty into the West Bank as a very bad thing but failed to provide any Palestinian actions that might have prompted Israel to give up trying to negotiate with the Palestinians and determine their borders once and for all.

The Israelis put forth an offer at Camp David in 2000 and Arafat said no without making a counteroffer; Israel accepted the Clinton Parameters several months later and again the Palestinians said no. And Mahmoud Abbas admits he rejected Ehud Olmert’s peace offer in 2008.

Condemning Israeli policy without providing crucial context doesn’t necessarily undermine the legitimacy of the Jewish state, but Munayer’s one-sided narrative took a hard turn toward demonization when he invoked the killing of Iyad Halak on May 30, 2020.

Halak was killed by Israeli police in East Jerusalem after he failed to follow instructions (which he did not understand) to stop. Munayer told his viewers that Halak was killed five days after George Floyd died at the hands of the police in Minneapolis.

“Iyad had special needs,” Munayer reported. “He had autism. His mother described him as having the mind of a four-year-old. He had to be walked to his special needs school where he worked as a caregiver, because he was often afraid of soldiers and police.”

Reports indicate that the police who shot him mistook his cellphone for a gun. Anyone who wants to sit in judgement of the officers involved needs to know that there was an attempted car ramming in the West Bank the day before and that Jerusalem has been the scene of numerous attacks against police and civilians over the years.

Iyad Halak’s death is a tragedy and the Israeli government is conducting an investigation into it (a fact Munayer omitted in his lurid account).

“Iyad was killed literally opposite my office where I work and it was so sad to see such an innocent person who probably walked by every day could be killed without any sense of justice and recognition of his suffering.”

After linking Israel to the death of George Floyd in Minneapolis by reporting that many U.S. law enforcement officers are trained in Israel and declaring that they use the same weapons, the same tear gas, and are afflicted with the same systemic racism, Munayer reported that Halak was killed “not 200 meters away from the first station of the cross [on Jerusalem’s Via Dolorosa] where Jesus was condemned to die.”

This unhappy, but convenient, coincidence prompted Munayer to adapt a prayer about Jesus’s death in Jerusalem to the circumstances surrounding Halek’s death. And wouldn’t you know, Israeli soldiers are implicitly portrayed playing the same role the Roman soldiers (and the evil Jews) played in Christ’s passion.

“You stand condemned to death by an occupying soldier,” Munayer said, “just as it was 2,000 years ago. You are a victim of false accusations, just as it was two years ago.” Munayer’s prayer continues:

Your death was framed in the superiority and domination of one people over another, just as it was 2,000 years ago.

No one is able to defend you as you stand alone, just as it was 2,000 years ago.

You devoted your time to help the disadvantaged, caring for those who were ignored by others, just as it was 2,000 years ago.

The powers that be refuse to take responsibility for their injustice, just was it was 2,000 years ago.

For some reason, Munayer forgot to include a reference to Matthew 27:25 (“His blood be upon us and our children”).

With his prayer Munayer is basing a cult of devotion on the death of Halek. But this devotion does not emphasize the Christ-like goodness and innocence of Halek, who died tragically, but the evil of the Jews who brought about his death.

Did Munayer ever think that the officers involved in his death were afraid for their lives? Did he ever think that this fear might be rooted in the 2015 stabbing attacks in Jerusalem — which received little criticism from Christian peacemakers — despite having cost numerous Jews their lives?

And does Munayer have anything to say to Muslim Palestinians who after Halek’s tragic death chanted “Khaybar, Khaybar, O Jews, Mohammad’s army has began to return,” a reference to a massacre of Jews that took place at the hands of Muhammad’s army in the seventh century? Would it ever occur to him to invoke the Massacre of the Innocents (Matthew 2:16–18) to “frame” or “interpret” the murder of young Israeli children at the hands of Palestinian terrorists in the West Bank?

Of course not. Because for all his talk about peacemaking, Munayer is not interested in promoting peace and reconciliation. He is interested in using his rights as an Israeli citizen and deploying his status as a Palestinian Christian to demonize the men and women who keep him and his Jewish neighbors safe from terror attacks perpetrated by his fellow Palestinians who, by the way, regard Haj Amin Al Husseini as a hero.