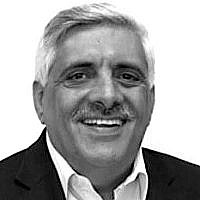 The Blogs
Daoud Kuttab
Apply for a Blog
Please note that the posts on The Blogs are contributed by third parties. The opinions, facts and any media content in them are presented solely by the authors, and neither The Times of Israel nor its partners assume any responsibility for them. Please contact us in case of abuse. In case of abuse,
Report this post. 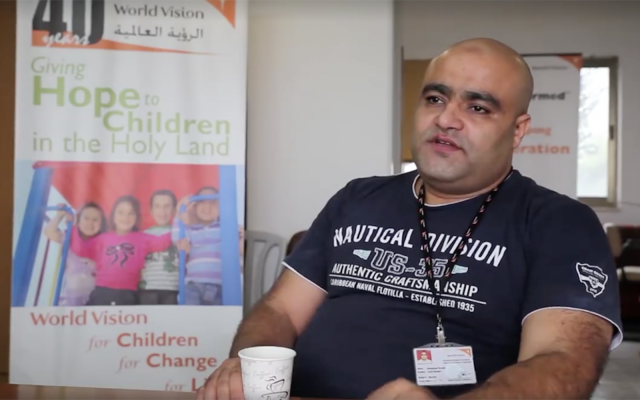 Muhammad el-Halabi, a manager of the World Vision charity's operations in the Gaza Strip, was indicted on August 4, 2016, for diverting the charity's funds to the terrorist organization. (Screen capture: World Vision)

I don’t know why the case of Mohammad el-Halabi has such a powerful hold on me. Maybe it’s the gravity of Israel’s claims that the Gazan aid official transferred $50 million to Hamas or the paucity of the evidence. It might be the plea offers made soon after his arrest in June 2016, or the continuation of his detention without trial for five long years.

El-Halabi, who headed the humanitarian organization World Vision, was arrested in June 2016 on his return from a work meeting in Jerusalem. He was held for fifty days without access to a lawyer, and his family says he suffered major hearing loss during the interrogations. Israeli media reported that he is charged with funneling $50 million worth of products including steel beams to Palestinian military groups. He denies the charge and has maintained his innocence in every one of his 165 court appearances over the 5 years.

Halabi and his lawyer say he was offered his freedom from year one if he agreed to a lesser charge but he refuses, insisting on his innocence. He and his lawyer maintain the case is being dragged out to force him to accept a plea and avoid a trial that will reveal the prosecution’s lack of evidence.

Investigations by the American organization and the Australian government, which donated the money, have turned up no proof of any wrongdoing. World Vision had given him limited powers of signing checks and the Gaza office’s ceiling of approval was just $15,000. They also say they have never used the Kerem Shalom entry. World Vision has stood by their staff saying the entire budget of the humanitarian organization was much less than what he is accused of.

Israeli prosecutors claim he made a confession to a fellow inmate planted by Israel although they have been unable to present an original document of the confession. The defense lawyer says Israeli forensic experts have testified that the photocopy presented to the court has serious authenticity problems. Most Palestinians accept a plea deal but el-Halabi has stubbornly refused, insisting he will not agree to a false confession. Israel’s record of convictions is over 99% almost all based on confessions and plea deals.

I often imagine myself interviewing those behind this case and as a result. I rehearse it in my mind, just in case I’m ever allowed to interview the Israeli prosecutor. The conversation is imaginary, but it is based on real available information on the case:

Me: Why are you still holding Mohammad el-Halabi after five long years?

Prosecutor: He is charged with serious crimes.

Me: Do you really believe that he committed those crimes?

Me: If they are so serious and you are convinced of them, why have you offered so many plea deals that would El-Halabi go free in return for confessing to a lesser crime?

Prosecutor: For his own good and to save the court time and money.

Me: But that would have let him off scot-free despite the serious crimes you say he committed.

Prosecutor: Yes, I suppose you are right

Me: In your view, what is the most serious thing Mohammad did?

Prosecutor: He gamed the system, he used humanitarian aid to help terrorists

Me: But specifically what did he do?

Prosecutor: For example, he imported steel for humanitarian use and gave it to Hamas to build tunnels and to make rockets.

Me: And the beams came via Erez checkpoint?

Prosecutor: No, they came through Kerem Shalom.

Me: Are you sure?

Me: And who is in charge of the Kerem Shalom checkpoint?

Me: So, the state of Israel has copies of the transactions since they came through an entry that is controlled by the Israeli army.

Me: That is strange because World Vision told me they have never used Kerem Shalom at all.

Prosecutor: World Vision is lying. el-Halabi signed a contract and imported them on claims they were going for humanitarian cases

Me: You know this because you raided the World Vision office in Jerusalem and confiscated all their documents?

Prosecutor: We have our ways.

Me: But surely the trove of documents that you got from World Vision, on the morning of July 12th, 2016 helped you seal the case against el-Halabi?

Prosecutor: Not exactly. You see there were a lot of files and we didn’t have the time or manpower to search all the material.

Me: But still you are sure that el-Halabi and World Vision imported steel beams to Gaza.

Me: So why did you not produce that evidence in court?

Prosecutor: There was a lot of secret evidence that I can’t discuss

Me: So you know the size and dates of the steel materials that were imported?

Me: In general, I thought in court you have to be precise: On such and such date such number of steel beams weighing so much were imported to such and such organization.

Prosecutor: We don’t have those specific details.

Me: You say that you have a confession from Mohammad el-Halabi.

Me: So why was the original copy of this so-called confession never presented to the court?

Prosecutor: It was lost.

Me: You lost the very document that you based your entire case on?

Prosecutor: The original was lost yes.

Me: So you are accusing a man and have held him for five years based on an alleged confession that you can’t even present in its original form to the court.

Prosecutor: Sometimes it happens, but we have a copy.

Me: Ok, on another issue, are you aware that the Israeli government has allowed money to go to Hamas?

Me: The Netanyahu government and Bennett administration both agree to allow the transfer to Hamas of millions of dollars worth of Qatari cash.

Prosecutor: Yes, that is true but the money is to pay salaries

Me: And you know that all the money goes exactly for that?

Prosecutor: This is not my responsibility.

Me: What about the issue of the fungibility of money?

Prosecutor: What do you mean?

Me: It means that if Hamas gets money for salaries this allows it to use money that would have gone to salaries for other purposes. It is as if you gave Hamas money to develop rockets.

Prosecutor: That is absurd. Why would do that? We made money available in order to keep Gaza quiet and peaceful so that our people in southern Israel can sleep without running to the shelters.

Me: And isn’t that what Mohammad el-Halabi was doing by providing humanitarian aid to the people of Gaza?

Prosecutor: Our government needed to pressure Hamas and Halabi was providing them with relief

Me: But you haven’t proved that and he has stubbornly refused to plea. He could have been free from year one yet but he stayed in jail for five years because he is certain he is innocent

Prosecutor: He is stupid.

Me: Maybe, but why would he refuse to make a plea if he actually did what you accuse him of?

Me: I have a plea offer for you and for the state of Israel.

Prosecutor: Mohammad is willing to make a plea offer?

Me: Yes, but not what you think?

Prosecutor: What is the offer?

Me: You withdraw your case against him, allow him to return to his humanitarian work in Gaza with his organization and, in return, he and his family and lawyer will commit not to speak to the press and embarrass you and your government for falsely accusing him and keeping him in jail for 5 long years.

Prosecutor: And what is the guarantee he will be silent when he will be back in Gaza?

Me: Simple, he is committed to humanitarian work. That is why he refused to plea so that humanitarian NGOs and in the end his people are not hurt by an admission of guilt even if it was false. You control which agencies work in Gaza by means of allowing them in and out of Gaza. If he breaks the deal you can stop whatever humanitarian agency he works for. In the end, you have lots of ways to ensure he will abide by his own offer. There you have it – a plea offer that lets you and the judges live with without convicting an innocent man, and all without losing a case.

>Prosecutor: I prefer to let the judge or the government decide. I am doing my job as directed by my superiors.

Me: Will you please pass this plea offer to them?

About the Author
Daoud Kuttab is an award-winning Palestinian journalist and former Ferris Professor of Journalism at Princeton University.
Comments