The Presidents, Prime Ministers, and Princes have flown out of Ben Gurion Airport after attending Israel’s 5th World Holocaust Forum. The events were impressive and the speakers eloquent. I wait with hope to measure the success of Israel’s massive effort to steer the ship of peace into a safe harbor for the Jewish state. In the meantime, I agree with a famous quote which will “tell all” about the speeches, the promises, and especially the exposure to Yad Vashem and the programming. Winston Churchill sagely quoted, “I no longer listen to what people say. I just watch what they do.”

On January 27-International Holocaust Remembrance Day-an opportunity is available to the public for exposure to one of Israel’s most sobering and significant events in the Jewish state. An international audience can view Israel’s State Ceremony by tuning in to “A Nation Remembers.” The international broadcast version of the Official State Ceremony of Israel for the Heroes and the Martyrs of the Holocaust is filmed each year at Yad Vashem. The program is available on-line at www.anationremembers.org

“A Nation Remembers” is broadcast in Finland, United Kingdom, Germany, Canada, USA, India, Indonesia, and Taiwan which transmits into China. Correspondence also comes in from 90 other media and civic organizations as far away as Australia and Argentina. The first program was filmed at Yad Vashem in 2012 and broadcast in 2013. It’s estimated that millions worldwide view “A Nation Remembers” who would otherwise not see the ceremony. But how did “A Nation Remembers” come into existence? Why the delay of around 8 months each year? Who funds this important now-annual message to the world?

In 2011, the Christian Desk at Yad Vashem (co-created with the International Christian Embassy Jerusalem in 2006) invited a small group of Christian leaders and pastors as VIPs to attend the Official Yom HaShoah Ceremony at Yad Vashem. They were part of the AIPAC-affiliated American Israel Education Foundation (AIEF) group visiting Israel at the time. Rev. Mark Jenkins, Executive Producer of Words of Victory Ministries out of Richmond, Virginia, was a member of the 15-person group. As the heart-rending program unfolded with compelling stories of heroism and survival, an idea began forming in his mind; one that he views as prompted by God. “It occurred to me that if I could attend the state ceremony each year with our equipment to film the ceremony, we could use our facilities back home to produce it.” Words of Victory itself has a history, first aired in 1952 and is the oldest Christian TV bible broadcast of its kind in the USA.

With the idea fully formed, Rev. Jenkins approached Yad Vashem’s International Division Managing Director, Shaya Ben Yehuda, saying, “This program needs to be seen by the whole world.” Yad Vashem embraced the project viewing it as a valuable tool to educate a broad spectrum of world citizens; another important and inspiring collaboration between the Jewish and Christian communities. Jenkins returned in 2012 for the first filming and the ceremony was first broadcast in 2013. From filming to release takes about 8 months due to the extensive production time frame. All the costs are absorbed by the Christian ministry as a mitzvah to the Jewish community.

Rev. Jenkins explains some of the process. “First, I had to find an expert in the Hebrew language to translate the ceremony, then edit and compress the ceremony into 59:30 minutes. Now it’s captioned not only in English but in Spanish subtitles.” Jenkins also uses crews to record segments for the international presentations including translations and format changes for various broadcasters. “A Nation Remembers” has grown every year since then not only with its TV broadcast partners, but local-originated and syndicated radio programs and networks who help promote the program on television networks such as National Religious Broadcasters television (NRBTV). Words of Victory ministries is the funding source through its Israel Initiative. 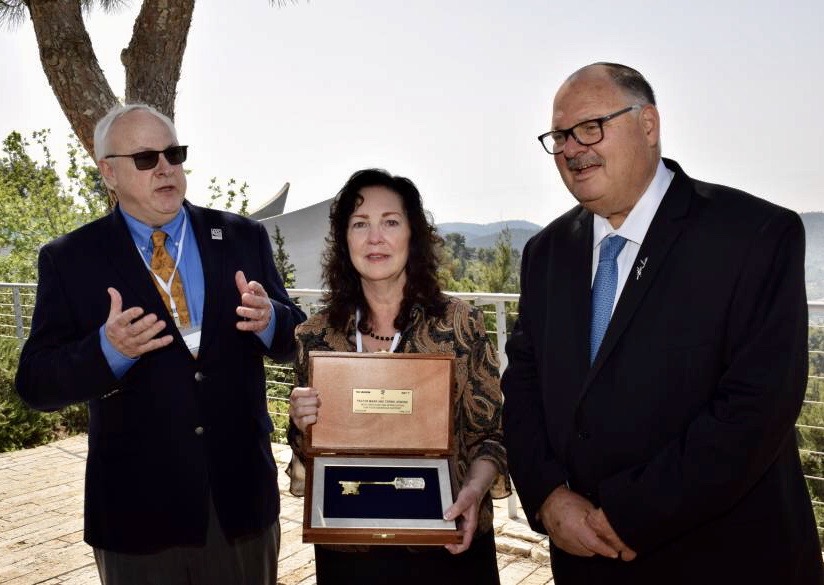 Jenkins’ visit to Yad Vashem in 2011 was a first, but he was not a newcomer to Israel. He and his wife Terrie, a dedicated duo, began leading Israel tours in the 1990s. They made travel logs of Israel which became the most popular segments on the Words of Victory program. Mark explains, “When we took a large tour group to Israel in 2008 for their 60th anniversary, it changed the direction of our ministry. We came to realize that we must maintain a sustained work in Israel. That change came into focus when I was invited on the AIEF trip in 2011.”

Mark vividly recalls a comment he’ll never forget in a conversation with one of their hosts on the way to the Mount of Remembrance in 2011. “You can’t understand Israel without understanding the Holocaust. It’s in the consciousness of the Jewish people and drives our desire to have our own homeland with defensible borders. It’s relying on our own abilities, not other nations for security.”

During the last seven years of filming and producing “A Nation Remembers” Mark and Terrie have sought to understand the Holocaust as best they can, as Christians, as outsiders, as Christians who want to help reverse anti-Semitism. Mark emphasizes, “There are lessons in the Holocaust we must never forget, especially these days as we see the rise of antisemitism.”