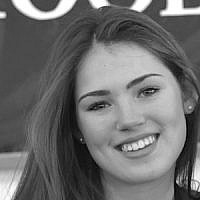 The Blogs
Anna Kuritzkes
Apply for a Blog
Advertisement
Please note that the posts on The Blogs are contributed by third parties. The opinions, facts and any media content in them are presented solely by the authors, and neither The Times of Israel nor its partners assume any responsibility for them. Please contact us in case of abuse. In case of abuse,
Report this post.

In the midst of the current political maelstrom, American Jews have haphazardly found themselves with a new face for their community, a figure who is at best, naïve and utterly inexperienced, and at worst, manifestly corrupt: Jared Kushner.

It is difficult to understand why someone raised Jewish would willingly serve a president who has repeatedly, and unconstitutionally, attempted to keep marginalized populations from war-torn countries from seeking refuge in the United States, work alongside known racists, chief strategist Steve Bannon and Attorney General Jeff Sessions, and assist in furthering a devastating white-nationalist agenda fundamentally at odds with the tenants of Judaism. Kushner has been painted as a moderating influence in this administration, yet his influence has not slowed the steady progression of Trump’s policies, including but not limited to his travel ban, a planned repeal of the Affordable Care Act, which threatens the healthcare of over 25 million Americans, the decision to renege on the Paris climate agreement, and the firing of the FBI director.

Six months into the Trump presidency, Kushner’s achievements are largely nonexistent, but his failures are making headlines. Kushner is now a focus of the FBI’s Russia investigation because he met with a US-sanctioned Russian banker with clear ties to Russian intelligence during the presidential transition.

Whether he is aware of it or not, Kushner is fighting a losing battle — not just for centrist policies, if he is even fighting for them, but for American Jews. I cannot excuse Kushner for his decision to serve in the Trump Administration, nor for many failures in his role as an advisor, and it is not my intention to do so. But his downfall will not come without consequences for the American Jewish community.

House Speaker Paul Ryan blamed President Trump’s dalliance with obstruction of justice in the Russia investigation on naïveté. Right-wing news sources accepted this excuse for Trump, but I doubt that they would award Kushner the same benefit of the doubt. Breitbart News, which was formerly run by chief strategist Bannon, has run headlines with slurs such as “renegade Jew.” Bannon himself has called Kushner a “globalist,” a diminutive derived from the alt-right insult “Jewish globalist.” When Kushner rose above Bannon in the hierarchy of Trump’s inner circle, alt-right pundits claimed that Trump was being “held hostage by vicious Jews” and called for Kushner to be fired. If — when — Kushner steps over the line, the alt-right may charge he is corrupt not because of personal greed, inexperience, or malice, but because he is Jewish.

Kushner is already on a precipice — an outsider with hubris that rivals Icarus’ in an administration embroiled in a new scandal seemingly every day. It is only a matter of time before he falls over the edge, and with Trump in office and the support of the alt-right behind him, an avalanche of anti-Semitism is more than likely to follow.

About the Author
Anna Kuritzkes is a rising sophomore at Harvard College and an editorial and news editor for the Harvard Crimson.
Comments