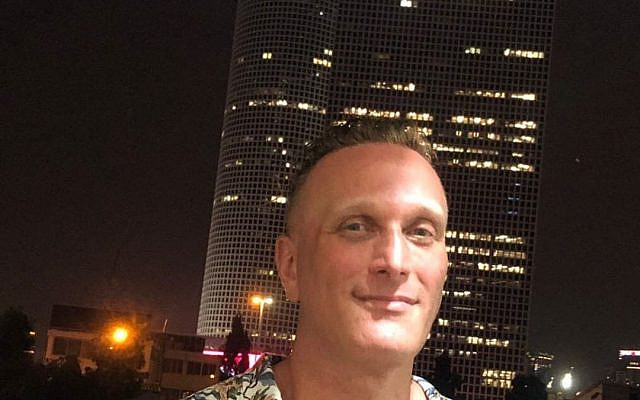 Javo Rocha is an actor, teacher and theatre director. He directed 10 plays, his last two in Buenos Aires (“Amigos Íntimos” and “Carrera Demente”). Between 2001 and 2012 he performed approximately 700 different shows with his students as Muestras in different theatres for the closing of his courses.

The renowned XXIII Magazine wrote a two-page article on him in October 2004, calling him “the youngest and most relevant teacher for his age”. He simultaneously managed 200 students between his Three Years Private Studio and teaching classes at the Teatro El Vitral, as well as continuing to give courses at the CCGSM and the Centro Cultural Rojas. From 2007 to 2009 he gave the “Javolandia” Awards.

David A. Rosenthal: What is your real name and where do you come from?

Javo Rocha: My name is Javier Leonardo Mondschain Dargoltz Sayevich Rosemberg, I am the son of immigrants from Russia and Eastern Europe who settled in Argentina because of the Jewish persecution of the time.

D.A.R.: So where does Javo Rocha come from?

J.R.: I chose Javo as my stage name, because there are many Javier’s and then I didn’t know how to surname myself, as my surname was difficult and people got confused, so in 1996 I took the opportunity to tell the maestro Enrique Alejandro Pinti, who recently passed away in March of this year. Pinti was one of the first Argentine actors, also a comedian, theatre director, writer and playwright. And he was the one who gave me my surname, he told me you’re going to be called Javo Rocha and that’s how it stayed. I remember that day I called my mother at 3 a.m. excited to tell her the good news and when I told her: “Hi, mum, my name is Javo Rocha”, she answered me saying: “You’re crazy!

D.A.R.: How did Javo Rocha come to the world of theatre?

J.R.: I started doing theatre in Santiago del Estero, which is my city. I did theatre in the inter-school competitions at school and I always won best actor in those competitions. When I finished high school, I went to Tucumán, another Argentinian province, and there I started studying theatre at university. Also at that time, I became the theatre teacher at the Kehilá of Tucumán from where I was summoned.

As a theatre teacher at the Kehila, I directed plays on Jewish themes, such as one called “The State of Israel is born”, another about Hanuka, Purim, etc., and among these, the “Diary of Anne Frank” at the Alberdi Theatre, and for this play, when I was 19 years old, I was awarded the “Iris Marga prize” for the youngest director in the country.

In the cinema, I did castings, commercials and in 2001 I co-starred in a film with several famous actors called “contraluz” by Bebe Kamin (Bernardo Czemerinsky), who himself directed a cult film in Argentina called “los chicos de la guerra” about the Falklands war.

I am an actor, before being a theatre teacher and director, and I really want to go back to acting. I haven’t acted for 12 years. Although there are about 100 famous actors who have passed through my classes or children of famous people.

D.A.R.: What motivated you to do Aliyah?

It all started in 2020 when in March the compulsory quarantine was declared in Argentina due to the Coronavirus, then the in-person theatre was closed and I ended up reinventing myself and adapting my classes to the virtual world and teaching them through Zoom.

In August I was in my flat in Buenos Aires in the middle of quarantine, I had nightmares, I had to get up and I went to my terrace and I looked at the sky and I said mum, dad I’m going to Israel, I’m going to Aliyah, I’m going with my brothers who live in Israel. So, I’m going back to the land of my ancestors.

I made Aliyah leaving all the life I had in Argentina as so many Argentinean Jews decided to do, because the inflation, the insecurity, the corruption and also the long quarantine that was the longest in the world, leave no room for quality of life.

So, I took this decision to move to Israel, leaving behind my flat, my position in Aptra, which is the Association of Argentinean Television and Radio Journalists and is the organisation that brings together press workers in Argentinean television and radio, which is known for its annual Martín Fierro Awards for television and radio production. So, I was the director of this theatre school since 2018 and I worked as a teacher there for professional students.

Also, since 1996 I was based in Buenos Aires, as I am from a province called Santiago del Estero. I am now 46 years old, it was now or never. I’m still young and I have the maturity that comes from experience and a young spirit.

D.A.R.: What is the reality in Argentina?

J.R.: I got tired of inflation, because every year I had to raise the fees for my classes, which made studying theatre more and more elitist. So I had to give out more and more scholarships because the students couldn’t afford to pay, and on top of that, I couldn’t lose my students in that amount.

Nevertheless, for years, for two decades, I filled theatres, especially the Vitral, where I presented my theatre shows. But then there started to be fewer people going to the performances. To the point of having half the theatre full and the other half empty. And, with each passing year, I had to raise the price of the tickets because inflation forced me to do so. In 2018 and 2019, I no longer had to raise the fee per year, but twice a year.

I was also assaulted by two men on a motorbike, “motochorros”, and they put a gun to my head and stole my mobile phone, so insecurity was another reason why I decided to leave Argentina.

D.A.R.: What is your impression of Israel?

J.R.: I had come in 2016 with my parents when they were still alive, we came for a month in February and I visited different cities, and that’s when I fell in love with Tel Aviv.

Then Tel Aviv became my city. Although now I go all over the country giving my theatre classes. In Argentina, on the other hand, my theatre classes were ten minutes away from my house. Before it was a more comfortable life than it is now, because here it takes me half a day to go to each theatre class.

I live in the traditional Allenby Street in Tel Aviv, I chose it because it is close to the beach, the Shuk, the Tajana Ha’Haganah (central station) and it is in the centre of the city.

J.R.: It’s not easy. They lie to you if they tell you that making Aliyah is going to make life rosy. Making Aliyah is very difficult, there is a part that they don’t tell you, that here you come to work like a beast, because there are places where they open doors for you and others where they close them.

For example, I go to Hispanic institutions and it’s not like they come in with a red carpet and say Javo Rocha has arrived, nothing like that. I had to break down doors to be allowed to offer my classes. And then I have to break more doors to get people to come to my classes. Also, the Spanish-speaking public seeks to do theatre as a hobby, to take a break from the exhausting work routine that exists, and that’s when they allow it. Also, there are many people who love Spanish here in Israel, Israelis who know Spanish, because of the Argentinian and Latin soap operas.

D.A.R.: How is your process of adapting to Israeli culture?

J.R.: I’m not a good student. I’ve had a hard time with the language. I haven’t been able to study the language because I have to work and I always do it in Spanish. However, I work in a hotel by the beach in the city centre in the mornings as a “dishwasher” in the hotel restaurant. This is something I have never done before, but it is very well regarded in Israel and it is a job I am doing until I am able to position myself here with my profession.