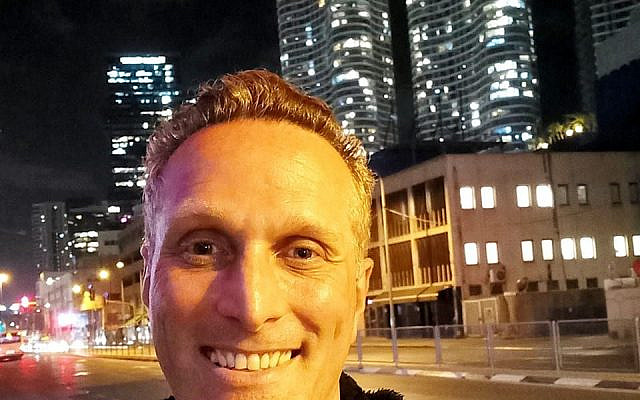 Javo Rocha is an actor, teacher and theatre director. He directed 10 plays, his last two in Buenos Aires (“Amigos Íntimos” and “Carrera Demente”). Between 2001 and 2012 he performed approximately 700 different shows with his students as Muestras in different theatres for the closing of his courses.

The renowned XXIII Magazine wrote a two-page article on him in October 2004, calling him “the youngest and most relevant teacher for his age”. He simultaneously managed 200 students between his Three Years Private Studio and teaching classes at the Teatro El Vitral, as well as continuing to give courses at the CCGSM and the Centro Cultural Rojas. From 2007 to 2009 he gave the “Javolandia” Awards.

David A. Rosenthal: What was the first thing you did when you arrived in Israel?
Javo Rocha: As soon as I arrived I recorded some short videos with the help of my Hebrew morah in Buenos Aires, which I uploaded to Instagram which I called “half an aubergine” hetzi hatzil (חצי חציל). All this when I had barely arrived with all the enthusiasm and euphoria of the newcomer that I began to study the phonetics of Hebrew and to approach this new language for me.

D.A.R.: How was your Aliyah process and how did Israel receive you?

J.R.: Israel should be more prepared to receive people with certain talents, and I’m talking about the Jewish Agency in particular. They have to know this and know how to give them their place when they arrive. Before coming to Israel, I asked my advisor or shaliach to talk to the marketing director of the Sojnut in Argentina, to see if they would help me to promote my work, but they weren’t interested. And then when I arrived, I contacted a high-ranking member of the Sojnut in Israel to help me with the things I needed and they told me that they couldn’t help me with anything.

It’s good that I had to start from the bottom, but I have been drying dishes in the restaurant of the hotel by the beach in Tel Aviv where I work for more than months now. So I ask myself, how much longer do I have to be drying dishes, despite the career I have in my profession?

D.A.R.: What is your relationship with Israel and Judaism?

J.R.: My father was president of the Jewish community of Santiago del Estero, which is a very small community, but we held activities every 15 days when the madrichim came from Tucumán.

I don’t eat kosher, I don’t keep Shabbat or celebrate the traditions, but I live in Tel Aviv and I want to make my life in Israel. And, once a week, I am from every Israeli city where I go to teach my classes.

D.A.R.: Who has helped you in Israel?

J.R.: The first press release I got in Hebrew in an Israeli media reached an Israeli actor, Doron Zafrir, who has been an angel for me. He contacted me on Facebook and invited me for a coffee and that’s when our friendship began.

He introduced me to the artistic director of Nissan Nativ in Tel Aviv where I would like to give a course there translated in Hebrew with translator Isaac Chocron, who is a young actor and director graduated from the same theatre school. Doron also introduced me to Shir Goldberg, director of the main theatre in Ber Sheva.

D.A.R.: What is your theatrical proposal in Israel?

J.R.: I come to bring my personal way and style, with the techniques of Strasberg and Morris, and I want to give my courses translated into Hebrew. I know that it will take me even years to learn Hebrew, but I don’t want to wait so long for the Israeli public to get to know me. I don’t want to be left alone with Spanish speakers.

D.A.R.: How do you find the theatre in Israel?

J.R.: It’s aesthetically very beautiful, visually beautiful. There is a lot of notion of the avant-garde.

D.A.R.: What do your friends in Argentina say about your Aliyah?

J.R.: They were surprised by my decision and even people who didn’t like me said hello. I think that you value what you have until you lose it and not when you have it, so they write to me that your absence is noticeable. I’m used to the change of people, because the cast of the theatre is always changing. I’m trained for that detachment, to move with different people. Although I still don’t have my group of friends in Tel Aviv.

I must have sablanut (סבלנות) which means patience and go leat leat (לאט לאט), i.e. step by step. These are the two words I use the most from the Hebrew. So, patience to have the strength to go through the bad times and know that better times will come later, just like so many who have come and succeeded. I came alone with no family, I am not married. Hopefully I will find the love of my life. I also hope to reach the Israeli public and that they love me and recognise me as the new and exotic theatre director who speaks Spanish. I want to be a reference for the Spanish language.

D.A.R.: What message do you have for Latin American and Israeli audiences?

J.R.: Here there are many olim from all over the world who are doctors and come to clean floors. Very prepared people who have to wait years to practice their profession and be successful.

I would like to ask Israel that when a specific talent comes here who is recognised in their country of origin, to open the doors more clearly and help them to connect with their environment in Israel.