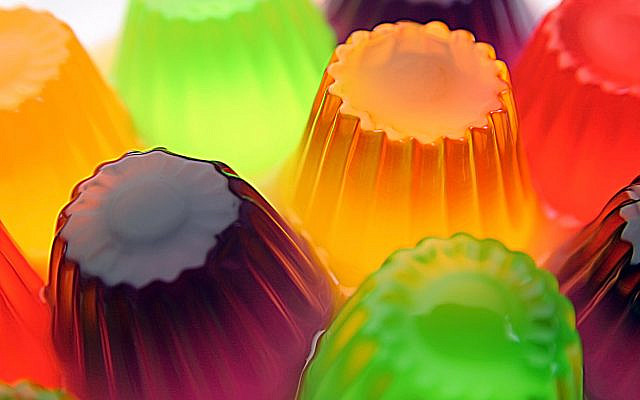 When I was a kid, we knew the day of the week by the TV shows that were on. My favorite night was Tuesday, because my Mother played canasta, and I watched TV with my Dad. We loved watching comedy shows together, and Tuesday had Jack Benny and Red Skelton. From 1962-64, the Jack Benny sow was sponsored by General Foods, who made Jell-O. So, Jack Benny (ne Benjamin Kubelski, son of Mayer and Naomi) began every show by striding onto the stage, arms swinging, and greeting the audience, ‘Jell-O, Again!’

So, as I started keeping Kosher, Jell-O was a no-brainer. Right? Well, not really.

About a century ago, Jell-O burst onto the market as a wonderful desert. One of its first ad campaigns was in Yiddish, and they’ve maintained that they’re kosher ever since.

Right there on the label was a letter ‘k’, which stood for Kosher. Here’s the rub: As opposed to OU or OK, the letter ‘k’ can’t be trademarked, and, therefore doesn’t really mean anything. Many states have ‘truth in packaging laws,’ so you’d think that would help. It does and it doesn’t. It means that they have a rabbinic authorities who claim that the product is kosher.

Here’s the statement from Jell-O:

JELL-O Brand gelatin is certified as Kosher by a recognized orthodox Rabbi as per enclosed RESPONSUM. In addition to being Kosher, Jell-O is also Pareve, and can be eaten with either a meat meal or a dairy meal.

They base this assertion on the work of Rabbis Yehuda Gershner and David Telsner. These gentlemen are following the opinion of one of the greatest Halachic authorities of the 20th century, Rav Chaim Ozer Grodzhinski (1863-1940). Reb Chaim Ozer held that if inedible parts (hide and bones) of a non-kosher animal are broken down to chemicals, those new products can be considered a new entity, and, therefore, kosher.

This gets complicated. Do you remember Kojel? Well, that product was produced by Emes Kosher Food Products, Inc. of Chicago, and distributed by Carmel Kosher Products Company. It definitely sounds ‘kosher’. It was made with the same basic process as Jell-O, and was certified kosher by Rabbi Judah Leib Seltzer.

This Rabbi Seltzer was involved in a number of Kashrut controversies and the Kosher Food Guide (put out by Organized Kashrut Laboratories, aka OK Labs, founded 1935), under an Orthodox chemist named Abraham Goldstein, was asserting that these chemicals (including glycerin) shouldn’t be considered kosher. Because their origin was non-kosher animals. BTW this same question covered the issue of marshmallows, which I don’t like, therefore, they will not be mentioned again.

I feel compelled to report that when a Mrs. S. Baumgarten from Brooklyn, wrote to the Kosher Food Guide about getting kosher gelatin, Goldstein informed her, ‘buy a calf’s foot, boil it down and you’ll have all the gelatin you need for a whole week.’ I’m sure that’s the answer she wanted.

Eventually, Kojel changed its ingredients and came under the OU. A number of women told me that the new product wasn’t as firm and bouncy as the original. Today, most of these gelatin-based products use gelatin derived from kosher fish bones. So, not Vegan, and some won’t use these products together with meat.

Here’s the problem for me: Rav Seltzer followed the position of Rav Chaim Ozer and was supported by Rav Yosef Eliyahu Henkin, who was at the time, one of the greatest Halachik authorities in America. This position was totally valid, but the major hashgachot weren’t going to accept it.

I think that this controversy set the pattern. The Orthodox Jews of America were going for higher and higher standards of Kashrut. Even when the opposing position was totally valid. Gelatin was first, and, of course, glat kosher standards for meat came next.

For me the problem is also the denigration of opposing positions. Actually, in one of the attacks of Rav Seltzer, one writer, Rabbi Moshe Chayim Ephraim Bloch, says that in his deliberations the Satan came to him and informed him that Rav Seltzer also went by the name ‘Louis’, case closed.

In the second half of the 20th century, we saw a new standard of Kashrut introduced in each decade; in the 50’s gelatin, in the 60’s glat kosher, in the 70’s Chalav Yisrael, in the 80’s yashan baked goods, in the 90’s bugs in the veggies.

Each of those issues deserves its own essay, or even book. But the momentum is clear: Let’s make the standard the strictest possible opinion. The problem is that, traditionally, that’s not how we functioned. We used to follow our own customs, and be tolerant of other positions.

I’m Lithuanian, for example. It should be perfectly fine for me to follow the norms of Lithuanian Jewry, as espoused by Rav Chayim Ozer and Rav Henkin, and eat Jell-O. Sadly, it doesn’t work that way.

BTW in Israel, generally, there is more tolerance and within the non-Chareidi population greater recognition of differing customs. For example, the Rabbanut will allow products to called kosher with the caveat that it’s meant for ‘ochlei (those who eat) gelatin’, or for those who consume ‘chalav nochri’, milk products produced by Gentiles. It’s like on Pesach, when products are stamped for ‘those who eat kitniyot’. I prefer this, because it recognizes that there are differing and legitimate customs.

In America, on the other hand, the major kashrut supervising organizations don’t make such information available. Products are either kosher or trayfe.

Please, forgive me for getting upset about this. The story of Orthodoxy going further to the right and the split with more modern ideas is not really my story. I want to write about the return of Orthodoxy as a vibrant and spiritual movement. The split in American Orthodoxy really begins in the 80’s after my story’s time frame. But already in the 50’s we can see the roots of the issue.

And it all starts with Jell-O. Such a wonderful desert: colorful, tasty and fun. It jiggles! There’s always room for Jell-O!

About the Author
Born in Malden, MA, 1950. Graduate of YU, taught for Rabbi Riskin in Riverdale, NY, and then for 18 years in Efrat with R. Riskin and R. Brovender at Yeshivat Hamivtar. Spent 16 years as Educational Director, Cong. Agudath Sholom, Stamford, CT. Now teach at OU Center and Yeshivat Orayta.
Comments