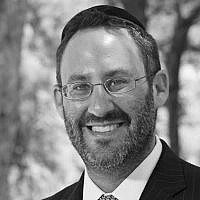 The Blogs
Dovid M. Cohen
Rabbi Congregation Ohr Torah-N. Woodmere
Apply for a Blog
Advertisement
Please note that the posts on The Blogs are contributed by third parties. The opinions, facts and any media content in them are presented solely by the authors, and neither The Times of Israel nor its partners assume any responsibility for them. Please contact us in case of abuse. In case of abuse,
Report this post.

On the heels of the recent heinous anti-Semitic attack in Jersey City, many are searching for a cogent response. Anti-Semitism is flourishing in the United States of America circa 2020. Attacks were up 63% in New York City for 2019 and the Anti Defamation League reports record numbers of occurrences across America in 2019. The last fourteen months have seen deadly attacks on Jews in Pittsburgh, San Diego and now Jersey City.

There is a Torah thought from Rav Elchonon Wasserman, of blessed memory, that may shed some light. As a Rosh Yeshiva in Europe at the rise of the Third Reich, he had a unique window into understanding the ravages of Jew hatred. Rav Wasserman was in the United States in 1939 collecting money to support his Yeshiva. He understood the likely outcome of his returning to Europe, but couldn’t leave his students to suffer their demise by themselves.

On July 6, 1941 in the midst of his studies in the Kovno Ghetto, crazed Nazi soldiers burst into the room and led the study group on a death march.

“It appears in Heaven they view us as righteous worthy to atone with our lives for the people of Israel.   We must remember that we will in truth be those who sanctify G-d’s name. Let us go with heads erect and have no unworthy thought. The fire which will destroy us is the flame out of which the Jewish people will be re-built.”

The story in last week’s Torah portion Vayishlach of the confrontation between Yaakov and Esav foreshadows Jewish history. Our long-bitter exile is a place where negative encounters with our enemies are frequent. The enemy attacks unexpectedly and particularly when we are in a place of darkness and insecurity.

R’ Elchonon asks why the confrontation takes place only with Yaakov? Weren’t his predecessors, Avraham and Yitzchak also spiritually substantial enough to be attacked by these forces of negativity? Why was this confrontation-reserved exclusively for our Patriarch Yaakov?

He explains that Yaakov represents the culmination of the work of his predecessors. He is the completion and the perfected version of the efforts of his ancestors. He’s known and defined by his Torah study, which is the core commandment of a Jew. The forces of evil don’t waste time with ancillary qualities; rather it harnesses its energy to struggle with the most fundamental aspect of Judaism-The Torah, represented by Yaakov.

However, as the story plays out, Esav falls short in his battle with Yaakov. He is unable to overcome and completely knock him out. Instead, he grabs the thigh of Yaakov. This act has ramifications impacting the laws of Kashrus until today as we are forbidden to partake from this part of an animal.

R’ Elchonon shares a unique perspective on the actions of the angel of Esav. He suggests that the thigh represents the young children of the Jewish nation. The thigh, which is the bridge between legs and body, is the support by which the Jewish people stand and perpetuate. The angel is attacking the Jewish future represented by Torah study of pure young children.

As the aftermath of the Jersey City calamity unfolded, it became clear that the goal of the terrorists was the fifty young children studying Torah immediately next door. Only the bravery of the police and other fortuitous circumstances ensured the safety of these young children, who were so close to the shootings.

The Slonimer Rebbe, of blessed memory, shares a novel insight in discovering the spiritual task of each generation. He explains that during the years when R’ Elchonon lived, the years of the Holocaust, the service of the generation was the mitzvah of Kiddush Hashem, sanctifying G-d’s name.

Our generation he suggests is different. Our task is focused on the study of the holy Torah. The principle used by the Rebbe, is that we can glean from what is transpiring in a particular time period as to what the core role and task of the nation is.

Our generation has witnessed a proliferation of Torah study and re-birth of Yeshivos and therefore sends a message as to what our focus should be. Additionally, we are taught that the pure words of Torah uttered by the children of the generation are most beloved before G-d.

Using the methodology of the Slonimer Rebbe, we can suggest a valiant response to the events of this past week. Where the enemy attacks or wants to attack is a sign as to where our focus should be. When our people are facing an onslaught, the likes of which have never been seen on American shores, one response should be to turn inward and invest more in our future.

The Lubavitcher Rebbe of blessed memory, told Bibi Netanyahu upon his assuming the role years ago, representing Israel at the United Nations; “a little light can push away much darkness.” As the current Prime Minister entered a place of darkness for our people, his role was to shine a drop more light. As we are facing very dark days in exile, we each must shine more light within our spheres of influence.

Chanukah is the time in our history where a minority group, committed and dedicated to preserving the Torah, was able to persevere and merited miracles against a mighty enemy. The root of the word Chanukah is “chinuch,” educating and re-dedicating in perpetuating the Jewish future.

Our enemies often understand better than we do, where our “thigh” is. The source of our foundation is the place to invest energies during this festival period. More time and energy ensuring our youth are rooted and are passionate about our spiritual legacy and heritage.

As R’ Elchonon predicted in 1941, “the fire which will destroy us is the flame out of which the Jewish people will be re-built.” In moments of great darkness are buried kernels of hope to be built upon.

When we light the Menorah on Sunday evening and continually throughout the festival, it should kindle within each of us a fire to preserve and ensure the Jewish future despite the many enemies and challenges we face. The message of Chanukah is that no matter how great the odds against us are, with the help of G-d we will surely prevail.

About the Author
Rabbi Dovid M. Cohen is the Rabbi of Congregation Ohr Torah in North Woodmere, NY. He is also a Senior Relationship Officer at Yachad. His book “We’re Almost There: Living with Patience, Perseverance and Purpose” (Mosaica Press 2016) is available at www.rabbidovidmcohen.com. Check out his Podcast The JPP: Jewish Philanthropy Podcast http://jewishphilantropypodcast.libsyn.com/ and his lectures at https://www.torahanytime.com/#/speaker?l=1081.
Comments