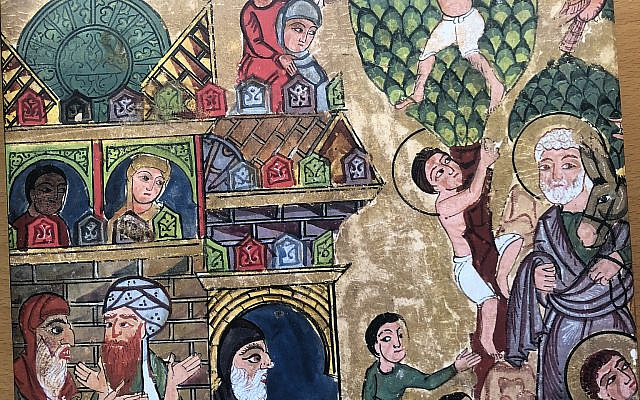 This beautifully-produced combination of a coffee-table book and exhibition catalogue was produced in conjunction with the exhibition of that title held in New York in 2016. For the exhibition hundreds of precious, beautiful and fascinating artefacts produced in and concerning Jerusalem in the Middle Ages were amassed from a wide range of sources all over the world. The book is a work of art in itself, with first-rate illustrations of the exhibits on each of its over three hundred pages of 150 gsm Perigord paper, typeset in Agmena and Dava Pro fonts, as the extensive and comprehensive final acknowledgements section tells us.

How I would have loved to be able to wander through the exhibition for several days, as it must have been a veritable wonderland of objects, manuscripts, reliquaries and jewellery created in mediaeval times, inspired by the city and concept of Jerusalem. For Jerusalem was not solely a physical but also a spiritual entity, a site of worship of all three principal religions, as well as a battleground where each one vied for supremacy.

One of the book’s opening paragraphs reads: “In about the year 1000 an extraordinary convergence of circumstances brought new attention to the medieval city, which continued unabated for the next four centuries. These included natural disasters, political turmoil, intense religious fervor, and a notable uptick in world travel.”

Thus, in the 1020s the Fatimid caliph of Egypt made agreements with Italian merchants and the Byzantine emperor to join him in rebuilding the city after a series of earthquakes, and the Karaites, a community of Babylonian Jews, proclaimed the need to move to Jerusalem. In 1099 European Christians achieved their dream, by means of the Crusade, of conquering Jerusalem. By 1187 Saladin, founder of the Ayyubid dynasty, had retaken the city for Islam, to be succeeded by the Mamluk sultans who governed from Egypt. Each ruling power built and rebuilt monuments and centres of worship and study, in accordance with their beliefs, and in many cases destroyed those of their predecessors.

Improved conditions of travel by sea and land in the twelfth and thirteenth centuries enabled pilgrims and travelers to reach Jerusalem, and some, such as Jacques de Vitry, bishop of Acre, an Anglo-Saxon monk known as Saewulf, and the Spanish Jewish poet Judah Halevi, inter alia, left accounts of their travels, the storms they encountered at sea, and the wonders of Jerusalem.

On arrival in Jerusalem visitors were often as astounded by its markets as by its holy sites, with vaulted bazaars, areas devoted to specialized artisans, and a wide variety of goods on offer, as well as plentiful food. A visitor from Italy, marveled at the variety of foodstuffs available, another at the wide selection of meats and the abundance of kitchens, while a third noted ‘the citron, the almond, the date, the nut, the fig, the banana, milk in plenty, as well as grapes, honey and sugar.’

In both Hebron and Jerusalem, which were among the foremost pilgrimage sites for all three religions, as well as Nazareth and Bethlehem for Christians, food and religion were interconnected, mixed with commerce and motivated by the large numbers of visitors. For Christians, Jews, and Moslems a pilgrimage to Jerusalem was an important feature of religious worship, so that the city served as a lodestone for people from all over the world. Trade was also an important reason for travel, and commercial activity served to foster relations and interaction between the various communities.

The artefacts in the exhibition display the amazing skill and resourcefulness of the artists and artisans of the period, with each religion and community presenting its own special achievements and trends, whether in objects or manuscripts, some of them including beautiful, colorful illustrations. The period appears to have been characterized by immense creativity as well as intellectual and political activity, not to mention the armed combat that took place in and around the region.

All three main religions and the myriad communities comprising each one combined to produce a colourful array of objects, paintings, and artefacts that still today inspire us with wonder and enable the contemporary observer to enter, albeit partially, into the world and mindset of the people who inhabited and formed that fascinating period in human history.