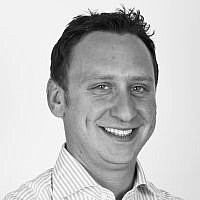 The Blogs
Justin Korda
Apply for a Blog
Advertisement
Please note that the posts on The Blogs are contributed by third parties. The opinions, facts and any media content in them are presented solely by the authors, and neither The Times of Israel nor its partners assume any responsibility for them. Please contact us in case of abuse. In case of abuse,
Report this post.

Yehuda Amichai, known as Israel’s greatest modern poet, once wrote, “Jerusalem is a port city on the shore of eternity.” For Jerusalem to remain the eternal quintessential Jewish city, it must ensure its relevancy to each and every generation. In this regard, the quiet and complex evolution it is currently experiencing may be its most important and necessary yet.

Jerusalem has long been perceived as a city of the past, of the Western Wall, Shabbat restrictions and cloistered streets, with very little relevance for those seeking non-religious identification. Tel Aviv, on the other hand, is seen as the city of the future. Newer and more vibrant, Tel Aviv is the free-spirited Israeli city with character, funk and a positive disposition.

Put off by the direction they saw Jerusalem moving, many disenchanted Jerusalemites—especially Jewish and Israeli youth—escaped to Tel Aviv and its surroundings. It has become the city many young Jews around the world identify with, while they slowly disconnect from the Jerusalem of belonging and affinity.

This disconnect reflects the growing chasm between “belonging to” and “identifying with” that is at the heart of the modern-day struggle for Jewish distinctiveness. Today, a sense of belonging to the ancient capital of our ancestors alone will not suffice if we cannot relate to and appreciate Jerusalem’s relevance to our contemporary lives.

If being a Jew is merely to follow mantra and dictums handed down to us, then it is hard to help young Jews feel a sense of belonging in Jerusalem. Judaism, however, is far more than a religion; it is a history, a culture, a civilization and, importantly, a people. Jerusalem sits at the heart of it.

This is why we must show the young people who visit Israel that Jerusalem is once again fulfilling its purpose as the epicenter of the Jewish world and identity.

Examples of the Jerusalem’s renaissance are starting to appear all over the city. Every year, the Jerusalem Season of Culture summons the ancient muse for an annual summer showcase of the city’s contemporary cultural treasures, hosting a series of riveting artistic experiences spanning the worlds of dance, music, poetry, philosophy, visual art, new media and more.

Bars, clubs and discos are appearing across the city, open seven days a week, with the famous Machane Yehudah Shuk becoming as well known for its after-hours bars and parties as its delicious daily fare and produce. In addition, there are regular jazz evenings, thought-provoking movie screenings, art exhibits and lectures taking place regularly at avant-garde galleries.

Jerusalem is reaching a tipping-point in its modern history. A sense of belonging and identity are returning to the City of David, which can once again become a magnet for Jewish unity and solidarity. It can become a hip, cultural city of the future that juxtaposes new and old, ultra-modern with ancient charisma. But it can also fall back into the lull that characterized its recent identity, where some will come and touch its antiquated and holy walls, but quickly seek escape on the road to the coastal region.

The answer will depend on those of us who have a stake in the city at the core of our identity and who care deeply about and feel the urgency of Jerusalem’s redemption for its many diverse residents and the Jewish People around the world.

We need to sustain the air of excitement and anticipation that is growing in the streets of Jerusalem. We need to ensure the city’s relevancy for a new generation that was not previously exposed to its many layers. We need to keep its feet in the past, but its eyes firmly on the future, ensuring that young Jews who visit our capital city can enjoy the best of both worlds in the present.

It was said by the Biblical Prophet Zachariah that redemption would come when the youth return to the streets of Jerusalem. More recently it was HaDag HaNahash, an Israeli hip-hop band made up of Jerusalemites considering the move to Tel Aviv, who wrote a song titled “Here I come” capturing their feelings of a potential exodus to the White City.

While the song lists the commonly suggested reasons to move to Tel Aviv, the final verse relates that while Tel Aviv “glimmers,” they return to Jerusalem because “the most important thing is to be happy.”

All of us who have an interest in Jerusalem’s future as well as its past must take an active role in spreading the message of Jerusalem as a modern, open, vibrant capital that straddles time and history. We must return Jerusalem to the center of Jewish Peoplehood and, as Amichai called it, remains “the port city on the shore of eternity.”

About the Author
Justin Korda, ROI Community’s Executive Director, has been with ROI since its inception in 2005. He was influenced by his Jewish activist experiences growing up in Montreal, Canada, that saw young people as “Robin Hoods” for change. Justin believes in the importance of making Judaism accessible to a new generation of Jews who live in a secular world that competes for their interest. In 1999, Justin led the first Taglit-Birthright Israel trip from Canada. He went on to become the coordinator of follow-up programs for returning participants and later served in a number of positions at the Canada-Israel Experience, where he was instrumental in implementing Taglit-Birthright Israel for the first 5,000 Canadian participants. Justin holds an M.B.A. from the Interdisciplinary Center (IDC) Herzliya and a B.A. in political science from McGill University. He and his wife, Yael, live in Jerusalem, with their son, daughter and dog.
Comments