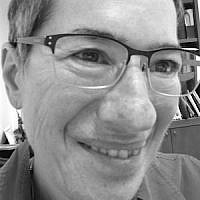 The Blogs
Deborah Greniman
Apply for a Blog
Please note that the posts on The Blogs are contributed by third parties. The opinions, facts and any media content in them are presented solely by the authors, and neither The Times of Israel nor its partners assume any responsibility for them. Please contact us in case of abuse. In case of abuse,
Report this post.

Several years ago, we took a short drive into Kfar Adumim, a pleasant bedroom suburb of Jerusalem, on the well-traveled road linking Jerusalem to Ma’ale Adumim, Jericho and the Dead Sea. In a bid to attract young families, a huge sign over the settlement’s entrance read “Education is our highest priority!” Indeed, Kfar Adumim has a beautiful school.

But if the residents of Kfar Adumim really value education, they might want to pop over to a place they’ve never been: the neighboring tin-shack Bedouin village of Khan el-Ahmar. It, too, has a remarkable school, well worth a visit. But you’d better hurry: In line with the government’s policy for the area’s Bedouin and at the instigation of some Kfar Adumim residents, bulldozers stand to wreck the school in Khan el-Ahmar, and its village as well.

On our visit to Khan el-Ahmar, Alicia, a Spanish nun wearing jeans and a T-shirt, filled me in. Like many of the area’s Jahalin Bedouin, the village’s clan gained refugee status in 1951, when, faced with Israel’s takeover of their ancestral lands in the southern Judean Desert, they moved northward to the Jordanian-occupied West Bank. Israel caught up with them in 1967, and now, after Oslo, the place is designated as Area C, under full Israeli government control (with the Palestinian Authority, which takes little interest in Bedouin, responsible for civilian welfare). Although they settled there decades before the Jerusalem-area settlements began closing in on them, the Jahalin have no rights to the lands on which they live, in dire poverty, attempting still to pursue their traditional shepherding lifestyle.

As refugees, the children were sent to a school run by UNRWA (the United Nations Relief and Works Agency for Palestine Refugees in the Near East) in Jericho, about twenty minutes’ drive away; but no authority — Palestinian, Israeli or UNRWA — would provide a school bus. The kids were supposed to use public transportation — a bus whizzing by on the highway, with no bus stop, no sidewalk and often no service. After several children were killed or injured, the villagers clamored for an accessible primary school.

Enter an Italian NGO called Vente de Terre, which specializes in sustainable building projects. They proposed building a school from cheap, locally available materials: used tires coated with adobe made from the local reddish clay soil. In a few weeks over one summer, the villagers, guided by a Vente de Terre architect and aided by Israeli and international volunteers, erected a clean, solid building, so well insulated that it needs no air conditioning in the desert heat.

A year or two later, my spouse, Rabbi Yehiel Grenimann of Rabbis for Human Rights, which helped build the school, took me there. Unlike many schools built for but not by the Bedouin, there was not a trace of vandalism or neglect: The school is clean, tidy and well maintained, with a little garden. Alicia explained that apart from the kids not getting killed on the road, the school plays a huge role in the girls’ education. The tradition-bound Bedouin wouldn’t allow their daughters to be bused out of the village beyond the fourth grade, and many never went to school at all; in their own school, they stay through eighth grade, and many continue to high school.

In principle, it is illegal for the Bedouin “squatters” to erect new structures, and residents of Kfar Adumim — though responsible, as Israel’s High Court has pointed out, for numerous illegal structures of their own — have repeatedly called for the school’s demolition. For them, their Bedouin neighbors are a nuisance, blamed for any petty crimes that occur in the area and impeding plans for expansion. The court blocked previous threats to the school when the government failed to offer any reasonable alternative plan for the kids’ education.

Now, however, the government has issued orders for the demolition – in the next few days — not only of the unique “Tire School” but of the whole tiny village of Khan el-Ahmar. Where will the Bedouin go? To the “jabel” — the hilltop adjoining Jerusalem’s main garbage dump in Abu Dis, built partly on poisonous landfill, where the government has already resettled hundreds of Bedouin. Or to El-Nueima near Jericho. In neither place have any preparations been made for housing or schooling them. In both, other Bedouin clans fiercely oppose a strange clan being dumped on them. (Think of the care invested in resettling the squatters in another illegal village — the Jewish settlement of Amona.)

Go and take a look at the famous “Tire School” before it’s too late. You’ll see a sustainable architectural marvel erected right on Jerusalem’s northeastern doorstep, yet almost unknown. If you happen to live in Kfar Adumim or Ma’ale Adumim — go and see what your neighbors can do on a shoestring when they put “education first.”

And then ask yourselves what will happen to these people. Dumped in the “jabel” or next to Jericho, their traditional lifestyle will disappear. There’s no future in herding, but there’s also no future in unemployment, delinquency and child marriages for the girls, often polygamous and to their cousins, so that many will end up raising kids with genetic diseases — problems that exist now and will only worsen. The Israeli government needs to work with the Bedouin on creating a sustainable lifestyle, wherever they end up living. The key is surely to put “education first” — and the Bedouin of Khan el-Ahmar have shown that they know how.

About the Author
Deborah Greniman, an editor, translator and occasional writer, is Managing Editor of NASHIM: A Journal of Jewish Women's Studies and Gender Issues, and a Senior Editor at the Israel Academy of Sciences and Humanities. A long-time member of Kehillat Yedidya in Jerusalem and of the Tag Meir and Netivot Shalom organizations, she is the mother of four adults and has two grandchildren.
Related Topics
Related Posts
Comments