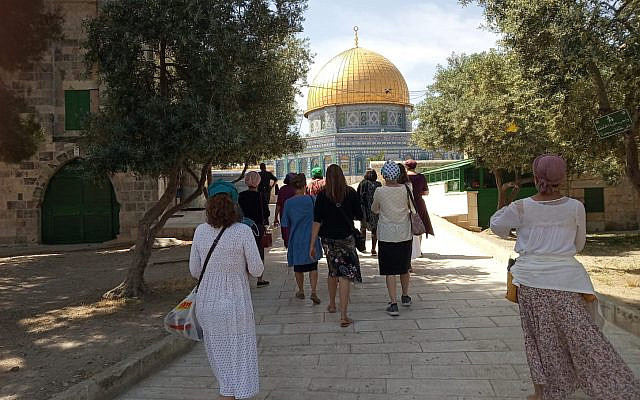 The Temple Mount this week, before its closure to Jews. (Photo: Linda Pardes Friedburg)

I was fortunate to go up to Har Habayit – the Temple Mount – at the beginning of this week. The group I joined prepared this visit in honor of Jerusalem Day, though in the end we went up carrying the pain of the families of the Mt. Meron victims and prayers for increased love among the Jewish People in our hearts.

The metaphor in my mind was the breastplate of the High Priest, with its twelve colored stones, representing the tribes of all Israel. Such unity, we felt, must be our focus today.

Meaningful experiences usually require forethought and preparation. As much as I was tempted, I could not simply go up to the Temple Mount on a whim while visiting the Kotel.

I first immersed in a mikveh, after sundown, and prepared with a Zoom class by our guides, Rabbi Ari and Haya Shames, on the modern topography of the Mount, the halachic guidelines, and the meaning of visiting Har HaBayit.

The religious Jewish world is divided in its approach to going up to the Temple Mount, and these diverse views are all legitimate.

There are Jews for whom out of respect for its holiness will not tread there, and there are those who study the sources regarding where Jews can and cannot walk and rules for ritual purification, because they believe that a Jewish presence on Har HaBayit is the natural and essential continuation of our return to Israel, of reestablishing Jerusalem as a seat of justice, wisdom, and light, and a spiritual center for us and the entire world – “My House will be called a house of worship for all the nations.” (Isaiah 46:7)

The morning we went up, we saw and thanked the many Israeli policemen and policewomen there. In contrast to previous years, because of their good work, our visit was very peaceful.

A kind Arab Israeli policeman named Ahmed escorted us, as Waqf workers took videos of us on their cellphones at every stop, and one Muslim grandmother who seemed very offended by our presence, screamed at us and filmed us with her phone. Otherwise we were able to focus on the views, the history, and our prayers.

We listened to our guides and shared our thoughts. Facing that most holy place and standing on those ancient stones, my eyes filled repeatedly as I thanked and prayed – for many individual people, for unity, for leadership.

Being on the Mount sharpens one’s perspective. The Kotel was behind and below us, and as one of our group phrased it, “The Kotel is holy, but it is like the parking lot. The Temple Mount is home.”

This is not a crazy Messianic thought. The 641 references to Jerusalem in Tanach refer not to Ben Yehuda Street but to the Temple Mount, chosen by God from the days of creation, according to the midrash, and purchased by King David with 600 gold pieces.

Har HaBayit still remains the spiritual compass and center of our world, and the reason we all returned to Israel.

We stood on the road from the Lion’s Gate through which the paratroopers liberated the Temple Mount and then the Kotel on Jerusalem Day, 54 years ago, and Commander Mota Gur, radioed the emotional message, “The Temple Mount is in our hands!”, after 2000 years of Jewish yearning.

Had we not immediately given up the keys to the Temple Mount to the Waqf, this statement might still be true, and all the nations would be free to worship there today.

Instead, the ironic and shameful “status quo” on the Har is that only Muslims have unlimited access, non-Muslims are allowed up during very restricted hours, and Jews are forbidden to carry religious items (including prayer books) or visibly worship.

And as we know, in the absence of Israeli intervention, the Waqf has been systematically destroying archeological remnants of the Temples in order to build its own structures on the Har.

The Arab world understands more than we do that our ambiguous relationship to the Temple Mount is also the reason we lack clarity and resoluteness regarding the rest of our biblical land.

Perhaps we were not unified and spiritually prepared enough to receive the gift of the Temple Mount in 1967. But I believe that small gestures make a difference, and that visiting Har HaBayit in the proper manner manifests our belief in and gratitude for God’s hand in our history, and our active yearning for a less broken world.

It is no coincidence that the sources connected with the place of the Temple in Jerusalem have to do with both devotion to God and brotherly love.

The return of Jewish sovereignty to the Har, and efforts towards Jewish unity, are key to God’s presence among us, and Israel’s future as a beacon of faith, connectedness, wisdom, and justice to the world: “They will make me a Tabernacle, and I will dwell among them.” (Shmot 25:8)

“Jerusalem rebuilt – a united city which binds us together.” (Tehillim 122:3)