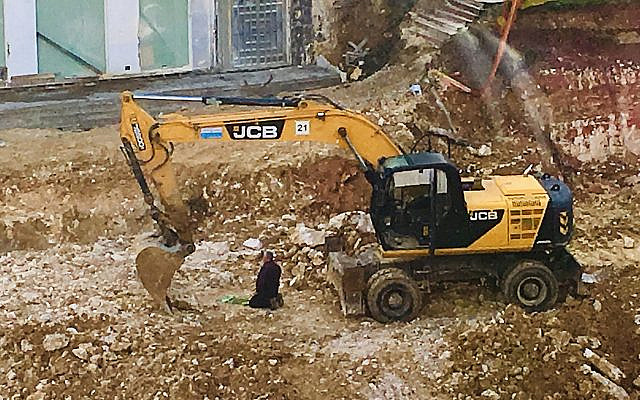 On site prayers, my photo

It’s been tense here in Jerusalem since Ramadan began in mid-April, and things are set to heat up again next week when Jews celebrate Jerusalem Day, the anniversary of the reunification of the city after the Six Day War.

Once a modest affair celebrated by a wide range of Jerusalemites, Jerusalem Day’s main event, the flag parade, now attracts thousands of young people from the settlements and very few residents of the city. Its route, unfortunately, runs through Damascus Gate, a site of recent tension, into the Muslim Quarter of the Old City.

In recent years, the Jerusalem municipality has made efforts to contain triumphalism and racist hatred among the marchers. But this year, hot on the heels of a recent extreme rightwing demonstration calculated to incite the city’s Palestinian residents, it could be worse than ever.

What to do? Many people leave the city on Jerusalem Day or stay inside. But a few years ago, an inspiring young activist called Michal Shilor had the idea of trying to shift the balance. Michal initiated Yom Yerushalmi, a Jerusalemite Day of Diversity, when the city’s residents are encouraged to organize activities and events that spotlight the whole spectrum of people who live in Jerusalem. You can see what will be going on this year (in Hebrew, Arabic, French and English) under the Yom Yerushalmi umbrella here.

When Michal first told me about her idea, I was skeptical. I had unfortunately witnessed Yom Yerushalayim racist hatred first-hand, and thought it might be impossible to turn the tide. 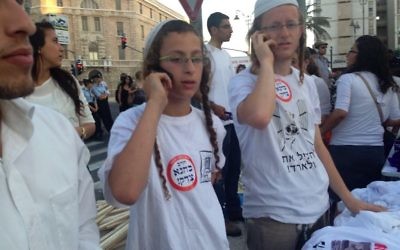 But I decided to throw in my lot with Michal, and now with her Yom Yerushalmi successor, Tal Alafi. 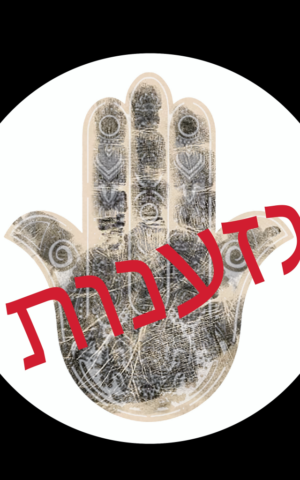 Last year, my Yom Yerushalmi activity was virtual: a three-hour Zoom symposium called Jerusalem Time, featuring an Imam, a Greek Orthodox Priest, a professor of Talmud, a maintenance artist, a climate crisis activist and more. If you missed it live last year, you can watch it now on YouTube. The first session, urban explorer Julian Barnett on time and clocks in the holy city, has remained especially timely.

This year, Israelis are back on the streets in force, and my two Yom Yerushalmi events are, as my Tel Aviv University students say, IRL (In Real Life). The first is a pop-up photography exhibition called ‘We will build Jerusalem’. It’s a celebration of the construction site that we’ve had the mixed privilege of overlooking for the past three and a half years.

Mostly, I’m sad about the apartment blocks that are going up next door. They’ve already deprived the community of a beloved swimming pool, and soon they’ll deprive us of our late afternoon golden light and glorious sunsets. 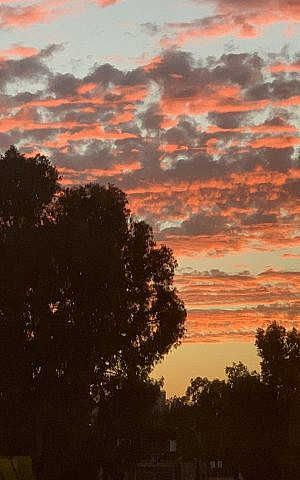 A Jerusalem sunset from our kitchen window, my photo

But in the meantime, for me at least, it’s been like having a front-row seat at a spectacular 24/7 performance art installation, a contemporary dance of machinery and men on a constantly shifting stage set. Thank you, New York City Sanitation Department official unpaid artist in residence Mierle Laderman Ukeles. It’s because of your visionary art and humanity that I knew how to make the most of this. (You can watch Mierle talking about maintenance as a philosophy of Time at 1hr on my Jerusalem Time video). 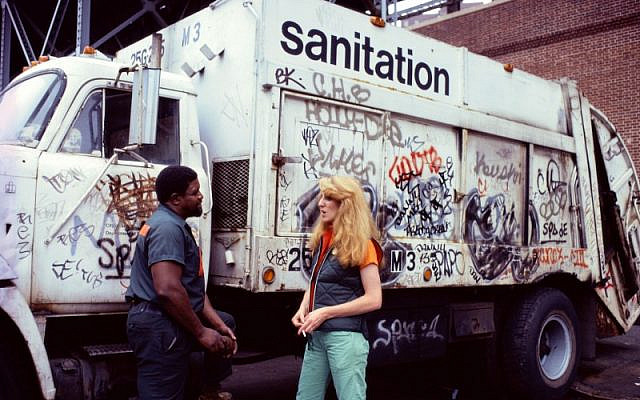 And thank you Toby Freilich (who interviews Mierle on the Jerusalem Time video) for sending me ‘The Monolith‘, a poignant 10-minute movie about a New York City-based artist in the process of losing her studio’s Manhattan skyline. It expresses so well some of the emotions I’ve been feeling – from awe at the construction process to a sense of impending loss. We will Build Jerusalem, 18.30, Sunday 9 May, The Mesila between Azaria and Hananya

On Sunday May 9th, from 18.30 until it’s too dark to see, I’ll be exhibiting about a hundred photos I’ve taken from our windows over the past three plus years. For a fresh look at construction, come to Rehov Ha’Rakevet (the Mesila) between Hananya and Azaria, and look for the construction site. 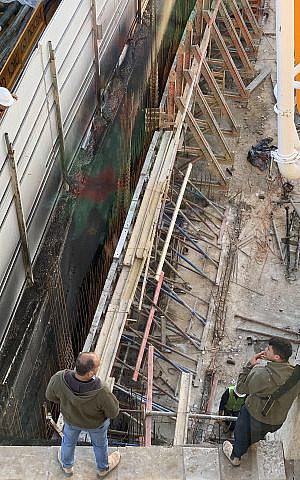 An elevated conversation, my photo 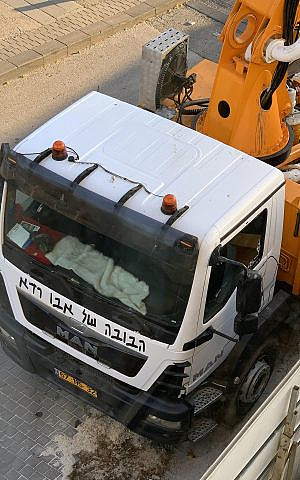 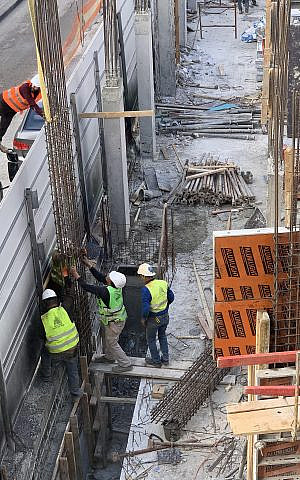 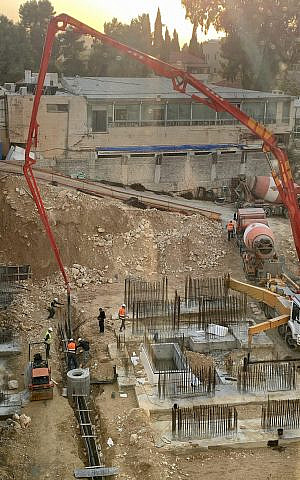 My second Yom Yerushalmi event is in honor of Ramadan. The fast ends every day at sunset, signaled in Jerusalem by the Ramadan cannon, with a festive meal called an Iftar. I’ve been invited to several since I came to Jerusalem ten years ago, but, for kashrut reasons, I’ve never been able to eat. So this year, I’m working with Palestinian master-chef Magdah Alshane on a kosher Iftar, prepared entirely by Magdah using kosher products in our kosher kitchen. This will be my third event with Magdah. You can get a flavor of the second here. 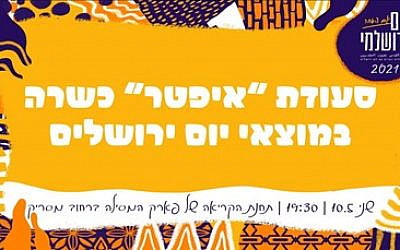 Kosher Iftar, 19.30 Monday 10 May, The Mesila Reading Station at Masaryk

Come to the Mesila Reading Station at Rehov Masaryk at 19.30 on Monday May 10th, the end of Yom Yerushalayim. There’ll be music (oud and percussion), a conversation between Magdah the chef and Elisheva Milikowsky about food, women and Ramadan, and Magdah’s amazing food.  This event is partnered with Yom Yerushalmi and the National Library of Israel’s wonderful Ramadan Nights program. The kosher Iftar is free and open to all. 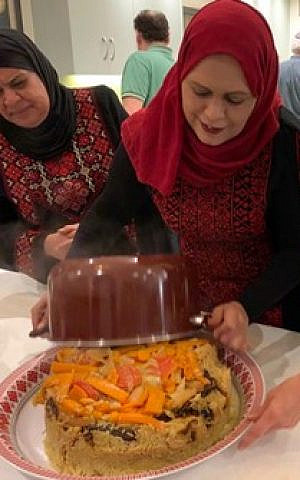 Magdah Alshane, my photo
About the Author
Before I moved to Israel in 2011, I was a Fellow of Newnham College, Cambridge (1997-2006), and a Reader in Hebrew Bible and Jewish Studies at King's College London (2007-2011). In Israel, I've taught Bible at Hebrew University's International School and, currently, in the Department of Biblical Studies at Tel Aviv University. I give a weekly parsha shiur at Beit Moses home for the elderly in Jerusalem. I serve on the Boards of Jerusalem Culture Unlimited (JCU) and Hassadna Jerusalem Music Conservatory. I'm the very proud mother of Jacob and Jonah, and I live in Jerusalem with my husband Chaim. My last book was 'From Forbidden Fruit to Milk and Honey: A Commentary on Food in the Torah'; proceeds go to Leket, Israel's national food bank. My next book will be on the Bible and the climate crisis.
Related Topics
Related Posts
Comments