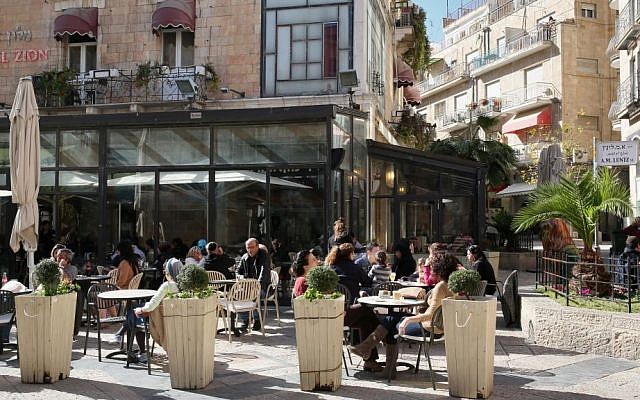 Illustrative: Israelis enjoy the sun as they sit outside at Cafe Rimon in downtown Jerusalem on January 14, 2013. (Nati Shohat/Flash90)

Yesterday I woke up in my house in a “settlement” in the “occupied territory.” My son took the bus to his school, also in the “West Bank” while I drove into Jerusalem — the city on edge.

JERUSALEM — This is a tense city on a good day.

You feel it behind the wheel: The traffic signals turn red and yellow to alert a coming green. Hesitate a half-second before accelerating? A honking horn. Schoolgirls gesture at motorists as they step into a crosswalk, fingertips bunched and faces scowling: Will you wait, or what?

At lunch, a few of my colleagues and I decided to go out. We sat at an outside table enjoying the sunshine at a restaurant located less than a football field from the “Green Line,” the line that separated Israel from the Palestinians back before 1967.

You hear it in the way people talk — “The Arabs,” “The Jews” — about people with whom they have been sentenced to share a tiny patch of soil atop a ridge with no strategic value, over which the world has been battling for thousands of years, and negotiating on and off for decades, with no end in sight.

…The day-in, day-out friction can be draining. And when the conflict bubbles up, even natives can question why they persist.

After work, I went for a run. I have a standard 15 kilometer course that takes me across the heart of Jerusalem. My run takes me directly through both Jewish and Arab neighborhoods. As usual, there were plenty of Arab teens “hanging out” along parts of my run, having a good time with their friends.

For Jerusalemites, stress is something to learn to live with. It builds up, day by day

At one point, there is a school with a mosque next door. I always look over to see if they are playing soccer on the school’s field. Last night was no different, the field was filled with kids chasing the ball and yelling back and forth.

“But there’s a big religion problem in Jerusalem,” he [an Arab interviewed for the article] said. “It’s a city of racism. Once there’s a little bit of balagan” — chaos — “between Jews and Arabs, Jews won’t go in my taxi, and Arabs won’t go to the mall. And if I go into a religious neighborhood and they find out I’m Arab, they’ll stone my car.”

After my run, I take a shower and pick up my son from a climbing gym in Jerusalem. We go to the mall to grab something to eat. The mall is packed with Jews and Arabs. Even without much observance of Christmas, it’s the time of year for sales and shopping.

We make the drive back into the “West Bank,” back into the territories that the world believes are brimming with hate and violence, back to our home in our “settlement.”

People see what they want to see. The New York Times Jerusalem bureau chief who wrote the article that I have excerpted went out looking for tension and hatred and despair. I have no doubt that he found it and that the people he selected to interview really believe that the city is on the brink.

Yet his description is not what I find every day. I find a city where a remarkable number of its inhabitants are content and go about their daily life with no hatred or violence or “days of rage.”

Whether a Jew is taking a run after work or Arab teens are playing football in the heart of the city, Jerusalem is still the same city it was before President Trump’s announcement.

While I can’t predict the future, I do feel optimistic that the city will continue to serve as an exceptional — though not perfect — and rare model of coexistence. In the Middle East, we are so used to reports of the inhabitants of a city slaughtering one another that we tend to accept them without much of a second thought.

It is always dangerous for a reporter to try and write a “slice of life” article because in a city of almost a million people, there will be almost a million different stories and perspectives. Selecting a handful of malcontents can easily give a warped impression for the world to read.

But I’ll keeping running through it because I feel the city, Israel’s capital, is much safer than most cities in the world.

Yarden Frankl, The Center for Analysis of Media Coverage of Israel.