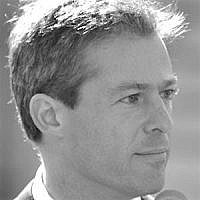 The Blogs
Aaron Parker
Apply for a Blog
Please note that the posts on The Blogs are contributed by third parties. The opinions, facts and any media content in them are presented solely by the authors, and neither The Times of Israel nor its partners assume any responsibility for them. Please contact us in case of abuse. In case of abuse,
Report this post.

“The world, that understandable and lawful world, was slipping away.”
— William Golding, Lord of the Flies

Today I witnessed something I’m still shaking from. The Mayor of Jerusalem came to San Francisco, and I attended his planned speech at San Francisco State University, where he was prevented from speaking in a high profile public humiliation of Israel and the Jewish community.  The media are reporting he was shouted down by protestors, which makes for a nice headline, but it isn’t the real story.  The real story is the university’s decision to let it happen.

Mayor Barkat’s visit was planned.  University administrators expected both him and the disruptors, who reliably attend all Israeli speaking events here.  The university police were sent in.  But, in a decision that should deeply disturb all who value a civil society, and one that I as a Jew find profoundly demoralizing, the police were instructed not to remove the disruptors and instead to stand by and watch the event be completely shut down.

Please let that sink in. Public university administrators and police stood and watched as the Mayor of Jerusalem, the Jewish student organization that sponsored him, and all of us in attendance, were permanently bullied off the stage.  Officers with guns, and the power that comes from the barrels of those guns, were instructed to stand, watch, and do nothing, as freedom of speech was replaced with a policy of whoever shouts the loudest wins, at least when it comes to shouting down a visiting Israeli dignitary. Those whom we thought were there to protect us and restore order, stood, watched, and did nothing.

The administrators’ and police’s high profile inaction emboldened the mob, which consequently grew louder and more brazen.  We waited and waited for the disruptors to be removed so the event could proceed, but it never happened.  Eventually, Mayor Barkat asked us to huddle around him so he could speak to us over the mob’s chants, but it was a lost cause.

Presumptive of them you might think, that a public university campus is theirs, and not all of ours.  Except, incredibly, they’re right. The university’s decision not to protect the speaker’s right to speak or the community’s right to hear him, constituted a de facto ceding to the mob the power to decide who is allowed to speak on campus and who is not.  The university’s acquiescence to the mob means it is in fact their campus, not all of ours.

The underlying question of course is why was the event allowed to be scheduled at all if the university planned not to protect the speaker or his audience?  Why did it give him a forum only to publicly humiliate him, along with the campus Jewish community and the broader Jewish community?

We can only speculate the answer, but it would seem the spectacle was intended to send a message to campus Jews.  Don’t invite Israeli dignitaries.  They aren’t welcome.  We won’t protect you, and we will humiliate you, your guests, and the Jewish community if you do.  If this was the intended message, it was received.

As a Jewish San Franciscan, I was profoundly shaken by the experience.  I was prepared for the anti-Israel movement to be there.  They’ve grown chillingly disciplined in recent years.  I expected them to be given a space outside the event to yell hateful rhetoric and engage in theatrics.  I was prepared for the likelihood of having to pass them on the way in, threatening me, calling me anti-Semitic epithets, because it’s how they roll.  What I didn’t expect was for them to be given the power by the university to control who speaks and who does not.  I left shaken to my core.

For some perspective, I’ve tried to bear in mind California Governor Jerry Brown’s remarks to the pro-Israel community at a recent JNF annual conference.  He said don’t let your detractors get you down.  Your cause is just, so stay focused and positive and keep moving toward your goal, meaning keep building a strong Israel.  Great advice.  And, in light of his sympathy for our cause, please consider dropping him a line.  I speculate he’ll be interested to know what the California State University system is doing under his watch.

About the Author
Aaron Parker served as Executive Director of Jewish National Fund, Pacific Northwest, from 2011 to 2015.
Comments